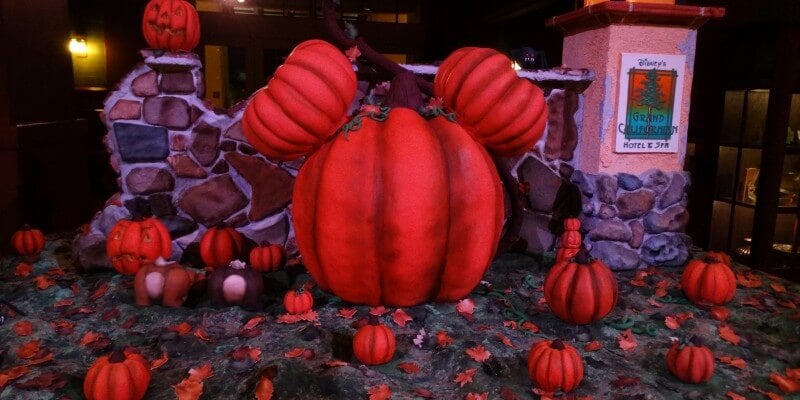 Most Disneyland Resort regulars know when and where the seasonal decorations are going to show up in the parks. But to the more attentive and thorough guests, there are a few slightly more off-the-beaten-track locations where you can find some very cool holiday adornments. You just have to figure out where to look.

One of the most reliable places is the enormous lobby of the beautiful Grand California Hotel & Spa, located just to the west of Disney California Adventure, a quick step from the Downtown Disney District. The Christmas decor is lovely there every year, but they also know how to do Halloween right. Last year the lobby’s centerpiece was a giant marshmallow “Tree-t” that drew crowds who were dazzled by its intricate details while they searched for Hidden Mickeys.

This year’s display is no less impressive: a so-called Pump-“Cake” Patch, decked with edible jack o’lanterns, a huge Mickey-shaped pumpkin, and even a couple of familiar-looking chipmunks hiding from the Halloween frights.

According to the sign posted next to the colossal cake, these are the ingredients you’d need to create your own: 85 pounds of Rice Krispies, 48 pound of marshmallows, 34 pounds of butter, 55 pounds of milk chocolate, 180 pounds of fondant icing, 300 pounds of powdered sugar, and 54 pounds of egg whites. That’s a lot of food!

See how many of the cake’s thirteen Hidden Mickeys you can spot in the video above and the photos below, and be sure visit Disney’s Grand Californian Hotel & Space at the Disneyland Resort during this Halloween season to get a closer look!