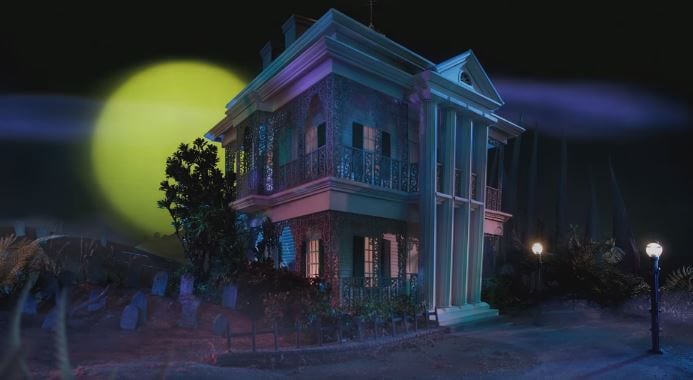 Why did the Robot Chicken cross the cemetery? To get to the Haunted Mansion of course.  The spooktacular collaboration between the Mouse and the makers at Robot Chicken (Stoopid Buddy Stoodios) materialized four stop-motion commercials for Disney XD. This quartet of ghostly goodies is set in that familiar rest home for the spirit realm: The Haunted Mansion.  Each complete with chilling thrilling sounds from the Mansion, familiar tombstones and a few additional spirited surprises. The ethereal advertisements promote Disney XD shows Star vs. The Forces of Evil and Pickle and Peanut. Haunted Mansion fans should be grinning in ghoulish delight as these Disney XD characters come face to face with Madame Leota, the Hatbox Ghost, Hitchhiking Ghost Ezra and Constance the Bride. According to HITFIX the happy haunts will materialize throughout the month of October:

Monday, October 3 (8 p.m. ET/PT – during the series premiere of Milo Murphy’s Law – Star and Pony Head (of “Star vs. The Forces of Evil”) stumble into the wrong dimension and disturb Madame Leota from her restful trance.

Monday, October 10 (6:30 p.m. ET/PT during a Halloween-themed episode of Pickle and Peanut) – Pickle and Peanut search for their lost keys in the famous Haunted Mansion graveyard where they meet brand new ghost Baby Boo and the infamous Hatbox Ghost.

Monday, October 10 (7:30 p.m. ET/PT during a Halloween-themed episode of Star vs. The Forces of Evil) – Star and Marco come face-to-face with Ezra the Hitchhiking Ghost.

Monday, October 17 (8 p.m. ET/PT during a new episode of Milo Murphy’s Law) – Pickle and Peanut stumble into the attic where Constance the Bride is awaiting her next victim. –HITFIX