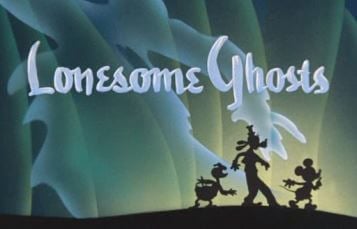 For fall fiendish fun, fans need to look no further than the Walt Disney Company for frightful family fear films.  Gathered (six feet?) below are five fearsome favorites from the Mouse.

The Skeleton Dance (1929) – In this Ub Iwerks/Carl Stalling entry, creepy classical music is transformed into one of Disney’s Silly Symphonies: The Skeleton Dance.  In this black and white cartoon, several skeletons creep back to life and frolic in the cemetery.

The Haunted House (1929) – Mickey manages to meander into a haunted house where the spirits demand he joins in a spirited symphony of sorts. Animation aficionados might notice a few familiar frames in this feature; portions of the cartoon contain recycled bits from a similar Silly Symphony: The Skeleton Dance.

Lonesome Ghosts (1937) – This spirited classic was actually released closer to Christmas in 1937. Mickey, Donald, and Goofy are in business as the Ajax Ghost Exterminators when they are called into action to investigate a haunted house.  Fans of the 1964 Walt Disney album, The Thrilling Chilling Sounds of the Haunted House, should recognize several of the sound effects used in the short film. Lonesome Ghosts was also featured in the Disney video games “Mickey Mania” and “Epic Mickey.”

Trick or Treat (1952) – It’s Halloween night, and Donald pulls some pranks on his nephews. Fortunately, Witch Hazel happens to observe the offense and offers up a bit of haunted hi-jinx as payback.

What is your go-to boo from Disney for the haunt season? Share your favorite(s) in the comments below.

For Disney Merchandise, CLICK HERE to shop only at ShopDisney.