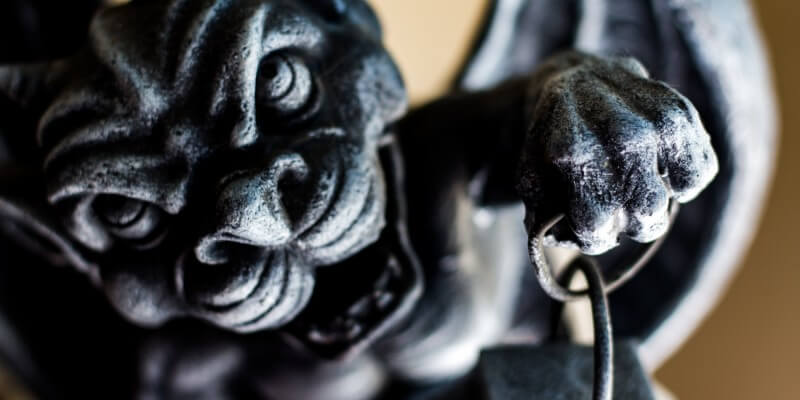 Halloween, a time for trick or treating, jack-o-lanterns and haunted houses, dates back to Celtic times some 2,000 years ago. It is the end of the year, harvest time, the sun dies and winter takes over. It is also the time of year when the realm of both the living and the dead overlap, when ghosts are said to materialize and wander about.  With that simplified historical reference it is no surprise that some of our manufactured nightmares and spooky mazes are also haunted by spirits of the dead. Whether drawn by the diverse and intense range of emotions from a theatrical scare-actor cast or tied to the history of the attraction’s location, ghosts seem to enjoy the energies of a haunted attraction. Collected below are a fearsome foursome of eerie examples of ethereal energies and the haunted attractions they are believed to inhabit. Having enjoyed the privilege of working in Orlando’s Terror on Church Street, I’ve witnessed this creepy crossover on more than on occasion. From unexplained phenomenon to apparent apparitions, the 1880’s hardware store that evolved into a haunted attraction was truly haunted. Actors querying a Ouija board were allegedly acknowledged with the reply, “I know you from Terror, I know you from the attic.”  The attic was just one of the many sets on site that left cast members on edge. Guests separating from their group were never found (and believed to be ghostly in nature). The spirit of a little girl is said to have haunted the halls, seen on many occasions by both management and actors. Terror on Church Street called the space home from 1991 to 1999.  It was my experiences there that inspired me to learn more about the paranormal, eventually creating Orlando’s first haunted history tour.

Terror on Church Street, however, is far from the only haunted attraction with ghostly guests.  Gathered here, for this Samhain edition of Fav Feared Five, a quintet of dark amusements with a few added apparitions are presented for your paranormal perusal. Established in 1895 by medium George P. Colby, the sleepy spiritualist community that is Cassadaga is located about half an hour northeast of Orlando, Florida. This peaceful camp is home to the Colby Memorial Temple, the Andrew Jackson Davis Educational Building, Colby-Alderman park, Caesar Forman Healing Center, camp bookstore and the Cassadaga hotel.

According to the Cassadaga Spiritualist Camp Guide Book, “Spiritualism has no dogma or creed, just a simple set of nine principles to help guide our lives.” The very nature of a spiritualist camp that is home to healers and mediums invites the arrival of spirits from all walks of life.  The hotel in particular has been investigated by paranormal groups and is said to be home to the spirit of a little girl. Then there’s Arthur the Irish tenor who lived in room 22 of the hotel; he’s still around according to guests and investigators.  The scent of his adult beverage and cigars is sometimes accompanied by a polite, yet unseen, tap on the shoulder. This year Sideshow Nightmares has added the Halloween haunt Coulrophobia which will run from Thursday 10/27 through Halloween. See our story on this haunt here. Visitors brave enough to enter the haunted maze are also encouraged to stay the night at the host hotel and just maybe come face to face with a real apparition?!

Eastern State Penitentiary/Terror behind the Walls Built in 1829, this bleak and decaying former prison is now a museum dedicated to its former incarceration incarnation. Severe and inhumane punishment and even torture were the norm when the site was built. Disembodied voices, shadows moving about, ghostly faces, whispers and phantom footsteps are just a few of the freaky phenomenon that haunt the cellblocks. According to what Gary Johnson, an employee of the museum, told NPR: In the early 1990s, he had just opened an old lock in Cellblock 4 when he says a force gripped him so tightly that he was unable to move. He described a negative, horrible energy that exploded out of the cell. He said tormented faces appeared on the cell walls and that one form in particular beckoned to him. (Source: NPR – full story here) For this year, their 25th, two new attractions were added to macabre mix: Lock Down: the Uprising and Quarantine: 4D.  ITM featured the 2016 Terror behind the Walls and its six sinister haunted attractions in a recent article (see details here).  Terror behind the Walls runs through November 5th.  Purchase tickets and find details of their Halloween haunts via their website.

The Haunted Mortuary of New Orleans Just three miles from the history French Quarter rests Mystere Mansion.  This Victorian dressed elegant home at 4800 Canal Street has been host to themed parties and various special events.  Built in 1827, this iconic mansion – situated next door to the cemetery, was a residence for several families until it was sold and turned into a funeral parlor in 1930.  Hiding behind the Victorian dressing of the elegant home (which doubled as owner PJ McMahaon’s home) was an autopsy room and an onsite crematorium.  The establishment hosted an estimated 20,000 funerals before it closed in 2003, where it sat vacant for another three years. Eventually the property was purchased and renovated to become the Haunted Morturary/Mystere Mansion attraction.

According to the Haunted Mortuary’s website:  It seems that many of the souls that passed through the old PJ McMahon building…never left. A phantom woman in white was often seen on the top floor crying for her husband who had long since passed on. Legends told of a tall well-dressed man who appears when he believes people are disrespecting the cemeteries that lie beyond the walls of the home, admonishing the offenders to silence. The spectral forms of two rambunctious children, a boy and a girl, had been known to play pranks on the unsuspecting living. A former mortician was often seen by employees, continuing his bloody work in the bowels of the basement. Footsteps and whispering voices supposedly carried throughout the building when no one was there. Tales traveled far and wide of poltergeist activity, of pieces of furniture moving on their own, while shocked eyewitnesses stared in disbelief. These were just a few of the stories that had reached the ears of paranormal investigators over the historic mansion’s life. Celebrating ten years of fear, the Mortuary is an intense haunted attraction which also features five interactive escape rooms: Serial Killer’s Lair, The Game Room, Embalming Room Zombie Escape, The Ghost Lab and Treasure Hunt. The haunt has a rich backstory which has been expanded over the years of operation, with this year’s “theme” only listed as REUNION. Read Master Ravencroft’s story and the fictional history of haunt here.  The Mortuary runs through November 5th; get your tickets here. Cunard’s luxury liner the Queen Mary launched in May of 1936. Known for its first class service and accommodations, she was the considered the greatest ocean liner in the world. Celebrities and heads of state graced her decks for numerous transatlantic adventures. The vessel served as a troop transport during WWII and after an additional twenty years of service made her last voyage Halloween of 1967, eventually docking at her final port in Long Beach, California. The vessel now operates as a floating hotel, museum and three world-class restaurants.

She’s also very well known for being haunted. Women in 1930’s bathing attire have been seen in the area of the (now unused) second class swimming pools (sometimes accompanied by the sounds of water splashing), disembodied laughter has been recorded in the same area (where Jackie, the little girl who drowned in the 2nd class pool is often seen, sometimes accompanied by wet footprints); in what was the first class lounge, a woman in a white gown has been spotted dancing alone in the corner of the room; in the engine room a crew member is seen and disappears near watertight door 13 (allegedly having been crushed to death by said door, during a 1966 drill).  Other apparitions appear in the first class cabins as well water running on its own at night, lights turning off and on and the cry of an unseen baby have been heard.  These are just a few of the over 150 ghosts gathered aboard the vessel (which is said to, in addition to the horrors of war, have seen nearly 50 deaths on board during its history).

Details of these paranormal disturbances can be found on the Legends of America website.

Check out ITM’s full review of Queen Mary’s Dark Harbor, along with a few of our videos of this haunted attraction below. Originally a one room school house, the site became a sanatorium for tuberculosis patients in 1910, at the time housing up to 50 patients. The site was expanded in 1924, opening as a Tuberculosis hospital in 1926 able to accommodate 400 patients.  The cure of this horrible disease brought the closing of the hospital in 1961. For another 19 years it sat empty, reopening in 1962 as a geriatric facility until its complete closure in 1981. Abandoned until its purchase and renovation in 2001, the site became a source for local ghost stories – several of which centered on the body chute in the building. Reports of a man in white seen in the kitchen (accompanied by the scent of cooking food); tales of phantom footsteps, doors opening/closing on their own and numerous apparitions surrounding room 502 where several deaths are said to have occurred (the fifth floor was the mental ward) are just a few of the terrifying tales associated with this former hospital.  (Source – Prairie Ghosts Read more harrowing supernatural sightings here) This former sanatorium hosts a Halloween haunted house as a fundraiser for the location, which is also a museum.  Now in its 23rd year the Waverly Hills Haunted House offers the option for a VIP guided exploration of the upper (aka haunted) halls prior to experiencing the haunted house.  The Halloween fundraiser runs through Saturday October 29th.  Tickets can be purchased here.