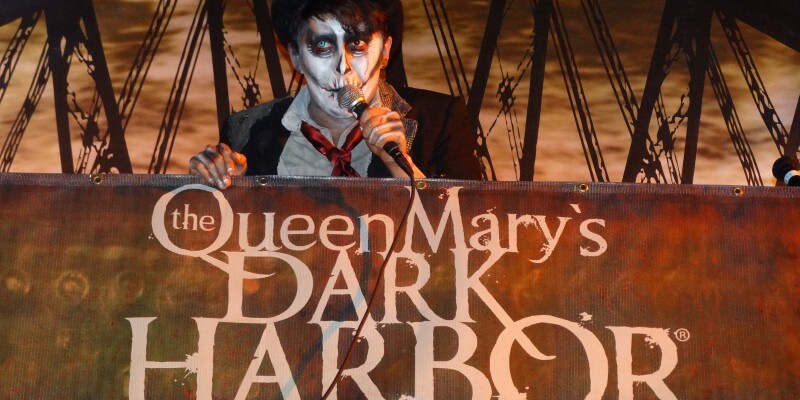 If you live in the Southern California area, there’s no shortage of haunted Halloween events at your fingertips. Between Knott’s Scary Farm, Universal Studios Hollywood’s Halloween Horror Nights, and even the somewhat tamer Mickey’s Halloween Party at Disneyland, there are plenty of scares competing for your hard-earned money and limited October leisure time.

Queen Mary’s Dark Harbor began in 2010 (replacing Queen Mary Halloween Terror Fest and Haunted Shipwreck) and takes place aboard and around the famed 1930s ocean liner permanently docked in Long Beach Harbor. I’ve attended the event for the past three years and found that the quality of the experience can vary. The first time I went I absolutely loved it and thought the idea of building haunted mazes inside the ship itself was brilliant, but last year I was disappointed, facing extremely long wait times for attractions that were lackluster in my opinion compared to the previous year’s offerings.

The 2016 iteration of Dark Harbor, I’m pleased to say, is a marked improvement. I had the pleasure of attending the media preview for the event last Thursday and I can say I had a wonderful time. I thought all the mazes were all well-executed (and on average, significantly longer than most mazes at both Scary Farm and HHN,) the new ones were very impressive, and even the returning ones were polished and packed with more scares and better design.

My favorite of all this year’s mazes was the new entry “Lullaby,” which focused on the Queen Mary’s long-standing “Scary Mary” ghost story — the tragic tale of a little girl who drowned in the ship’s creepy abandoned pool.

The best of the returning mazes is probably “B340,” named after the ship-turned-hotel’s most supposedly haunted room. Any of the three mazes aboard the ship itself are worth visiting, as again the sheer concept of using such a unique location for a Halloween event is what makes Dark Harbor so appealing in the first place.

The best maze off of the ship is the new “Intrepid,” set first in a spooky ghost train and then in a ghoul-infested shipyard. This maze, along with “Circus,” as shown below, is located inside the giant dome that used to house Howard Hughes’ Spruce Goose airplane, so it has plenty of room to immerse guests in a sprawled caged-off environment, adding to the inescapable feeling of being trapped among the baddies. It’s a thrill.

“Circus” is returning once again to Dark Harbor, but has been redesigned with a new layout and a lot of cool new effects. I especially liked the disorienting spinning tunnel and getting lost in the mirror maze. If you have a fear of clowns, this may be one you might want to avoid.

“Soulmate” is another new maze on the ship itself, but the passageways are a little too dark and the theming just a bit too muddled to make it one of my favorites. Still, it features some neat imagery and an eerie tone that will stick with you despite the maze’s other shortcomings.

The only outdoor maze this year is the returning “DeadRise,” set in a sprawling sinking battleship. It’s effective every year, and it remains so. I was fortunate enough to get to walk through the maze before sundown and got a much better look than usual at many of the impressive details. The scare actors in this one really know how to intimidate you.

Overall, I’d say this year’s Queen Mary’s Dark Harbor is definitely worth going to, although I would say to try and get there earlier in the season and also to arrive early to the event on the night you attend. From previous experience I know it can get pretty crowded. But as far as unique Halloween haunts go in Southern California, Dark Harbor is once again up there among the best.