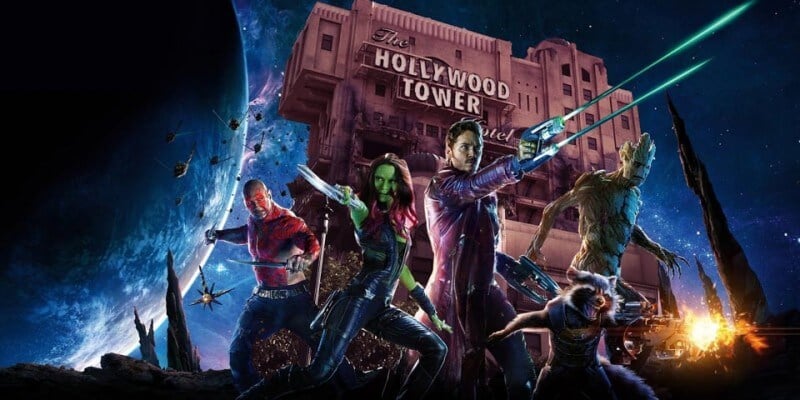 In the very late hours of last night, The Twilight Zone Tower of Terror was stripped of its signage. Shots from the Mastercam, a live feed of Disneyland Park from the top of Anaheim’s Howard Johnson, broadcast the removal as it was in process. Back in July, it was announced that the attraction would be receiving a Marvel superhero makeover featuring the Guardians of the Galaxy.

Guardians of the Galaxy: Mission Breakout, as the ride will be called, will take Guests through a harrowing experience where they must save the Guardians from the clutches of The Collector.

Fans of the former version of the attraction will still recognize many things about the ride. The track and exterior structure will remain intact as it does in many other Disney attraction makeovers (think Test Track, Frozen Ever After, or Buzz Lightyear’s Space Ranger Spin, for example). However, the primary element of any ride is the theming, and this (as well as a new drop sequence) is the main element that will be transformed.

The ride experience in its Hollywood Tower Hotel form has already been partially removed. It is currently operating in a mode Disney calls “Late Check-Out” that enables Guests to ride the attraction completely in the dark without any visual signs of the Twilight Zone theming. However, that version of the ride will permanently close on January 2, 2017, so that construction on the makeover can begin.

The new version is scheduled to debut alongside its film counterpart, Guardians of the Galaxy Vol. 2, which will open May 5th, 2017.

Photo Source: Behind the Thrills