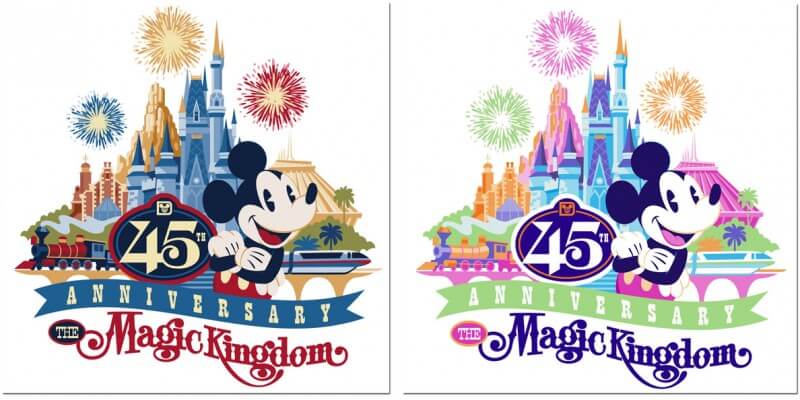 At 9:30 a.m the festivities starts with a special Magic Kingdom 45th anniversary ceremony held at the Cinderella Castle stage. The ceremony will feature music, speeches and Disney characters.

Special anniversary treats will be offered at the Main Street Bakery and at Gaston’s Tavern. We can almost guarantee that a celebration cupcake will be on hand for excited anniversary attendees! There will also be a 45th Anniversary Celebration Dog from Casey’s Corner, topped with potatoes, shredded cheddar cheese, bacon, fried onion straws and a chipotle-ranch drizzle. For merchandise fanatics there is a whole range of cool items to check out, most of it’s already available the Emporium. Just for the day Emporium will also have on hand a limited supply of Magic Kingdom 45th anniversary “I Was There” t-shirts and trading pins.

In the past for these type of anniversary celebrations guests have also received commemorative buttons and park maps when they entered the park. Most likely we will see that once again for this celebration.

Confirmed from WDW that all guests will get this button upon entry to ALL four parks on Saturday October 1, not just Magic Kingdom. pic.twitter.com/ILIltDhrr0