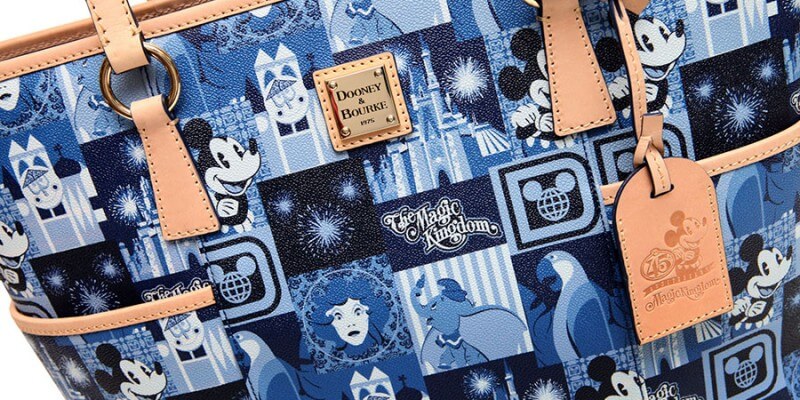 On October 1 Magic Kingdom will be celebrating its 45th Anniversary and with this grand occassion we will be receiving some pretty awesome commemorative merchandise. In an effort to most likely stop insane merchandise on the day of the anniversary Disney has decided to release most of the products already on September 22. The Disney Parks Blog shared a couple of the 45th anniversary pieces with us.

Most of the logo products, like the apparel pictured below, will be out in select merchandise locations at Magic Kingdom on September 22. Best places to check for 45th anniversary apparel, open edition pins, home goods and more will be at these locations:

Famous fashion brand Dooney and Bourke will be releasing a collection for the occassion and you can already find two of the bags on the Shop Disney Parks app. The rest of the collection will debut at the Emporium on Main Street, U.S.A. starting September 22. On the day of October 1 itself several items will be released in the Emporium at Magic Kingdom. Guests and Annual Passholders will find “I Was There” shirts. A limited edition pin (edition size of 3,000), and a limited edition retail MagicBand (edition size 4,500) will also be available for purchase. Across the street at Uptown Jewelers on that day, you will be able to find a commemorative 45th Anniversary dangle charm by PANDORA Jewelry. Finally, guests can visit the Disney Parks online store from October 1-9 to find limited release t-shirts celebrating the 45th Anniversary. Several of the shirts will feature classic attractions that have been at Magic Kingdom since 1971. Please allow 3-5 weeks for delivery. To order these shirts, please visit DisneyStore.com/ParkEvents. What Magic Kingdom 45th anniversary merchandise is going on your must buy list?