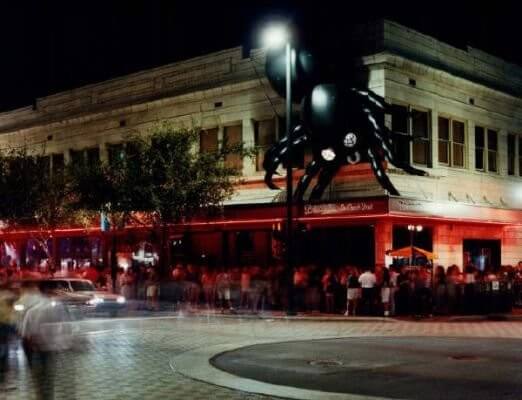 Central Florida has been a tourist destination long before Disney, SeaWorld, and Universal moved in. Mermaids have called Weeki Wachee home since 1947 (and still do).  Gatorland was established in 1949; the 110-acre theme park still welcomes guests at its location on South Orange Blossom Trail in Orlando. Busch Gardens opened in Tampa as “The Dark Continent” in 1959; the brewery tour and beer sampling has since disappeared but remnants of the original park remain (including the log flume, elephant ride).  Central Florida and its nearby surroundings is now home to 15 major theme parks and water parks and dozens of other smaller attractions.  Over the years several have come and gone.  This list is dedicated to the five of my favorites.  It does not include dinner theaters (which we might just discuss at another time). . .

5. Stars Hall of Fame Wax Museum
Located just off of Interstate 4 near SeaWorld (the original building can still be seen from I-4), was a hopeful wax museum opened by the Six Flags company.  At the time, 1976, the company was trying to get into the smaller attraction business.  Having acquired the California-based Movieland Wax Museum in 1970, Six Flags was eager to emulate the experience in Orlando. Stars Hall of Fame Wax Museum opened with 200 wax figures in over 100 different scenes.  Exhibits like the bridge and crew of the USS Enterprise (including a Pepper’s Ghost effect of Mr. Spock beaming in), Frankenstein’s monster, Charlton Heston and chariot from Ben Hur, and Laurel & Hardy failed to excite audiences. Attendance was sparse and the attraction struggled. Sadly, with added competition from EPCOT in 1982, the operation never realized optimal attendance and was sold to Harcourt Brace Jovanovich (HBJ) in 1984.   HBJ (who also bought Circus World and Sea World), closed the attraction and eventually turned it into offices for SeaWorld. (Source: Florida’s Lost Attractions).

4. Circus World
When it was announced in 1973, Circus World was intended to be both a theme park and the winter home to Ringling Brothers Barnum and Bailey Circus. When the venue first opened a year later, there was just a large structure resembling a large circus tent – this housed a theater, circus museum and mockup of what the park was to become. Eventually shows, carnival rides and live circus act were added just before the park and circus were sold to toymaker Mattel who added a wooden rollercoaster, additional circus themed shows, live animals and a petting zoo.

Mattel later sold the small struggling park to Jim Monaghan, a developer who brought in yet another roller coaster and Ferris wheel. In 1986, just over 10 years since it opened, Circus World was sold to HBJ. The park was closed and rides repurposed for a new theme: baseball. Boardwalk and Baseball gave the venue a mere three additional years of life as HBJ failed and they sold their theme park assets to Busch Entertainment, who promptly closed the park on January 17, 1990 as it was losing money. (source: Florida’s Lost Attractions)

3. Six Gun Territory
Just north of Orlando, in Ocala Florida, Six Gun Territory opened its gates in 1963. Capitalizing on the popularity of TV westerns, the 200 acre park was a big success. Featuring daily stage coach robberies, shootouts, train ambushes that were set in a realistic recreated western town, the park was a popular destination. The authenticity of the town’s buildings and the live action events echoed America’s enthusiasm for the Wild West, but it was also the reason for the park’s eventual demise. With the advent of television shows like Lost in Space and Star Trek, interest in the Old West became old hat. Location played a role in the closing as well as Ocala was just too far away from the booming theme park mecca that Orlando was becoming with the opening of Walt Disney World and SeaWorld. The park closed 21 years after it opened. (source themeparktourist.com)

2. Mystery Fun House
This kitschy, fun attraction opened near International Drive (on Major Boulevard) in the heart of Orlando in March 1976. An iconic giant wizard’s head adorned the façade of this family-centered adventure. Featuring a mirror maze, tunnels, swaying suspension bridge, rolling barrel and 11 other features, “the Chambers” was the main indoor component to Mystery Fun House. A magic shop and game room were also housed in the attraction. The outside featured Mystery mini golf (which evolved into the Jurassic putt course). Starbase Omega added the adventure of indoor laser tag where guests could battle each other and ‘take out’ static targets on planet (which was reached via a simulator ride).  The Mystery Fun House Pizza and show, mimicking the styles of Chuck E Cheese, was a late addition to the experience.  The Mystery Fun House was also the back drop of a scene from the 1989 movie “Parenthood”.  The attraction closed its doors in 2001 and is now a check-in hub for Westgate Resort guests.  The building (sans the giant inviting wizard head) still stands across from the Kirkman Road entrance to Universal Studios. (source Wikipedia)

1. Terror on Church Street
With the success of their Spanish horror adventure Pasaje de Terror, Monsters and Monsters productions set their sights on Orlando for their next groundbreaking haunted attraction. More of a theater company – complete with professional lighting, fog, sound and movie quality sets, Terror on Church Street featured a company of full time actors when they opened in 1991 in downtown Orlando.  Featuring two stories of frightful vignettes and a dark winding maze, the year-round attraction drew long lines of visitors from around the world. During peak Halloween season, anxious guests would wait several hours to brave the eerie experience. The infamous haunt would remain open until May of 1999 when skyrocketing rent for downtown space and dwindling visitors forced closure of the attraction.  Horror fans nostalgic for a taste of Terror can still find the attraction in operation at Blackpool Pleasure Beach in Lancashire, England. The attraction, also called Pasaje Del Terror, was designed by the same team who created the Orlando legend.  (source: Theme Park Tourist)

There have been many more attractions that have vanished from the Central Florida area, but these are my favorite five.  Tell us your favorite “missing” attraction or share an experience at one of those listed above in the comments.