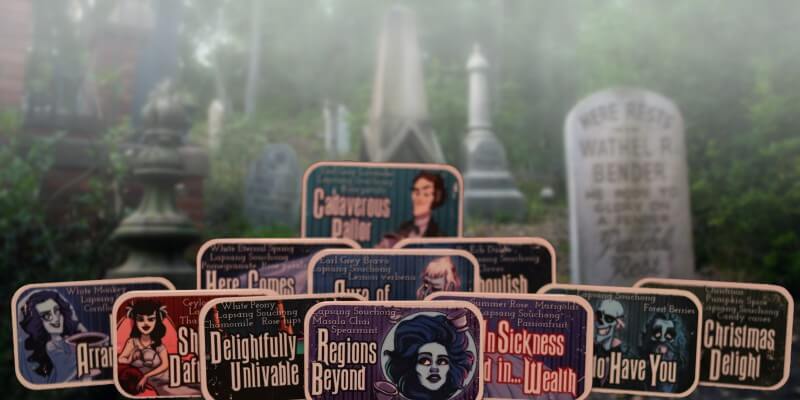 Imagine the delight in our dark little hearts when we discovered the Haunted Mansion inspired teas at Adagio. These ethereal elixirs were found among Adagio’s fan-inspired blends. Noticing several options dedicated to our favorite dark ride, our attention was drawn to A SWINGING WAKE 999 as we gazed upon the delightfully spirited fan art based on that hallowed haunted haven. Thus, we opted for a sample pack of each of the eleven varieties in this collection created by Emma Mosier (this is not to be confused by the single flavor “Swinging Wake”).

Here, for your paranormal perusal is our review: Aura of Foreboding – Earl Grey for dry wit, Lapsang Souchong for a moldering sanctum, Lemon Verbena for a sardonic twist.

The Earl Grey Bravo had just the right amount of mellowing power to tame the smoky Lapsang Souchong for a smooth yet just slightly bitter tea. With a little sweetener this might make a good, but strong breakfast beverage. The earl grey and rose petal accents would have been sufficient for an enjoyable cup of tea, however, the smoky tones of the Lapsang Souchong detract from the experience (both in flavor and aroma). The addition of sweetener did little to rescue this beverage. Much as Jack took over Christmas, Jack’s candy canes seem to have taken over the tea. It seems, though that the pumpkin king didn’t bring enough pumpkin spice to the blend as there was no hint of its flavor in this selection.  Fortunately, the villainous Lapsang Souchong was not as powerful here, allowing the candy cane mint addition to rule the roost in both taste and aroma. Thus the experience was much like enjoying a cup of tea NEXT to a fire instead of IN one. . . A pinch of sweetener brings out the candy cane further and takes this tea into the realm of truly being a Christmas Delight. Delightfully Unlivable – Chamomile and White Peony for resting in peace, Lapsang Souchong for a moldering sanctum, and rose hips for remembrance.

As a chamomile tea, the flavor was also somewhat unavailable here. Fortunately, the Lapsang Souchong was better behaved for this experience as most of the familiar smokiness from that element was reserved for aroma over flavor. Overall this tea was still somewhat bitter, something that a teaspoon of sugar couldn’t save. Dying to Have You – Forest Berries to follow you home, Hojicha for a restless spirit, and Lapsang Souchong for a moldering sanctum.

Another delightful surprise; this light berry flavored tea was balanced with an earthy base and virtually none of the overpowering smoke-filled flavor of most of the other teas in the collection. The addition of a small amount of sweetener served to further coax the berry flavor out of hiding. Final Arrangements – White Monkey to follow you home, Lapsang Souchong for a moldering sanctum, Cornflowers for a lingering taste.

If final arrangements include a crematory, than this tea nails it perfectly. It seems that the White Monkey and Cornflowers struggle for any kind of attention in this overly smoky tea. The lapsang Souchong again aggressively assaults the senses with a one-two punch in aroma and flavor. Unfortunately even the otherwise gleeful spoonful of sugar did nothing to put out the raging forest fire for this flavor. The Lapsang Soughong element in this blend overpowers everything else (though listed, there is no trace of the flavor of clove). This smoky, bitter tea has all the charm of a roaring campfire. Definitely has a very robust charred wood flavor that might go well with a hearty stew or strong cheese. After adding some Italian Sweet Cream to the mix, the drink is much more palatable with almost the impression of crème’ brulle’, but still has a smoky after taste (suggest a hazel nut creamer or adding some nutmeg). This loose blend also has potential as a scented sachet for its campfire charm. Hints of floral flavor flow through the otherwise lackluster experience of this brew. Fortunately, the normally overpowering essence of the smoky lapsang souchong is not prevalent. While adding sweetener did help bring out the pomegranate, it was not enough to pull this tea to an enjoyable state. In Sickness and in . . . Wealth – Summer Rose for a decaying bouquet, Passionfruit for lost love, Lapsang Souchong for a moldering sanctum, marigolds for avarice.

The only flavor coming from this blend is-sadly, the Lapsang Souchong (or as we here in the tasting kitchen are starting to call it – the smoke monster). Unfortunately, this smoky substance severely overpowers any semblance of passionfruit or rose (which perhaps serve to lessen the burnt aftertaste of some of the other teas in this collection). Even the addition of sweetener failed to summon the “Wealth” and left only the “Sickness” of this smoky beverage. Regions Beyond– Masala Chai for materializing the disembodied, Spearmint for clarity of mind, Lapsang Souchong for a moldering sanctum.

Again another tea overpowered by the smokiness of the Lapsang Souchong, which is sad because the faint aroma of the spearmint is almost lost in the smoke flavor. As for the chai element of this tea – it seems to have dematerialized completely. Adding an Italian Sweet Cream did bring out the Chai from hiding but otherwise, turned the beverage into a smoke flavored cream. Adding half a teaspoon of sugar to the mix did bring the spearmint out of hiding. Shrouded in a Daft Disguise – Ceylon Sonata for looking alive, Thai Chai for a wild side, Lapsang Souchong for a moldering sanctum, and hibiscus for a woman who’s not what she seems.

Still running in the smoky realm, the Thai Chai does seem to mellow the Lapsang Souchong’s smoky presence to a palatable mellow level. The experience is finished with the memory of hibiscus, yet leaves this foolish mortal with a tart taste in the end (for which adding a sweetener had little effect). So, there it is, a re-animated review of the 11 fiendish flavors in the Swinging Wake collection.

Unfortunately, the overpowering use of Lapsang Souchong in many of the flavors took the tea from a moldering sanctum and into the smoldering realm of Rome burning. It’s difficult to determine if this was an unworldly unbalancing of the mixture or just a the misfortune of a somewhat spooked smoke-filled selection of blend ingredients. That should not necessarily reflect on the vast variance of blends that Adagio has in their catalog.

The fan based division is a delightful drive through imagination and potentially pleasing palatable potions (looking at you “Butterbeer”). We did sample a couple of other mansion inspired flavors  (E ticket and Haunted Mansion) from Adagio that were not part of this collection. Fortunately, they did NOT contain Lapsang Souchong and were quite a bit more enjoyable. UPDATE: – We’ve learned that there is a second set of fiendishly fun flavors (four) from extremely talented (the art work on these selections is her own creation) Ms. Mosier – “Doorless Chambers 999“.

ALSO– direct from Ms. Mosier (talented tea hostess), the Lapsang Souchong element of these teas is being reexamined to be re-blended as a much less overpowering ratio.