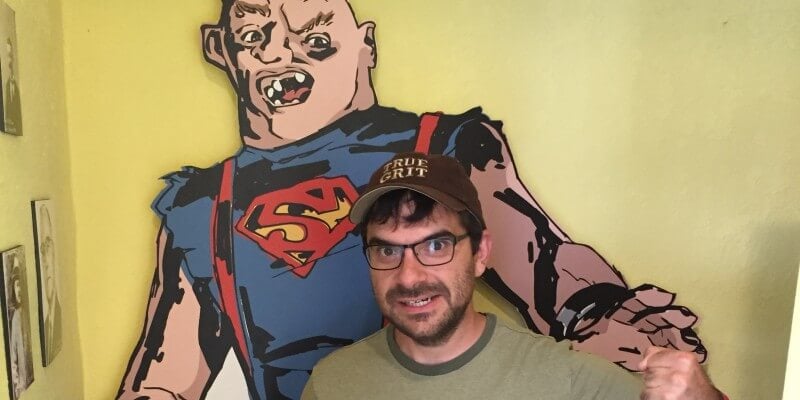 Hi, it’s Mike. I’ve been reporting for Inside the Magic since April of 2015 (the first event I covered was Star Wars Celebration in Anaheim last year.) In the fall I was brought aboard the website full-time as part of the new team, so if you’re a regular here you’ve probably seen or read my work.

Last week I took my first real vacation since that time began, and my now-fiancee and I used the opportunity to fulfill a lifelong dream of mine and visit some of the locations from the 1985 movie “The Goonies” (directed by Richard Donner, from a story by Steven Spielberg) on the coast of Oregon.

I was born three weeks before the end of 1979, so you might say I am a quintessential child of the 80s. And to me, “The Goonies” has always represented what it was like to be a kid during that period. It’s not a flawless work of art and it certainly didn’t win any Oscars, but more than any other movie, I feel like “The Goonies” perfectly captures the spirit of adventure, optimism, and occasional sense of danger that accompanied childhood in the Reagan era. You might say that if the characters in “The Goonies” weren’t in a Spielberg movie, they would almost certainly grow up as fans of Spielberg movies.

Last year was the 30th anniversary of “The Goonies,” and I unfortunately didn’t make it up to the commemorative fan celebration in Astoria, Oregon, where most of the film’s exterior scenes (and some interiors) were shot. So when my then-girlfriend* and I started planning a camping trip to the Pacific Northwest, I knew I had to insist on a pilgrimage to discover the locations I knew so well from the film. *Yes, there was also a non-Goonies-related, but still highly-successful marriage proposal that happened during a different leg of this trip.

Our first stop was the Oregon Film Museum, formerly the Clatsop County Jail, and site of the opening scene of “The Goonies.”

Directly across the street from the museum is the historic Flavel House, one of Astoria’s most famous buildings, and another location from “The Goonies.” This is where Mikey’s father worked, and stood on the front porch waving as the Goonies set off on their adventure.

While in town we also passed by the bowling alley where Chunk (Jeff Cohen) spots the police chase in the opening scene, and the marina where Martha Plimpton’s character Stef was introduced.

But our next stop on the tour was perhaps the most famous building in “Goonies” lore– the home where Mikey (Sean Astin) and Brand (Josh Brolin) grew up, on the hills overlooking the marina. Unfortunately because of some disrespectful visitors over the past few years, the section of road leading up to the Walsh house has been declared off-limits to Goonies fans. We of course honored the wishes of the homeowners and kept a safe distance.

Fortunately there are still several more exciting spots to visit for fans of “The Goonies” who want to plan a trip to Astoria. Next we drove down the Oregon coast a bit to Cannon Beach, where the movie’s opening off-road truck race took place.

From there it’s just a quick drive up into Ecola State Park, where Mikey and his friends discover the entrance to One-Eyed Willy’s ancient pirate treasure caves underneath the Lighthouse Lounge restaurant (which was a set built for the movie and demolished immediately after production) on the ocean cliffside.

Before the trip I made sure to purchase a replica of Mikey’s Spanish doubloon from an Etsy prop dealer. I knew I wanted this moment to be perfect. The trick was finding the exact right spot, and of course having a wonderful fiancee with a lot of patience to take the picture.

And after I shared that picture on Facebook, my boss, the benevolent Mr. Ricky Brigante, mocked up a color-corrected version in the movie’s aspect ratio. It was most appreciated.

The reverse shot of the “lining up the rocks” scene was always a composite, and much of the cliff trail at the State Park has eroded away since the 80s, but we were still able to find a spot in the woods where the famous rocks align with the doubloon. The end result doesn’t quite match with the location of the restaurant, but it was still an amazing moment that I had been waiting to accomplish since I was six years old.

“The Goonies” was a formative movie for me, and I have loved it for over thirty years. Getting to visit some of the shooting locations was high on the list of things I wanted to do in my lifetime, and now I’m glad to say I managed to check it off the list.

If you’re a fan of the movie, or just enjoy beautiful coastal towns and seaside views, I highly recommend visiting Astoria, Oregon.