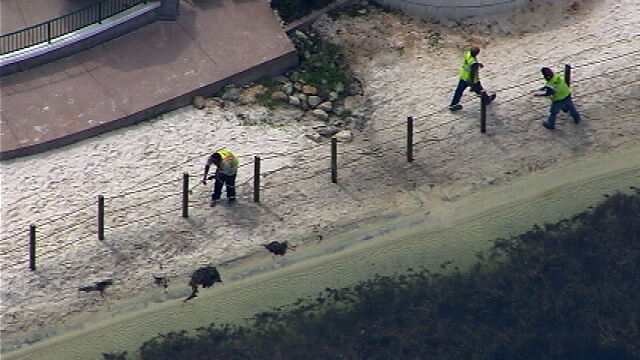 Walt Disney World has wasted no time in building a fence at the Seven Seas Lagoon just days after a toddler was dragged into the lake by an alligator and died after drowning.

As reported by the Palm Beach Post, workers were spotted along the shore Friday afternoon near the area in which the alligator snatched the two-year-old as he waded near the shore at the Grand Floridian Resort & Spa earlier this week.

“We are installing signage and temporary barriers at our resort beach locations and are working on permanent, long-term solutions at our beaches. We continue to evaluate processes and procedures for our entire property, and, as part of this, we are reinforcing training with our Cast for reporting sightings and interactions with wildlife and are expanding our communication to Guests on this topic.” All the beaches at the resorts in Walt Disney World remain closed as of Friday and new signs warning about alligators in the area will also be installed.

Several gators have since been removed by wildlife officials from the same body of water where the attack happened.