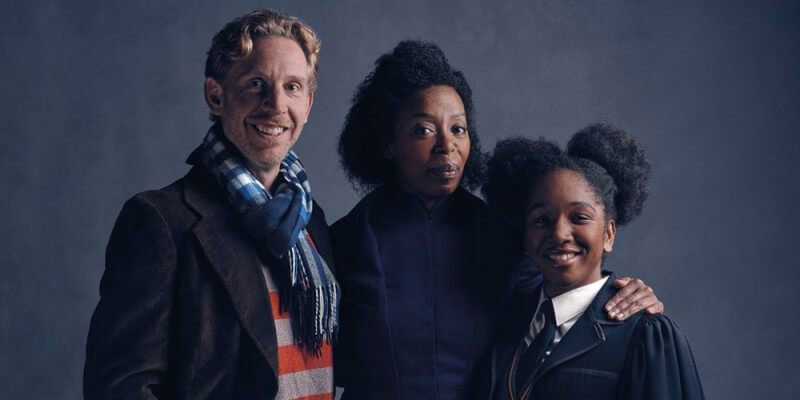 We recently presented the first look at the adult Potter family from Harry Potter and the Cursed Child, and now it’s time to meet the Granger-Weasleys! That’s right, Ron, Hermione and their daughter, Rose, are joining the fray in the brand-new first look from the upcoming stage play. This tale will serve as the eighth Harry Potter story, and will pick up right after the epilogue of Harry Potter and the Deathly Hallows.

Paul Thornley and Noma Dumezweni stand tall in the family portrait as Ron Weasley and Hermione Granger. She apparently kept her last name. Cherrelle Skeete plays the spry Rose Granger-Weasley. It’s also worth noting that the Granger-Weasley’s other son, Hugo, is not pictured as he isn’t of Hogwarts age when the play’s first act takes place. To me, the pictures bring an air of security, and I definitely feel more comfortable knowing that we very well may have the right cast for the job. Do you agree? Skeete revealed a few interesting little tidbits about her character:

“Rose is ambitious, obviously her mum is Hermione so she’s got a lot to live up to. I think they’re quite similar in the fact they put a lot of pressure on themselves. And she just wants to do the right thing.

Rose is like her mother, but more secure, more grounded. She was born to wizards and knows her place in the world. Cherrelle plays her perfectly: bossy but deeply lovable.” On the subject of Ron and Hermione, there is no bigger fan of Thornley and Dumezweni than author J.K. Rowling herself. Regarding Dumezweni’s reveal as Hermione, Rowling commented, “I saw Noma workshop the part and when John Tiffany told me he’d cast her, I was overjoyed. She gets Hermione inside out.” Turning her attention to Thornley’s portrayal of Ron, Rowling noted, “Ron in his forties isn’t very different from Ron in his teens, except that his feet hurt a bit more. Paul’s so funny and brilliant in the role.”

Harry Potter and the Cursed Child begins preview performances on June 7 at London’s Palace Theatre. Scholastic will release the script book of Cursed Child on July 31.

So what do you think of the unveil? This is our new generation of Harry Potter actors, folks, and I think we should be super excited about it! Let me know your thoughts in the comments below!