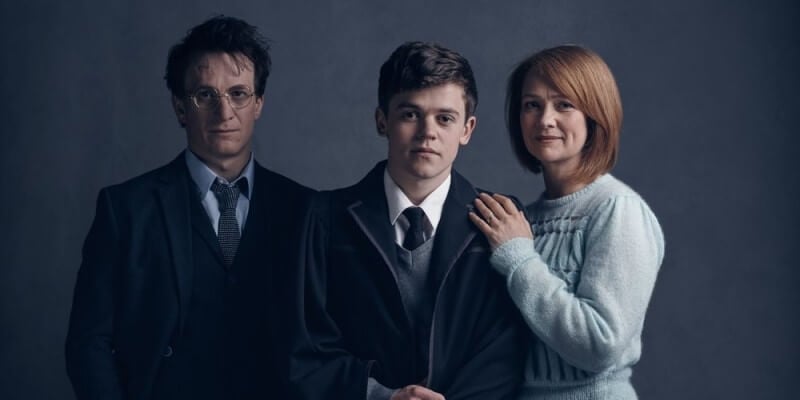 Since the upcoming “Harry Potter and the Cursed Child” play was announced, fans have been anxiously been awaiting a look at the grown-up Potter family. Today Pottermore has released a first look of the stage play cast and it showcases the adult Harry Potter, Ginny Potter and their young son Albus Severus. The character trio is played by Jamie Parker (Harry), Poppy Miller (Ginny), and Sam Clemmett (Albus Severus). According to the Pottermore site, we will see more characters revealed over the next few days, presumably Paul Thornley’s Ron and Noma Dumezweni’s Hermione. When asked about actor Jamie Parker’s transformation, J.K. Rowling said: ‘He simply is Harry now. There’s a kind of relief in watching him, he gets it so right.’ Rowling was just as happy to see Poppy in character. She said: ‘I think a lot of people would like to have Poppy’s Ginny for a mother. Kind and cool, exactly as I imagined her.’ ‘Cursed Child’ begins previews on June 7 at the Palace Theatre in London. The script book will be released by Scholastic on July 31.

Comments Off on PHOTOS: First look at the adult Potter family from ‘Harry Potter and the Cursed Child’ play