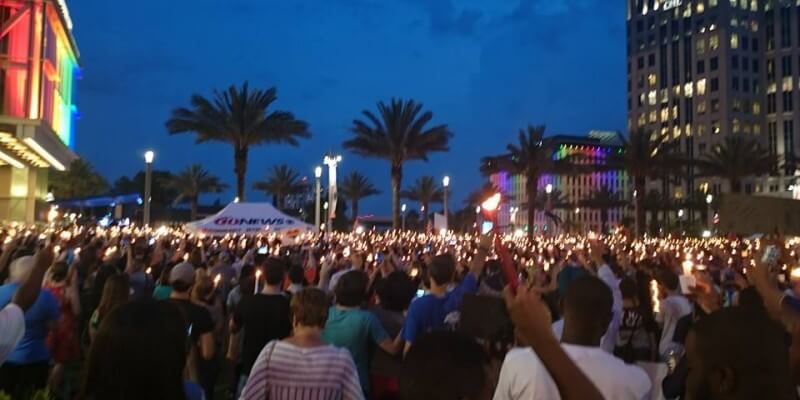 As the world reacts and processes the tragic news coming from Orlando this past Sunday morning, a community (and the world) comes together in love and support.

Central Florida is known for its theme parks, attractions and International Drive corridor of restaurants, bars and museums.  For many, this happy vacation destination was their only view of the City Beautiful.  But on Sunday morning, June 12th , these magic kingdoms and universal thrills took a back seat as the spotlight turned to the horror and senseless chaos as that had just erupted at Pulse nightclub near Downtown Orlando.

Details of the attack continue to command attention on the news and social media even now.   In a single act of hate, 50 innocent lives were senselessly taken.

The community of Orlando and the world, still in shock, immediately came together to prove that hate does not and will not thrive.  The outpouring of support shown by our city’s residents, whose world had just been thrust into the global spotlight and the world-wide solidarity standing with the Central Florida city, has been a beacon of hope and evidence that love is stronger than hate. ITM stands strongly and proudly in the Orlando community that we call home.  We mourn the loss of friends and share the shock and pain of our Orlando family.   This cowardly attack on the LGBT community was an act of hate – but love outshines hate here. As such, we have gathered below a small sampling of the outpouring of humanity witnessed since Sunday morning.  It is our desire that these images and stories will provide a beacon of hope and love for those who are suffering.

Theme park employees from both Disney and Universal shared their support for those affected, as far as Shanghai Disneyland: Solidarity and support poured in from around the nation and the world: Help arrived from companies like Jet Blue and United Healthcare (United offered FREE counseling to ANYONE affected by the violence; details here). The Orlando Weekly has compiled a list of support and aid (from free medical help for victims who do not have insurance to counseling and much more).  The list also compiles a resource of outlets for those who want to help. Our thoughts are with our friends in Orlando at this very sad and tragic moment. Our love and support to the Orlando LGBT Community and our deepest condolences to those who have lost loved ones.
John Barrowman
Scott Gill Love and tribute was offered to Orlando in Sunday Night’s Tony awards.  Lin Manuel Miranda dedicated a sonnet to Orlando.

Perhaps the most impressive showing of love and support came from the people of Orlando!

Almost as soon as the call went out for the urgent need for blood donors, stations around Central Florida were swamped with willing donors, many waiting hours in long lines to give. As those donors waiting in the Florida summer heat others came by offering food, water and sunscreen.

I arrived at 10:00 for my 10:15 appointment. I am still waiting to give blood. However, I have witnessed about 3 months worth of food from local businesses, grocery stores, and random people showing up through this door.

SO MUCH FOOD. And everyone is so nice, I’ve been asked if I need fruit snacks, granola, pizza, barbecue, fried plantains, crackers, Gatorade, doughnuts, cookies, apples, mixed nuts, everything. There are just troops of people flowing in and out asking if we in the donation line need anything.

Funny part is, most of the people in line brought their own snacks and water bottles out of courtesy for the blood bank. Several vigils were also set up around the community.  On Monday night, the City of Orlando hosted a gathering across from City Hall, in the lawn of the Dr. Phillips performing arts center.

Team members of the Wizarding World of Harry Potter have announced gatherings – a raising of the wands – at both Universal Orlando and Universal Studios Hollywood (9pm EST for Orlando on Monday and Tuesday in LA at 6pm local time).

Orlando-based Disney fans, podcasters, and blog owners are gathering at hub, near the partners statue at Walt Disney World on Saturday June 18th: The heart-warming truth is that love is stronger than hate.

To the members of the LGBT family and staff of Pulse nightclub – you are not alone, as you can see the world stands with you. To the friends and family in Orlando there is hope.

Be strong and love one another. Please, respectfully, share your thoughts and support in the comments below.