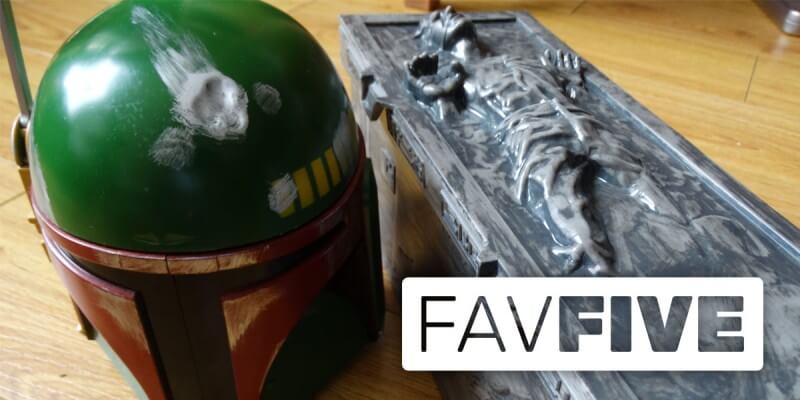 Welcome to the second-ever installment of Inside the Magic’s new feature “FAV FIVE,” in which each of our contributors will create lists of five of their favorite examples in one specific topic within in a wide range of popular culture. (Be sure to check out Adam’s inaugural horror-movie entry HERE.)

For my  first “Fave Five,” I’m going to kick things off with a Disneyland-related list. Anyone who visits Disneyland regularly knows there is a huge wealth of collectibles available for fans to take home with them, for a price. In this list I’m going to present my top five personal favorite Disneyland keepsakes that I’ve acquired through the years. This puzzle was available at the park up until pretty recently, but is certainly discontinued now that the map will be inaccurate. I love it for its simplicity: the artwork is straightforward, there’s a nice quote from Walt in the corner, and the borders around the edges are “burned,” almost like a pirate’s map. It wasn’t very difficult to put together for anyone familiar with the layout of the park, but it’s the perfect item for fans of jigsaw puzzles and Disneyland. Trader Sam’s Enchanted Tiki Bar is one of my favorite places to hang out at Disneyland Resort. It has a wonderful ambience, great food, friendly bartenders, and they offer some very cool painted ceramic collectible mugs, each of which comes with a particular drink (it costs an extra fee if you want to keep the glass.) Note: the Nautilus pictured here is only available at Trader Sam’s Grog Grotto in Walt Disney World, but it’s so cool I had to include it. This full-size Haunted Mansion attraction poster was purchased and ornately framed by a friend of mine, who then let me hang on to it when he later ran out of wall space. I believe you can still have these posters printed out for you at the park’s Disney Gallery in Town Square. These items were first a 2015 Star Wars Weekends exclusive at Hollywood Studios in Orlando, and then were on sale at Disneyland for a short period thereafter. I’m a huge, huge “Star Wars” fan, and “The Empire Strikes” is my favorite movie in the original trilogy, I couldn’t resist these. They’re perfect for serving food and beverages or simply storing assorted knickknacks. As someone who has always been fascinated by Disneyland and theme-park history in general, I was thrilled when this DVD was released over a decade ago. It features the full opening-day ceremony of the park that was broadcast on television in July of 1955, plus a slew of bonus features covering Disneyland’s story up through the 50th anniversary. This DVD is now long out-of-print, but determined collectors can still track it down on eBay. Similarly, the “Designing Disney’s Theme Parks” book below is one of my favorite thorough histories of the parks, starting with Disneyland and following through to Walt Disney World and the first few overseas parks. I’ve always been particularly interested in the design and architecture of Disneyland’s decor, and this book is a must-have for anyone who shares the same passion. Stay tuned to Inside the Magic for more “Fave Fives,” in addition to our regular coverage!