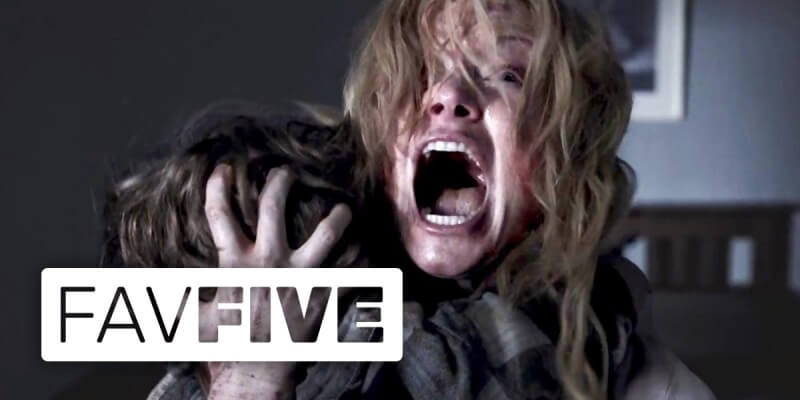 Welcome to Fav Five, a new column in which our writers explore their top five favorite anything (in no particular order). Movies, attractions, video games, television episodes — if it’s fun, and people can get involved, nothing is off limits. Each of our writers have their own tastes and special interests, so hopefully this will be a good opportunity for you guys to get to know us as well!

Alright, let’s do this thing: I’m kicking off our very first Fav Five with a look at my top 5 favorite modern horror movies on Netflix (as of the date of this post). I’m emphasizing the word “modern” because there are some classics like the Hellraiser franchise and The Exorcist available for your streaming pleasure, but I wanted to focus on some potentially lesser-known frights. Without further ado, let’s get started!

Being an actor in Hollywood can be tough, and times can get pretty desperate. This movie centers around a hopeful young starlet as she uncovers the twisted origins of Tinseltown’s elite, and bites off more than she can chew when she makes a strange agreement in exchange for fame and fortune. This is one of those “slow burn” movies with phenomenal actors and an incredible eye for detail. The flick is on a constant mission to one-up itself every time things start getting disturbing — and they do get disturbing. To me, it’s a modern classic and deserves the highest praise.

Nothing is stronger than the bond between mother and her child. That’s basically the fuel behind this entire film about a broken family whose world is turned upside down when a strange story book comes to life and they find themselves hunted by a creature called “The Babadook”. Half of the fun is watching all the ways in which the creature slinks its way into the minds and hearts of its prey. I won’t spoil anything, but if you’ve been involved in the horror community at all since 2014, there’s a good chance you’ve already heard the hype. This one’s a keeper.

Creep is a found footage film about a young filmmaker who finds an ad on Craigslist to film what he thinks is a documentation of a dying man’s wish to his child. Mark Duplass is horror gold as we begin to watch an impossibly-horrible situation unfold for a dude who just needed money and thought he was doing the right thing. The tension is thick, and you will definitely need a shower afterwards to wash off all the craziness. Word of caution: beware of anything in a wolf mask.

The Taking of Deborah Logan

This one’s another found footage film about a crew documenting a strong case of Alzheimer’s in an old woman. This is one of those movies that just seems to hit all the right notes: the talent, the directing, the writing, everything involved just seems to fall into place to create a fright-packed casserole of clever camerawork and unforgettable imagery. Director/writer Adam Robitel lays on the movie magic with a small budget to craft characters and situations that are guaranteed to make you hold your breath, cover your eyes, and chill you to the core. I can’t recommend this one enough.

Corin Hardy’s masterpiece might be one of the most original pieces of horror I’ve seen in years. The movie is about a family who has just moved into a remote mill house in Ireland. It doesn’t take long for things to start getting twisted when they find themselves in a fight for survival against hoard of demonic creatures living in the woods. Both the acting and the creature design are all superb, and the story never loses sight of the human element, even while things seem to escalate and become more fantastical. The scares are relentless, the scenery is beautiful, and the tone of the film will keep a baseball-sized knot in your stomach long after the credits roll.

There are plenty more incredible horror romps on Netflix. If these five don’t do it for you, I urge you to check out the following: We Are Still Here, Pontypool, V/H/S/2, Troll Hunter, Tucker and Dale vs. Evil, The Houses October Built, and Hush. So what do you think? Do you have any suggestions for me? Sound off in the comments below, creeps!