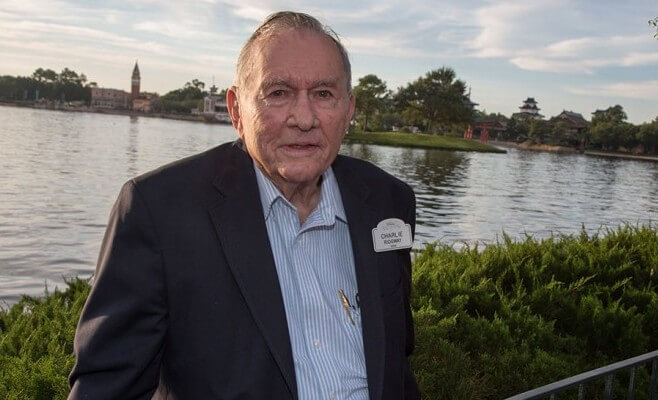 Ever wanted to dine with a Disney legend? Well you may just have your chance. D23 revealed today that Disney is offering the exclusive opportunity to have a nice little lunch with theme park legend, Charlie Ridgeway in the American Adventure Parlor at Epcot!

If you’ve been face-deep in Disney Parks history ever, you’re in for a treat. Here’s the official release:

From Pirates of the Caribbean to Epcot and Disneyland Paris, Charlie Ridgway’s contributions to Disney Parks press and publicity have captured the attention and sparked the imaginations of millions of guests worldwide. Starting his Disney career at Disneyland park in 1963, Charlie would later be named director of press and publicity for Walt Disney World (then under construction), eventually planning more than 150 major press events at locations around the globe! Charlie was named a Disney Legend in 1999.

On March 18, D23 Gold and Gold Family Members are invited to a special afternoon with Charlie as a part of our Lunch with a Disney Legend series.

Guests will be treated to an intimate lunch inside the American Adventure Parlor at Epcot. During this exclusive event, D23 Members will spend time with Charlie and learn more about his fascinating career with The Walt Disney Company—from his work in public relations at Disneyland to the opening of Walt Disney World and, of course, working with Walt Disney himself.

Plus, a very limited number of tickets will be available for guests to dine with Charlie at the Disney Legend table.

This one-of-a-kind event will also include an exclusive gift created just for you!

Basically, if you care about the history of Walt’s vision in the least, this event is right up your alley. The price tag is $125 per person, plus a $5 per person processing fee. $150 per person, plus a $5 per person processing fee to dine at the Disney Legends table. If you can shell out the dough, it seems like one heck of an opportunity. Unfortunately, you’ll have to pay for your own admission into Epcot — but if this event means anything to you, there’s a pretty good chance you have an annual pass anyway. Right? Right.

You can grab your tickets HERE.