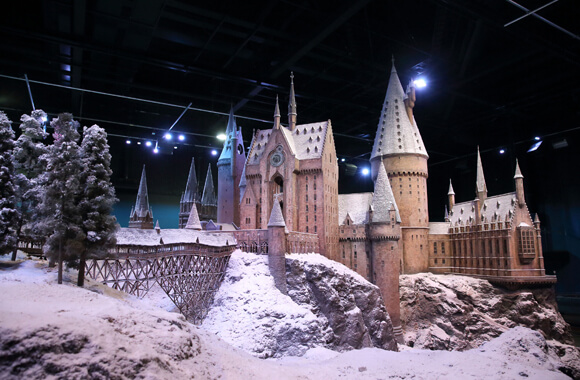 While the original Harry Potter films and books concluded over four years ago, fans continue to seek out any experiences that bring them closer to the wizarding world. With Universal about to open another Wizarding World of Harry Potter in Universal Studios Hollywood,  and the new “Fantastic Beasts and Where to Find Them” films in production, many fans are getting their wish.

However, for some lucky fans in London, a new experience was offered for the holidays. According to Entertainment Weekly, around 200 fans were given the opportunity to eat dinner on the Great Hall set at Warner Brother’s Studio Tour London facility.  The experience set them back about $350 per person, but it sounds like those who attended were more than game. In fact, EW reports the rather unsurprising detail that many of the fans dressed in their robes and cosplayed the event.

The set itself comprised of the Great Hall and the Weasley’s kitchen from the Burrow. Warner Brothers also dressed up the set for the Christmas season, hanging garland and  wreathes all around. Photo ops were set up by Universal so that fans could take pictures with iconic images of the films, such as Wesley’s Flying Car. The special event sounds like it was a dream come true for any Harry Potter fan. While Warner Brothers haven’t officially commented on whether the experience would return, it would be hard to imagine that it would not. After all, the tickets apparently sold out at lightning speed, meaning demand remains high for anything that brings fans into the Wizarding World. At the same time, it seems likely that Universal would benefit from implementing similar dining experiences. While eating at the Three Broomsticks and Leaky Cauldron are a dream come true, Universal might do well to take a page out of Warner Brothers book and offer a more immersive dining opportunity more in line with the “Be Our Guest” restaurant at the Magic Kingdom. Time will tell if Universal takes the hint, and with the always looming possibility of expansion, its certainly not inconceivable for the future.

The Wizarding World of Harry Potter at Universal Studios Hollywood is set to open on April 7th, 2016.