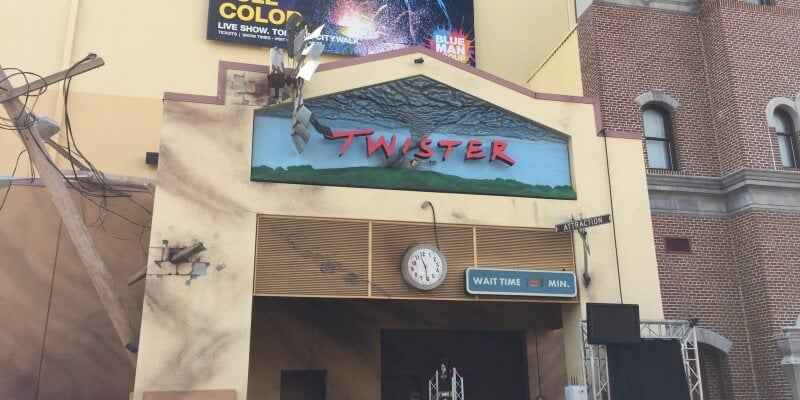 Just as its namesake, the news surrounding the closure of Twister hit as fast as a tornado, without any warning. There were the jokes when Jimmy Fallon made his first visit to Universal Orlando with the Tonight Show, that he was getting a ride and it was replacing Twister. But he’s a comedian, so it was taken with a grain of salt. Yet it was Jimmy himself who dished out the news, with confirmation shortly there after on the Universal Orlando Blog, that he in fact was getting his own attraction. It’s left more than a few heads scratching, but keep in mind what the brilliant minds over at Universal Creative have been churning out the past few years.

With the news, Twister: Ride It Out closed on November 1st, 2015, making way for the new ride titled “Race Through New York Starring Jimmy Fallon.” Little is known so far, other than the hints Jimmy listed during his show; smoke, water, 3D/4D and said to be scary, fun and exciting. He also went on to mention that his ride will be like the ones based on the Harry Potter films, but instead of Harry… it’ll be Jimmy, and in place of Hogwarts… it’ll be New York City. The current attractions is based on the 1996 Hollywood blockbuster drama starring Bill Paxton and Helen Hunt who play storm chasers researching tornados. The attraction, found in the New York section of Universal Studios park in Orlando, had replaced the Ghostbusters Spooktacular attraction with its opening in May of 1998 with a simulated tornado appearing right before the guests eyes. The sights, sounds, and feels of the attraction were heavily researched from experts in the field and meteorologists and a technological marvel for its time. The building houses its own atmospheric conditions and with guests experiencing rain effects, fire and a flying cow just for good measure. Little has been done over the years to update the attraction, keeping the same feel that it has had since opening day, which has also been a factor for the loss of repeatability amongst pass holders and returning guests. It’s an attraction that once you’ve experienced it, you’re not yearning for a swift “re-ride” so to speak, but it still remained a favorite amongst a core group. Though it’ll be missed by some… Twister has been one of those attractions that’s seen its time in the spotlight, and a makeover (or closure) has been long overdue.

Thanks for the memories Twister, its been a whirlwind of a time having you around.