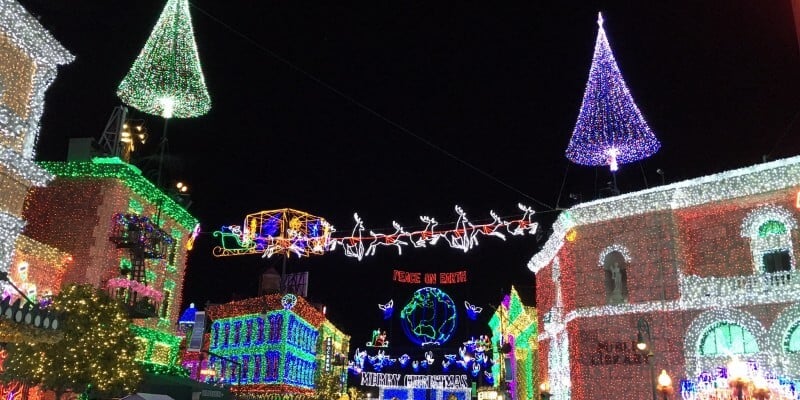 If you are like most, you are certainly disappointed that The Osborne Family Spectacle of Dancing Lights is in its last season at Walt Disney World’s Hollywood Studios. This annual event has been bringing holiday cheer to Guests for 20 years, and Disney recently announced that it would not be returning next year. However, it is making way for one of the most anticipated additions to the Florida property since EPCOT was announced……”Star Wars Land.”

Today, I wanted to point out some of the fun things to look for if you have the chance to visit the Osborne Lights before the plug is pulled in early January. I need to declare a SPOILER ALERT. I will be pointing out some of the “hidden” items found throughout the display. If you are the type of person who likes to find these objects on your own, I would suggest you stop reading and head directly to Hollywood Studios!

Many Guests walk through the streets of America for a few minutes and move along to their next attraction or show. However, there are so many fun things to look for that I suggest taking your time to get the most out of the experience. First off, Disney has continually added hidden Mickeys throughout the display, and the last unofficial count has them over 80. They can be found as tiny clusters of lights in the corner of a window, to a large classic Mickey in the middle of the big Christmas tree. You may even be able to find a “hidden” Nemo if you look closely!

Several objects are hidden in different spots each year. First and foremost is the purple cat. As the story goes, this Halloween decoration was accidentally included in the shipment of Christmas lights from the Osborne family. However, Disney thought it would be fun to include it in the display, and Guests enjoy discovering its location. This year, it is effortless to spot, as it is in plain sight. It can be found in a large window at the New York City skyline end of the street.

The next two perennial objects that are fun to look for are the leg lamp and Baby Sinclair. The leg lamp is a miniature version of the one that is in the movie “A Christmas Story.” Baby Sinclair was one of the stars in the ABC TV show “Dinosaurs.” They can both be found at the far end of San Francisco street, in a window on the left side. Unfortunately, this is also where the queue is for a PhotoPass picture, so you may have to look over the Guests’ heads waiting in line.

There are a few nice tributes to the Osborne family this year, and they are both on the right side of the street when looking toward the New York City skyline. First, you can find the Osborne stockings hanging over the fireplace. Then, as you continue up the street, you’ll find a nice window display not far from the purple cat. This display shows the history of the Osborne Lights in pictures.

The “Jesus in the Manger” display is appropriately located near the Peace on Earth globe. Although the Osborne Lights is primarily a Christmas celebration, there are some nice Hanukkah displays as well. Close to the Lights, Motors, Action end of the street, you can find a menorah, a dreidel, and a Jewish star.

There are few timely additions to the lights this year. With the new Star Wars movie on the horizon, it just made sense to include something from this franchise. You can find this lightsaber display on the left side of the street as you walk toward the NYC skyline. It is past the large Christmas tree and in a second-story window.

Finally, there is a nice little tribute to the 20th anniversary that includes Tinker Bell. Above the opening that takes you toward Pixar Place from the Streets of America, it can be found near the Studio Catering Company restaurant.

Hopefully, you will get the chance to visit Hollywood Studios in the next six weeks, and this article will enhance your enjoyment of the Osborne Family Spectacle of Dancing Lights. It will happen every night (starting at 6:00) until January 3rd, except December 9th. This annual event had an amazing 20-year run and will surely be missed.