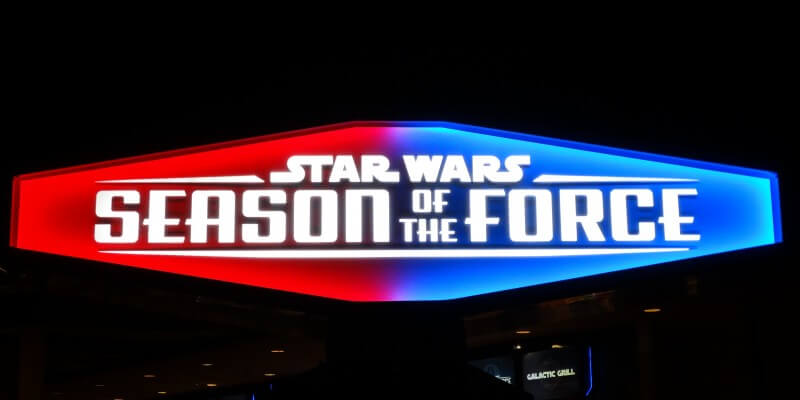 Tomorrowland shut down early at Disneyland Thursday afternoon so the media could finally get a peek at the changes that have been in development for quite some time. Yes, “Star Wars” has taken over the futuristic area of Walt Disney’s original Magic Kingdom for an extended (but temporary) event called Season of the Force, and the Imagineers have cooked up a lot of exciting attractions for the occasion.

It’s just enough to get fans excited for the new movie “The Force Awakens”, which is set to open in a little over a month, and to whet our appetites for the much larger Star Wars expansion coming much further down the line on the other side of the park. The first indicator of Season of the Force as you enter Tomorrowland is lots of new signage and banners, some of which has been up for a week or so now in anticipation of the event, and some which went up just over the past few days. It’s remarkable how much effort went into creating the utilities for an impermanent display, although it was emphasized several times during the preview that no end date for Season of the Force has been announced.

Our preview opened with the inaugural screening of “Path of the Jedi” in the Tomorrowland Theater.  The roughly ten-minute montage of scenes from all six existing Star Wars movies, plus a re-edit of the trailers for “The Force Awakens”, is emotionally stirring and a great way to start your Season of the Force experience. The next stop you should probably make is Hyperspace Mountain, an overlay of the ever-popular Space Mountain indoor roller coaster, in the grand Star Wars-style. To me this was the most immediately satisfying of all the Season of the Force offerings, as it incorporated projected footage of an exciting X-Wing vs. TIE Fighters space battle on to the already-thrilling ride, complete with synched-up Star Wars music (newly-recorded with the London Symphony Orchestra), sound effects, and even the encouraging voice of Admiral Ackbar. The biggest and perhaps most thoroughly engrossing portion of Season of the Force is Star Wars Launch Bay. Housed in the lower tier of the former Innoventions building (once home to the Carousel of Progress), Launch Bay is a showcase for all things Star Wars: prop, spaceship, and costume replicas from the original trilogy and “The Force Awakens”, a meet and greet area where guests can choose between the light side of the Force and the dark side, a huge merchandise area filled with tons of amazing collectibles, and an interactive play area where kids and adults alike can check out the Star Wars expansion for Disney Infinity, and even get a code to download exclusive levels to play at home. The entrance to Launch Bay is inspired by the opening title card and story crawl from the Star Wars movies. Last, but definitely not least among the main attractions at Season of the Force is Star Tours: The Adventures Continue. The motion-simulator ride, which was designed to be modular when it was overhauled several years ago, now includes a brand new scene that takes place on the planet of Jakku and even features surprise appearances by some new Star Wars characters.

And don’t forget to check out the specialty food and beverage items designed specifically for Season of the Force. Tomorrowland Terrace has been transformed into Galactic Grill, where you can grab a Darth Tamale for breakfast, or a First Order burger for lunch. Also available will be very cool Chewbacca steins, BB-8 sipper cups, and First Order TIE Fighter popcorn buckets. Also re-opening in December (though still under construction during our preview) will be Jedi Training, now subtitled “Trials of the Temple”, where kids will visit an ancient Jedi temple and confront new enemies.

Season of the Force makes Disneyland a must-visit locale for “Star Wars” fans this winter. Whether you’re gearing up for the new movie or you just want to revisit the feeling of the originals, Tomorrowland is the place to be for the time being. 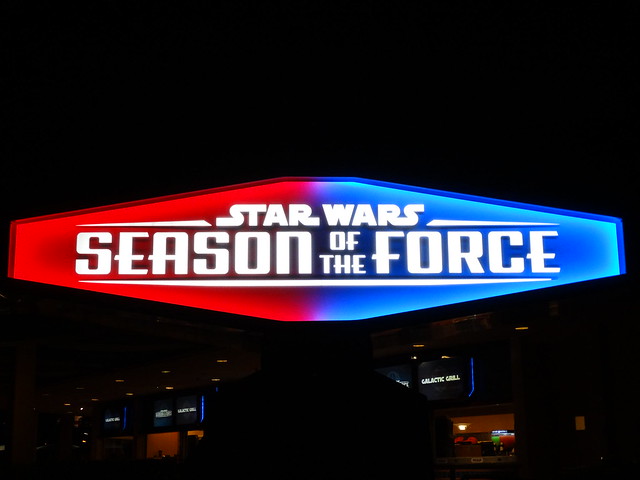