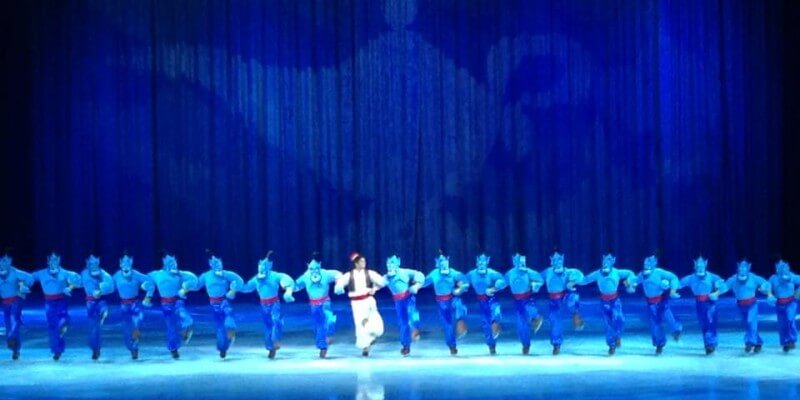 With “100 Years of Magic” Disney on Ice is trying to please both old and young Disney fans a like and with the performances that kicked off this weekend in Orlando I would say they do a pretty good job of it. The nationwide tour of “100 Years of Magic” will stretch well into 2015 with visits to many different cities.

Note: We were limited to shooting with cell phones and consumer grade point-and-shoot cameras.

With the “100 Years of Magic” show you will see fond retellings of Disney classics such as Aladdin and Mulan, Pixar fun with Finding Nemo and Toy Story and, of course, plenty of Frozen.

A warm-up skating routine kicks off Disney On Ice: 100 Years of Magic involving Mickey and Minnie and a little weird request for the whole audience to dance the “mouse dance”. It is a cute little warm-up but you could feel the audience getting antsy for the real show to start. The shows start out with a Disney classic: Pinocchio. A beautiful rendition of “When you wish upon a star” is performed by the Blue Fairy and Jiminy Cricket and then we have some dancing fun with Pinocchio in “I Got Not Strings on Me”. Scenes from Finding Nemo and Beauty and the Beast are up next with both stories mashed up into small segments, trying to retell the most important parts in a quick succession. It seems a little disjointed but Disney on Ice still pulls off showing some wonderful scenes from both movies. After this we get a short and sweet introduction to all the Disney Princess with Ariel, Cinderella, Tiana, Snow White, Jasmine and Rapunzel. The princesses get no real scenes from their respective movies but still come out to do a dance to their own theme songs. The main event, even if this show is called “100 Years of Magic”, is the very large portion of the show dedicated to Frozen. Elsa, Anna, Hans, Kristoff and Olaf all return to the ice to do a simplified retelling of their story but still including full numbers of “Love is an Open Door”, “Let it Go” and “In Summer”. Many adults in the audience may feel that Frozen has become overplayed but if you could hear the screaming excitement of all the kids in the audience you’d be hard pressed to believe that. After the intermission we jump straight back to some other lovable Disney movies like Aladdin, Mulan, Toy Story and Lion King. The Aladdin segment impresses with a real amazing performance of “A Friend Like Me” with tons of Genies dancing on the ice. Mulan and Lion King also get pretty long segments with some real cool effects and ice skating moves. Toy Story section was lacking a little bit in story but the dancing Green Army Men was still a hoot to watch out on the ice. When the big finale comes up you feel like you just got a crash course in Disney movies, in rapid succession, and seeing all the characters coming out on the ice you definitely get the feeling that you experienced a lot.

Disney on Ice : 100 Years of Magic feels like a show that tries to cram in a lot in the 2 hour show and some may feel that the whole Frozen section is very redundant after Disney on Ice quite recently had a whole show dedicated to just that movie.

But with so many impressive segments of other Disney movies this will be a great show for the Disney fan who grew up on a steady diet of classics such as Aladdin and Mulan. There is a real feeling in these parts of the show, especially with the combination of some beautiful ice skating and the Disney tunes we all know and love.

Of course there was also plenty of Disney souvenirs to bring home. Tickets are on sale now for Disney On Ice: 100 Years of Magic with performances stretching well into 2015. Visit DisneyOnIce.com for more information.

Thanks to Eric Andrew Hickok for some of the pictures.