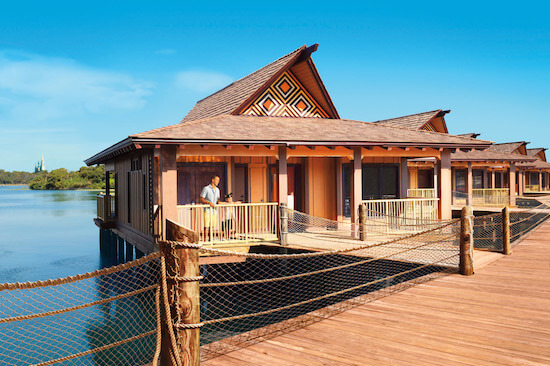 Sales will begin next week January 12 for current Disney Vacation Club Members for the new offerings at the Polynesian Village Resort at Walt Disney World and today Disney has revealed a first look at artwork revealing the inside of its latest unique DVC accommodations.

The first phase of the hotel expansion opens April 1, including Bora Bora Bungalows and the first Deluxe Studios.

The 20 Bora Bora Bungalows are being built on the Seven Seas Lagoon, sleeping up to eight guests in each. They feature two bedrooms and spacious living areas with beautiful views. Disney has also revealed concept art for updates to the Polynesian pool: Sales of the new DVC additions will begin February 9 for all other guests.

Also coming later this year to the hotel is Trader Sam’s Grog Grotto, currently under construction.