One of the greatest concentrations of tributes and inside jokes in a single attraction at Walt Disney World can be found at Star Tours. The queue areas are packed with secret symbols.

Among the most interesting tributes, one of the least known ones occurs almost immediately when you step into the queue. Just around the first bend, look to the wall on the right to find two plates (the photo here digitally adds a portion missing from the top, in the box on the right side). 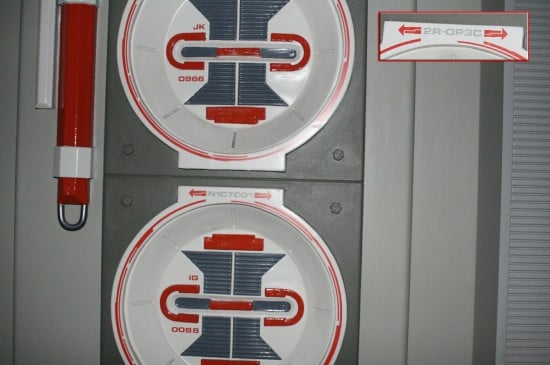 The top plate spells out R2 and C3PO in backward order and JK 0966, a somewhat surprising tribute to James Kirk, the main character of Star Trek, which debuted in 09/1966. The Trek reference is accompanied by a second one on the other plate, in the form of NCC1701 (numbers also in alternating order), the vehicle identification number for the U.S.S. Enterprise. To round out the Star Trek / Star Wars mishmash here, the bounty hunter IG88 also gets a nod.

On the big digital sign, watch for 1138 to defy logic and appear as a flight number twice (once for Coruscant, once for Chandrila). It pays tribute to THX1138, George Lucas’s first movie. 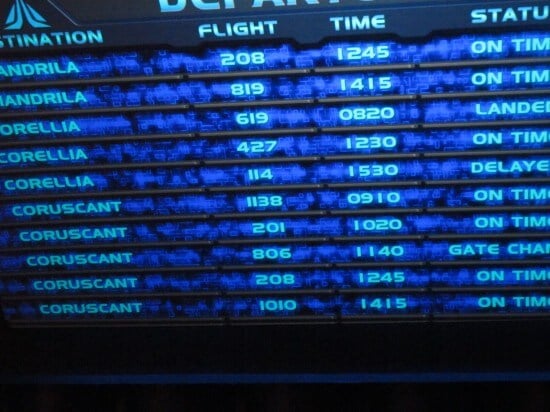 Other signs in the area honor Imagineer Tony (William) Baxter and the Los Angeles area code 213 (the sign says, with altered order, “213 babies”). 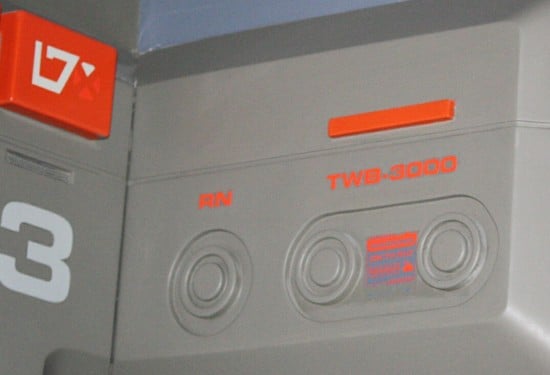 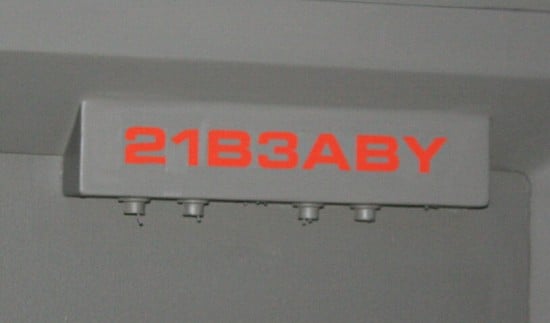 The Starspeeder is flight 1401, a common number in the parks since this is the street address of Walt Disney Imagineering in Glendale, CA.

The ship’s registry plate, near the bottom, uses the Star Wars Aurebesh language to spell out WDI, for Walt Disney Imagineering, prominently in the orange zone. 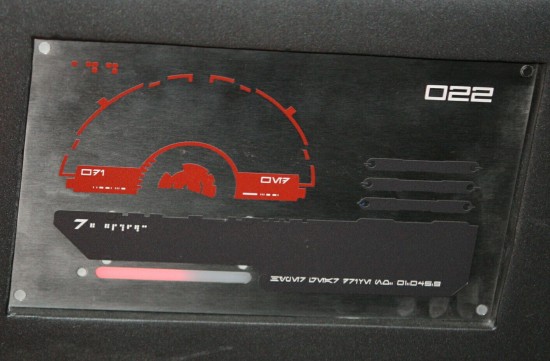 Coming around the bend to the next room, visitors see a remnant of the original Star Tours in the form of the robotic pilot Rex. Technically the new Star Tours is a prequel, so having the pilot here requires a fancy explanation. A sticker marks him as defective, so the idea is that he’s an experimental pilot not yet ready for deployment (the joke being that when he is deployed later in the original Star Tours, he still has problems!) 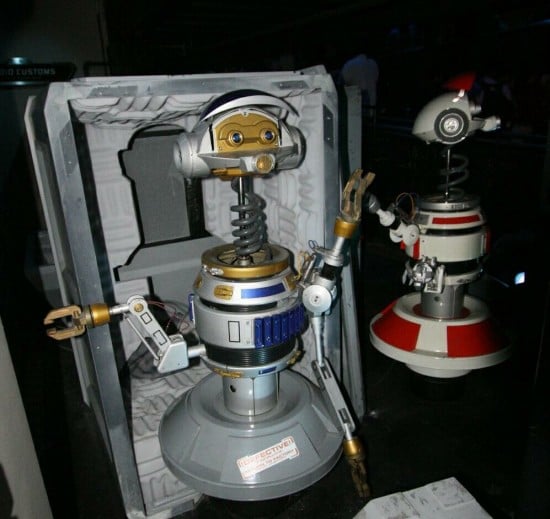 One sign on the wall here by the robots references the stormtrooper from the original Star Wars that “left his post” guarding the Millenium Falcon, TK421. 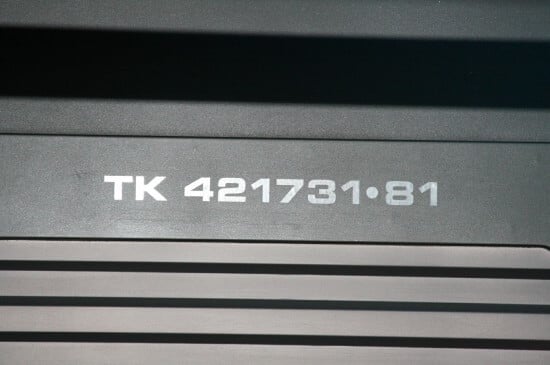 Another nearby sign lists Star Wars Dates, and each movie’s two-digit year (plus the Clone Wars TV show) opened.

Across the walkway is G2-9T, the talkative robot which avoids work. This droid was duplicated from the original Anaheim one (the California Star Tours opened first in 1987). In that case, the droid was actually an animatronic goose ripped out of the musical show America Sings, so it had its native webbed feet and tail still. When Star Tours was created anew in WDW, the designs were copied exactly. 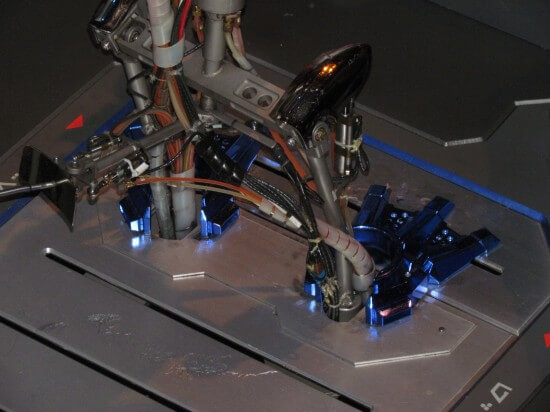 In the original Star Tours queue, G2-9T was listening to 107.9 on the radio, K-DROID. This invented station is given a call out in the refreshed queue. 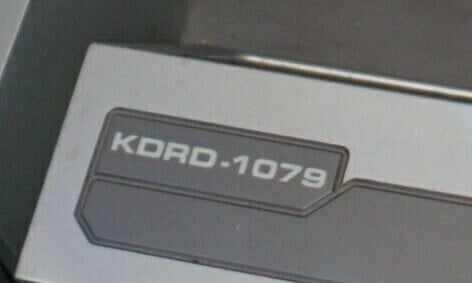 The opening date for Star Tours in Anaheim (Jan 9, 1987) is listed on a nearby sign. 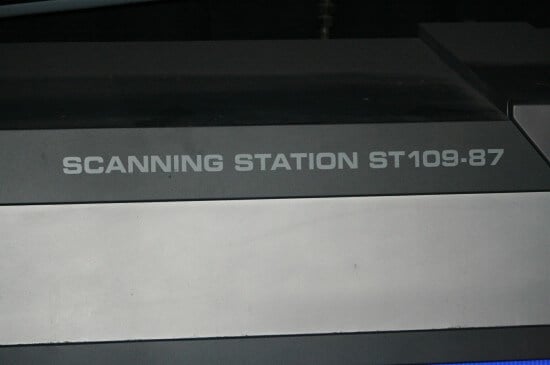 G2-9T is supposed to be scanning luggage, and the insides are visible to visitors. Almost every suitcase contains an inside joke of some kind, from Mouse Ears to the Haunted Mansion‘s Madame Leota. 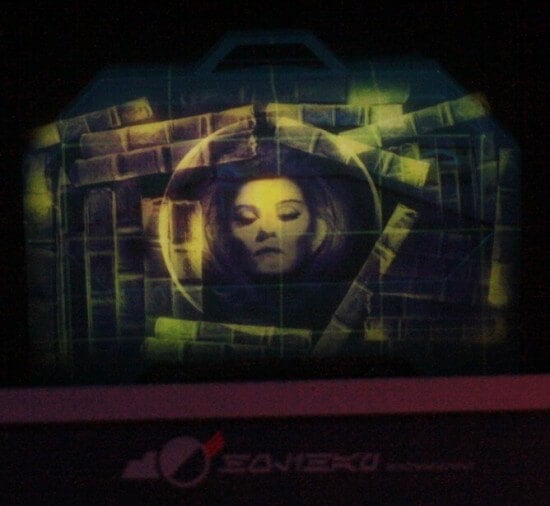 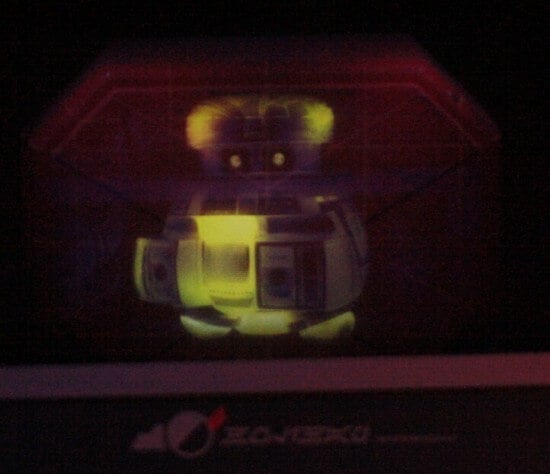 One image shows snowflakes, a microscope, an homage to Adventure Thru Inner Space, an Omnimover attraction at Disneyland replaced by the world’s FIRST installation of Star Tours in 1987. 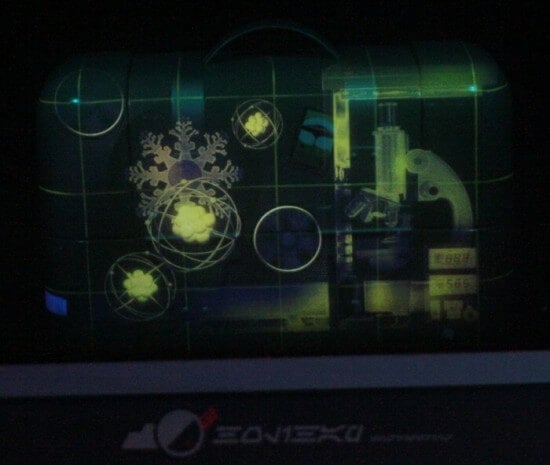 At the bend, look in the lighted window for JarJar frozen in carbonite, as well as R2-MK, a droid with mouse ears well known to visitors of Star Wars Weekends. 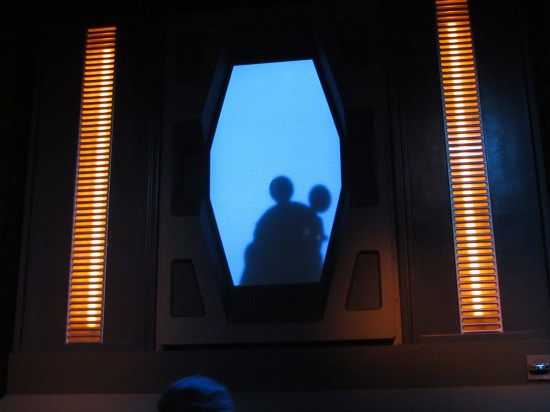 The G2 droid at the top is voiced by Patrick Warburton, the host of Soarin’. He mocks his flight attendant character a few times using similar words and intonations (listen in particular for “comPARTments”).

The base of this droid’s work area is labeled with a stylized 71 to honor WDW’s opening year. 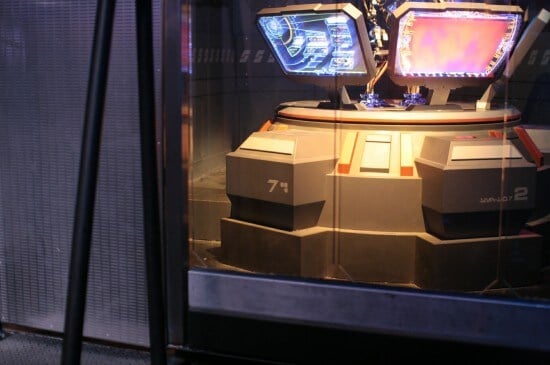 On the ride itself, watch for an Aurebesh version of “Tomorrowland” on an electronic billboard in the Coruscant sequence (the end of which also features Hidden Mickeys along the back wall of the hangar). 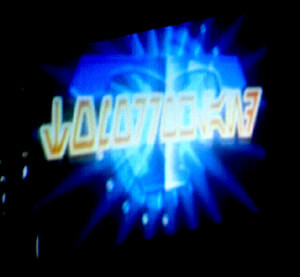 The Death Star sequence includes the Mighty Microscope from Disneyland’s Adventure Thru Inner Space, seen on the left side of the tunnel as we exit the space station. 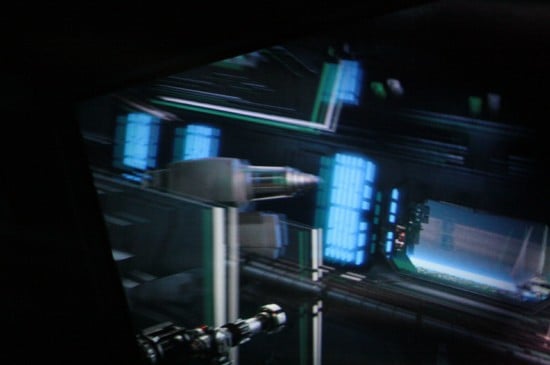 The same sequence ends with cameos by several insiders, including WDI special effects editor Marianne McLean (seen in the Mon Mothma outfit in the center–actually the original costume from the movies) and Imagineering’s show producer Steve Spiegel, grinning widely in an X-Wing flight suit over to one side. There are some extras in the scene, but many others work for Industrial Light and Magic (ILM).

If you like D-Tales, you’ll love Kevin Yee’s Walt Disney World Hidden History (second edition, 2014). This softcover book tracks Disney’s “hidden history” — remnants of former attractions and tributes to Imagineers and other Disney officials — hiding in plain sight in the parks. There are over 300 entries in the book!

Whether tribute or remnant, each item discussed starts with something visible in today’s parks; the idea is that this is something you could visit and see with your own eyes and then appreciate the historical thinking behind it. If you aren’t local, you’ll appreciate that there’s a photo of every item discussed so you’ll know what to look for.

The softcover book has a digital counterpart with the Kindle version, which costs $6.99. (You can also read a Kindle book on PC or Mac even without a Kindle device – the software itself is free.)