When Disney Interactive first released Disney Infinity, fans largely praised the game for offering a chance to simply play with and as many of their favorite characters in fun new ways. Now, as Disney Infinity 2.0 hits store shelves today, the sequel one-ups the original with new content, new characters, new worlds, and vast improvements to just about every gameplay mechanic.

After buying so many figures, exploring so many worlds, and building so many toy boxes, some players experienced Disney Infinity fatigue, having had quite enough of the first game. But in playing the new game, it’s clear Disney Interactive has listened to fans to keep this franchise alive and interesting, reigniting the same excitement that surrounded the original. 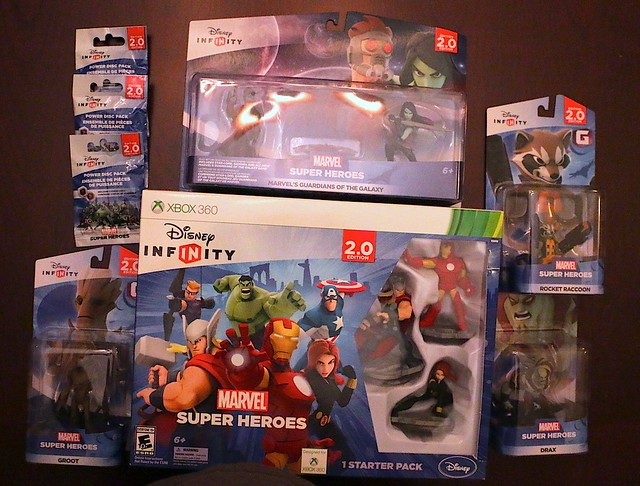 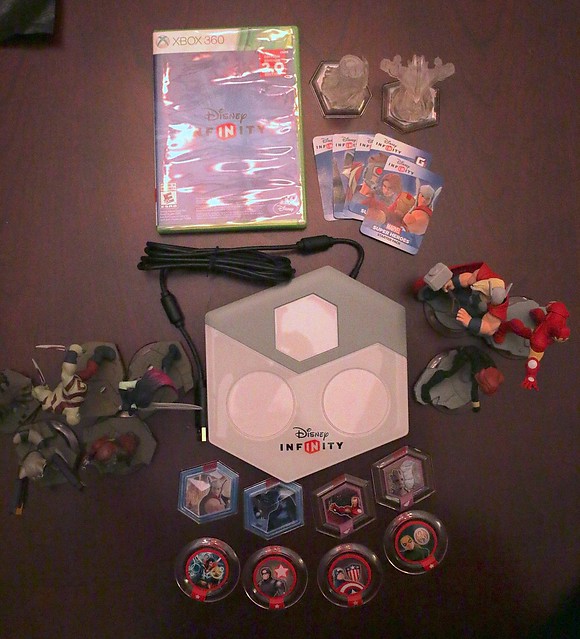 While gamers appreciated the split of play sets and toy box modes in the original, neither completely felt like they reached their full potential. Now in the sequel, toy box mode is more robust – both easier to understand and yet offering far more opportunities to build complex worlds. Play sets are bigger, more detailed, and provide a faster gameplay pace for those who simply want to hack and slash their way through an adventure.

Disney Infinity 2.0 launches exclusively with Marvel characters. It’s an important addition to the game, bringing with it the exciting superheroes and villains seen on the big screen in Marvel’s blockbuster films. Launching into the Avengers play set, after the obligatory tutorial level, players are thrust into a sprawling New York setting, allowing them to endlessly explore. Whether hopping on a motorcycle as Black Widow or flying high as Iron Man or Thor, there’s a feeling of importance and wonder behind every move. 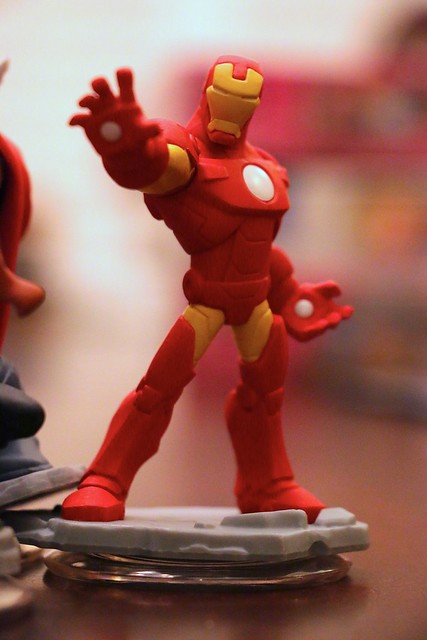 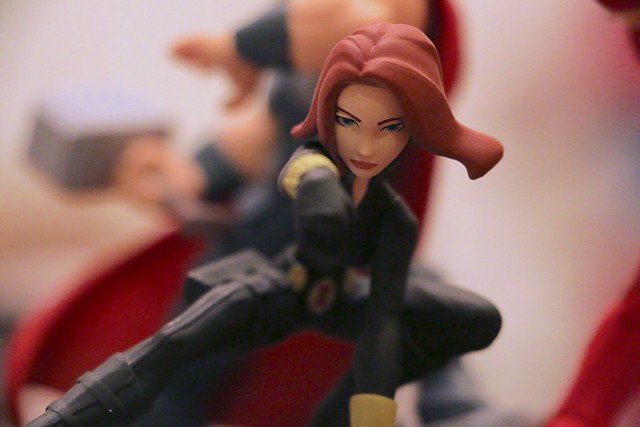 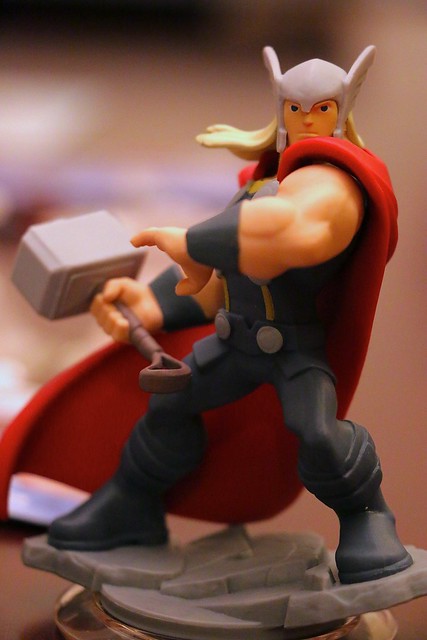 It’s easy to simply have fun in the Avengers world. Though there are plenty of missions to complete to advance the story, running around and leaping between rooftops is a virtual past time unto itself. Flying up to the top of Avengers Tower for the first time is one of those “Awesome, I can do that!” moments. 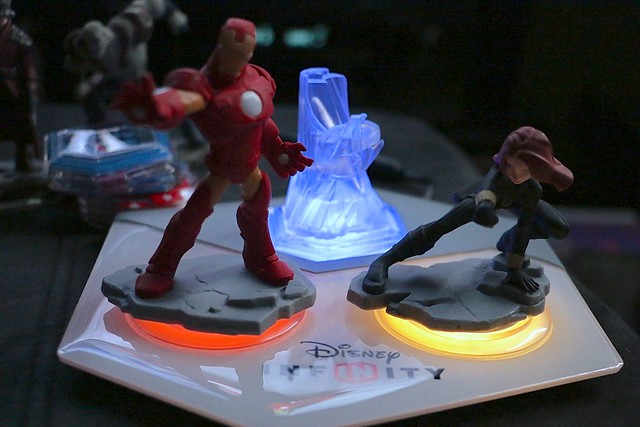 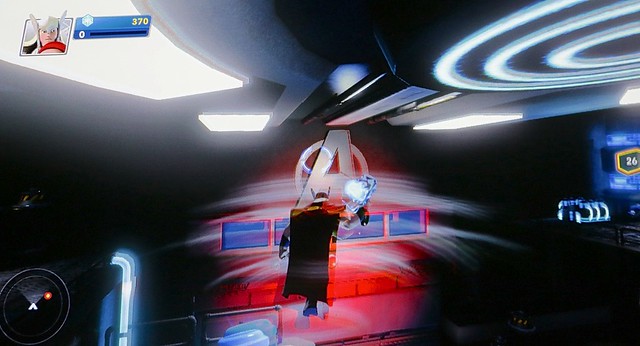 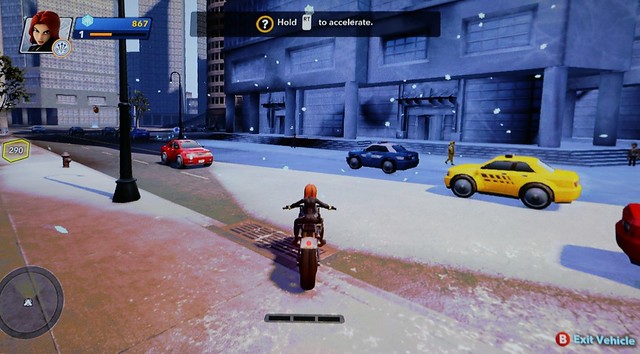 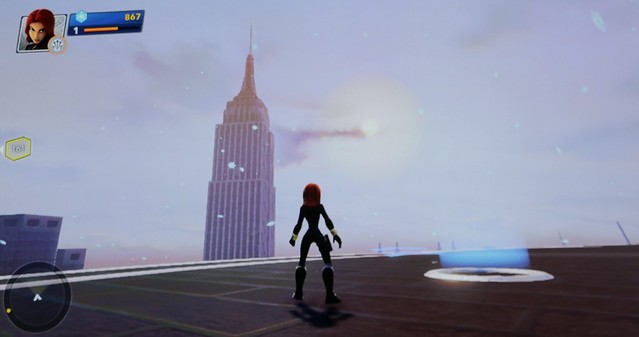 Though the Marvel universe blends well with the Disney Infinity aesthetic, there are some oddities in the transition. While Black Widow and Nick Fury are clearly the Scarlett Johansson and Samuel L. Jackson versions of the characters (completely with sound-alike voices), Iron Man is obviously not the Robert Downey Jr. version, instead a more cartoon-y representation with bright reds and yellows and a higher pitched voice. Likewise, Hulk is not Mark Ruffalo in any way, far more comedic in nature. The combination of the realistic versions of Marvel characters with kid-friendly comic versions is a little jarring.

Fortunately, that split does not extend into the Guardians of the Galaxy play set, which offers a chance to play as all of the stars of the film, represented in an excellent balance between realism and the Disney Infinity look. The figures themselves are great collectibles, made even better when brought to life in the game. It’s flat out fun to blast away as Star Lord and Rocket Raccoon, smash as Drax and Groot, and slice and dice as Gamora. The Guardians play set offers plenty of adventure throughout its missions as well, without getting too repetitive. 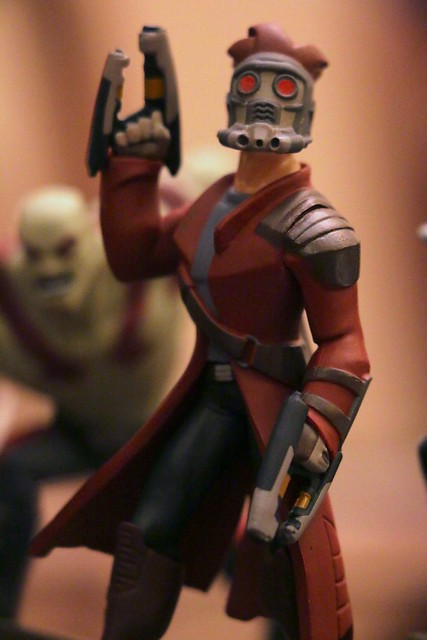 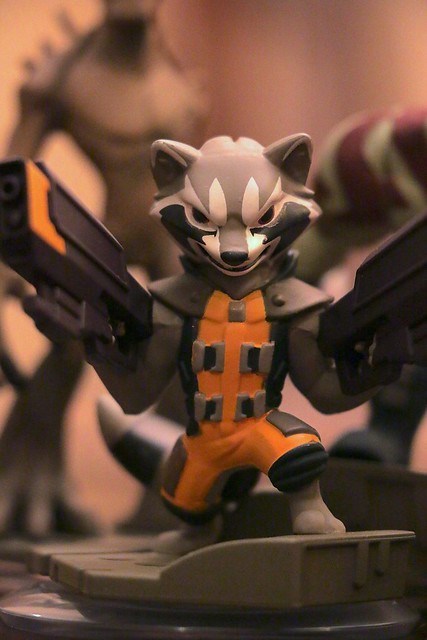 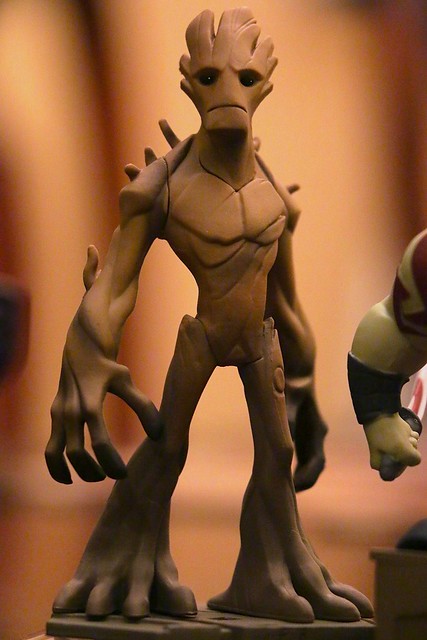 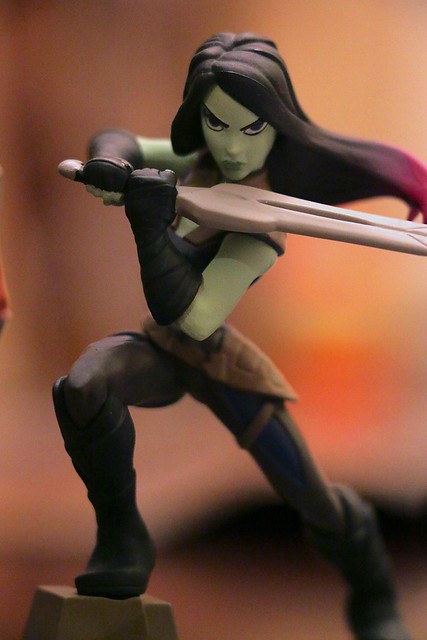 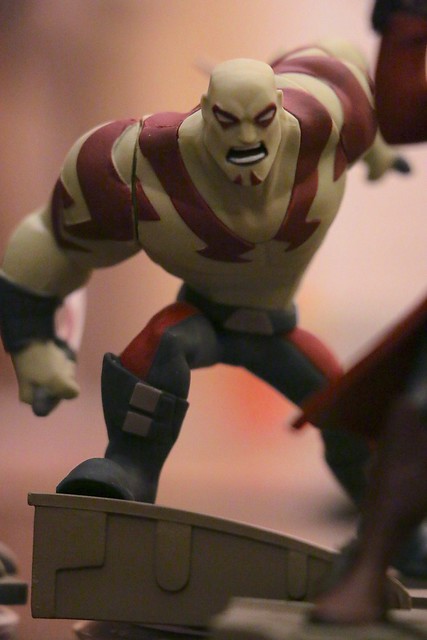 For those who aren’t into the Marvel world, Disney Infinity 2.0 ships with a hint of classic Disney. The introductory sequence allows a chance to play briefly as Aladdin, Merida, Tinker Bell, and Stitch, with appearances by Maleficent, Hiro, Baymax, and other Disney characters from the original game. It’s a tremendous tease that leads into the releases of those new figures in November. Fighting through Agrabah as Aladdin and flying above London as Tink are a particularly satisfying, making it even more disappointing that these characters won’t come with their own play sets. Surely fans will make elaborate toy box worlds for them though.

The toy box mode in Disney Infinity 2.0 has received a tremendous amount of upgrades. Gone are the days of firing it up and having no idea what to do. The new game offers many different paths, each with their own teacher. Gamers can build a pinball machine, dungeon crawler, tower defense, or many other mini games, making them as simple or as elaborate as time and skill allow. It’s a fun moment to step into a game builder and see Quorra there to help amidst a “Tron Legacy” inspired world. 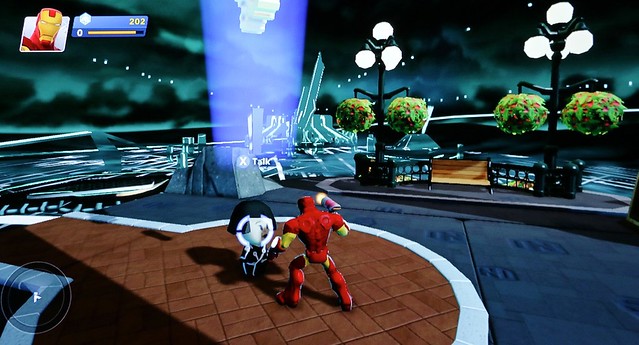 But the most unique addition to the toy box in the new game is the INterior mode. Players are no longer restricted to just building up and out, but can now build inward too. Feeling a bit like “The Sims,” the game offers a chance to craft elaborate winding buildings that can be traversed from room to room inside, decorating every one with furniture, artwork, wall textures, and much more. Naturally, the best decorations have to be unlocked by playing the game a whole lot. But the combination of now being able to build elaborate exteriors and interiors opens up the door to immensely detailed and creative worlds that can be shared online. 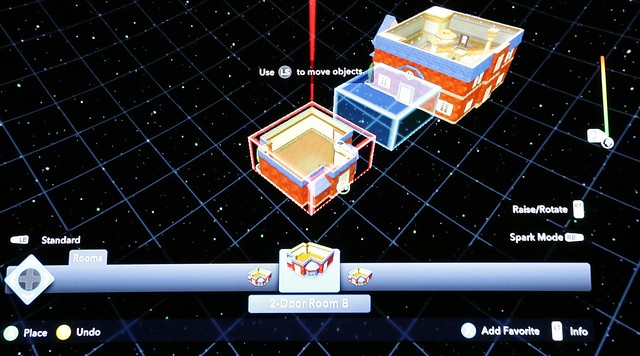 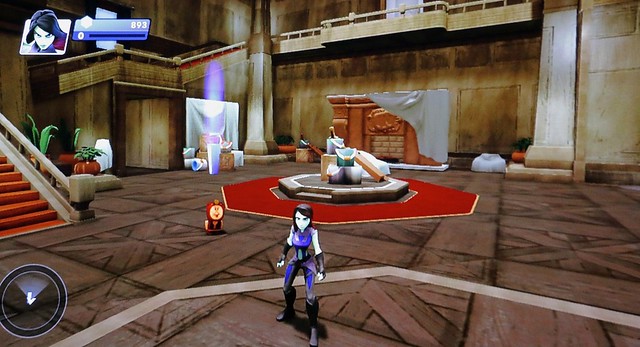 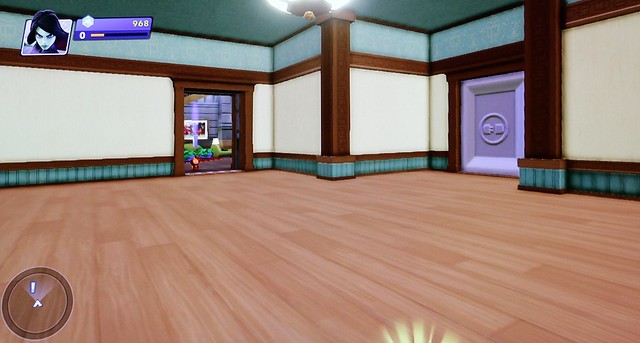 Sharing is a big part of the Disney Infinity community, both with Disney offering their own new creations to download regularly as well as fans uploading their own worlds to be enjoyed. With all the flexibility Disney Infinity 2.0 provides, there’s no doubt gamers will be spending countless hours creating impressive spaces to play around in.

And that’s what it comes down to: play. With all its new additions, Disney Infinity 2.0 offers even more opportunities to just sit down and play a game. It’s possible to dive deep into each of the modes – and that may be tremendously intimidating at first. But those who enjoy that more creative side of gaming will find all the tools they need this time around. However, those who simply want to pick up a controller and blast away at bad guys will equally find ample opportunities to do so across this sequel’s exciting play sets and in the new prefab toy box modes.

The only immediate frustration in the game, at least on the Xbox 360 version that I played, can be found when swapping characters on the base. Though the base instantly acknowledges a new characters been placed on it, it takes at least 10 seconds – sometimes longer – for that character to show up on screen, leaving players to move around an odd swirling mass of energy for a while, unable to actually play. It breaks up the pace, forcing gamers to wait. The first Disney Infinity didn’t seem to take quite this long to load new characters. 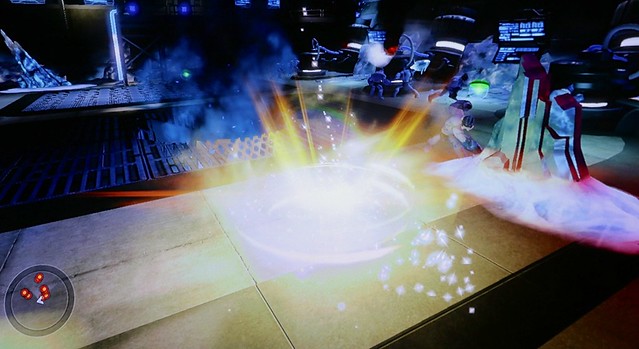 It will easily take hours and hours just to get a first impression of the many modes of this new game. Disney Infinity 2.0 is many games in one, each completely unique from the last. Add to that the Marvel characters and a fun lineup of classic and contemporary Disney characters to come – both as collectible figures and game enhancing power discs – and it seems Disney Interactive has another winner on their hands. 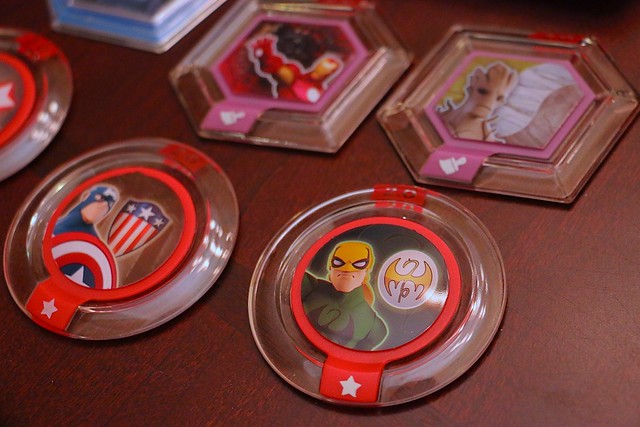 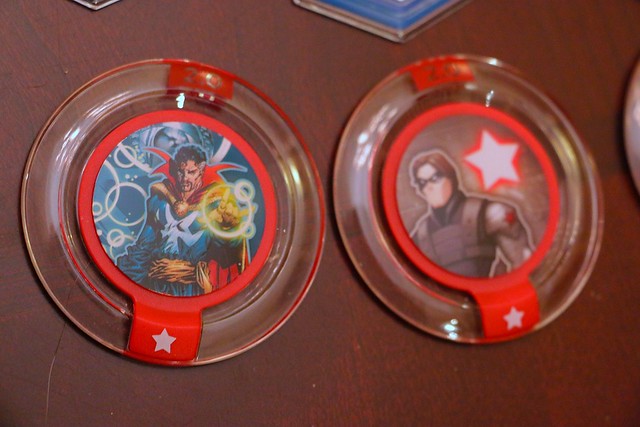 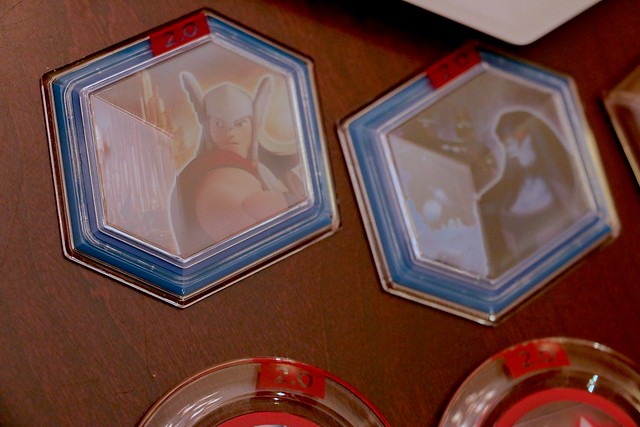