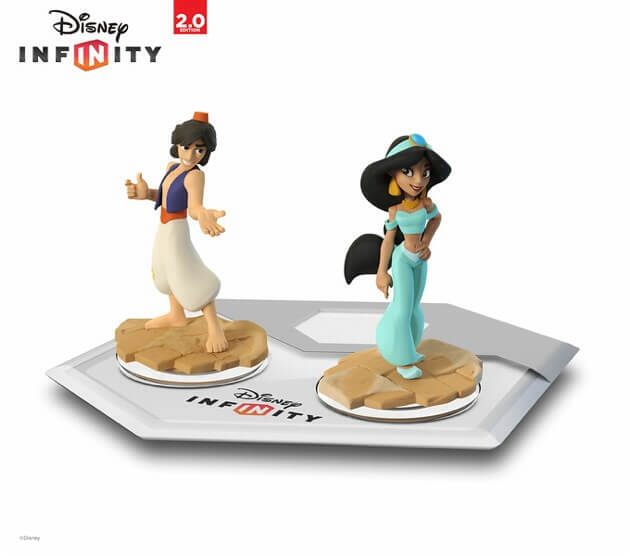 Today, Disney Interactive officially announced that the lovable, street-smart Aladdin and his one true love, Princess Jasmine, will be entering the Disney Infinity Toy Box 2.0. Fans will be able to use these magical characters along with a variety of Disney fan favorites, including the popular Marvel Super Heroes, and hundreds of themed items, locations, props, vehicles and more to create all-new adventures and “whole new worlds” born from the imagination of players. Aladdin: With a scimitar and a magic lamp at his disposal, Aladdin’s brand of action is the answer to all your Disney Infinity Toy Box 2.0 wishes. You’ll want to seek out this diamond in the rough. A proven fan favorite, Aladdin has consistently been one of the most requested characters since Disney Infinity was released last year.

Jasmine: From within the walls of the Sultan’s palace in Agrabah, Princess Jasmine leaps into acrobatic action in Toy Box 2.0. With the help of a magic carpet, Jasmine can summon desert winds to keep enemies at bay.

There will also be Aladdin-themed Power Discs that will enable players to customize their Toy Box experiences. The Power Discs include:

· Jasmine’s Palace View: Transform the Toy Box skyline with this Power Disc and you will feel as if you’re in the land of Agabah.

· The Sands of Agrabah: Transform your Toy Box terrain into the dunes and desert of Agrabah.

· Rags to Riches: Slip on this Prince Ali costume for added style and increased riches. Disney’s Aladdin figure will be available in North American retail stores this fall and Jasmine is scheduled for release in early 2015.