The runaway success of Disney’s “Frozen” continues to astound fans and filmmakers alike. As merchandise flies off the shelves, fetching big bucks on eBay, and lines to meet theme park characters regularly exceed three hours, Disney works hard to develop the next generation of entertainment based on the animated movie giant.

Recently, Disney moved a meet-and-greet with Anna and Elsa from Epcot to the Magic Kingdom. At Princess Fairytale Hall, lines to meet the “Frozen” pair are still long, but guests can utilize FastPass+ to skip the queue and cut the wait time down to a mere minute or two.

FastPass+ reservations to meet Anna and Elsa quickly fill up to 60 days in advance, leaving those without them to brave the wait. However Walt Disney World does have more plans in the works for “Frozen” in the parks, says Imagineer Pam Rawlins, show producer for Princess Fairytale Hall in the recent interview below.

Rawlins notes there are “lots of opportunities for Anna and Elsa all around our theme parks” and advises to “stay tuned to look to see what’s coming up next.” She sees the popularity of the meet-and-greets with Anna and Elsa as something “we can look at as Imagineers and design attractions around them or different experiences.” 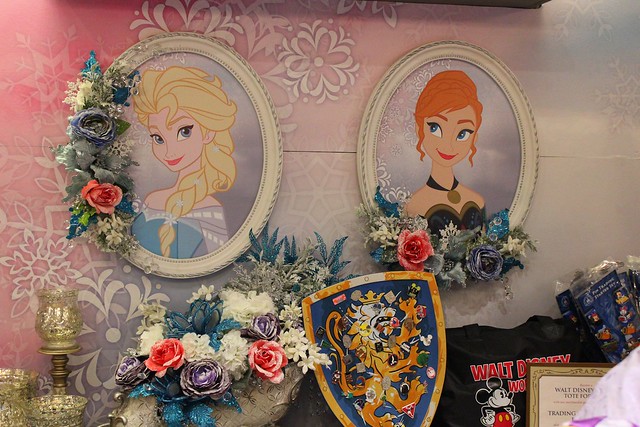 Anna and Elsa will not stay at Princess Fairytale Hall forever, seen there now as “visiting princesses” in the same way that Aurora, Snow White, or any other Disney royalty can come and go inside that attraction.

No specifics were offered, but there certainly is more “Frozen” coming. “That whole movie gave us a franchise, gave us opportunities to see them and we’re always looking at opportunities to expand,” added Rawlins.

Until then, those who don’t make it into Princess Fairytale Hall can still see Anna and Elsa in the daily Festival of Fantasy parade.

Meanwhile Walt Disney World has started using Olaf in their advertisements for their water parks this summer. The world of “Frozen” would certainly be an apt fit for Blizzard Beach, though nothing of the sort has been announced. Anna and Elsa did seem to like the idea when I mentioned it to them recently:

The only place to see Anna and Elsa at Disneyland currently is in their Fantasyland meet-and-greet. No FastPass is available there, so guests must wait in lengthy lines to meet these popular characters. Like at Walt Disney World, wait times to meet them at Disneyland often exceed 3 hours, capping off well before the park closes to allow all guests in line to get through.

Starting this summer, Disneyland will reportedly follow in Walt Disney World’s footsteps by adding Anna and Elsa to the park’s parade. Though not officially announced, it is strongly rumored that a “Frozen” pre-parade will soon take place ahead of Mickey’s Soundsational Parade.

There is already a bit more “Frozen” to see at Disneyland though. An animatronic version of Olaf sits on top of the snowy cottage that houses Anna and Elsa. By day he talks to guests and by night he sleeps. Within Disney, there are talks of a sequel to “Frozen” but only in very lofty terms. It’s a natural conversation to have considering the film has earned more than $1.1 billion worldwide.

Sooner, Disney is developing a stage version of “Frozen” for Broadway. Though Disney CEO Bob Iger has repeatedly noted that they’re not rushing that production either, ensuring it is crafted well rather than quickly. But it is definitely in the works, with some members of the film’s voice cast publicly noting interest in reprising their roles on stage. “Once Upon a Time” viewers were surprised during the final moments of last night’s season finale on ABC as oozing blue goo turned into a female sporting a familiar white braid, clad in blue garments. Yes, it’s Elsa. She proceeded to pull off her glove and shoot ice toward the ground. Many fans are suggesting this version of the snow queen could emerge as a villain on the show. Though Disney is promoting her appearance as being from “Frozen,” they could go back to the original version of the character as written in Hans Christian Anderson’s original fairy tale.

Regardless, it’s sure to attract a whole new audience to the show if it even has a vague connection to the film. “Frozen” merchandise is selling out just as fast as Disney is able to stock it. Whether in theme parks or at mall Disney Store locations, dolls, dresses, and plush Olaf snowmen fly off the shelves.

During a recent press event in California, Disney Store vice president Jon Storey promised more “Frozen” merchandise would soon be arriving to malls across the country. Days later, it did – but it once again became out of stock almost immediately.

Not long after, in response to frustrated customers, Disney Store issued an update on their official blog creating new guidelines and policies for finding and buying “Frozen” products.

Stores will stock “Frozen” merchandise as it is received, with the exception of dolls and plush items, which will be stocked on Saturday mornings. To buy an Elsa costume (limit one), customers will take part in drawings on Saturdays at participating stores. There is also a hard limit of two “Frozen” items per customer for other select products.

Storey also said there are many new “Frozen” items in development now to be released as the Christmas buying season draws closer.

But don’t expect ample “Frozen” items to be available soon. Disney Store plans on getting more of the current product lines in stock some time in July or August.

The future of “Frozen” is bright as Disney continues to capitalize on the hit franchise. There’s no sign of its popularity slowing down, as movie and soundtrack sales are still strong. Reports suggest an October release of a special edition Blu-ray 3D likely containing new bonus features that every “Frozen” fan will want to own, though nothing has been announced.

There’s no doubt that in the weeks, months, and likely years ahead, “Frozen” will move into its place in Disney history as the most successful animated franchise of all time.