Forget “Sleeping Beauty.” Though the 1959 Disney animated film introduced the character that’s now featured in her own live-action movie, “Maleficent” does not exactly retell exactly the same tale. Instead, the new film starring Angelina Jolie in its title role sets its own path, closely and consistently walking alongside the classic Disney storyline but managing to stray at every available opportunity to create its own narrative.

“Maleficent” is not a villain’s film, despite its title. The movie doesn’t even have a clear hero or villain. The character once known for committing acts of evil, including transforming into a menacing fire-breathing dragon, now has a backstory filled with love and happiness, offering a new perspective on the motivations behind her seemingly sinister actions. Yes, Maleficent is now a sympathetic character, for better or for worse.

The film starts off rather weak, a cutesy introduction that’s tough to get through for those seeking the darker side of the menacing villain. Soon thereafter, there is war and a power struggle that finally explains just why Maleficent is so famously offended by not receiving an invitation to Aurora’s christening. From there, audiences are meant to grow fond of Maleficent, feeling bad when she is wronged and laughing along as she frequently uses her mystical powers and surprisingly comedic ways. But as the evil inside her grows, the more conflicted the audience becomes, not sure who exactly to root for in the end.

Is King Stefan the hero for trying to keep his daughter safe or has he gone mad, infatuated with his pursuit of Maleficent? And is Maleficent truly evil or is she justified in her retaliation for past wrongs? Most of all, can these characters be redeemed? These are just a few of the questions this film asks of viewers throughout. 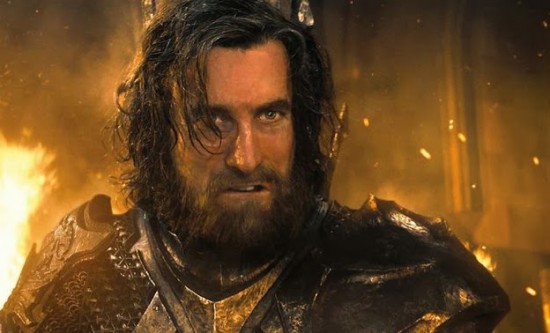 Jolie pulls off the mix between outright evil and subdued mystery, the perfect choice for the role. Though the script can be blamed for a few out-of-character moments, Jolie’s performance always summons the spirit of Maleficent. But Elle Fanning’s Aurora is too flighty while Sharlto Copley reduces King Stefan to an obnoxious whiner rather than a flawed leader, the least impressive of the leads.

Related: Man Behind Viral Sleeping Beauty” Proposal Shares How He Did It

The whole of “Maleficent” is better than its parts. There are definitely dark moments where Maleficent comes across as truly evil. The action is big, gripping, and exciting. The film overall is visually stunning, with many shots deserving of a freeze-frame to fully appreciate their beauty. The falseness that plagued the CG in Disney’s recent “Alice in Wonderland” live-action film is barely present in “Maleficent,” focusing far more on real characters and realistic sets. Seeing it in 3D often adds to the experience, though it does make the film quite dark at times.

But with a runtime of just 97 minutes, “Maleficent” often rushes along, frequently relying on voice-over narration to keep viewers apprised of what has happened in the passage of time off-screen. It plays like a 2-hour movie that unnecessarily left much on the editing room floor, producing a lot of unexplained plot points. It leaves the audience wanting more – but not in a good way.

Fans of Disney’s original will find much familiarity in “Maleficent,” with plenty of nods and references throughout. But there will be as much frustration for those seeking something more faithful, but told from a different perspective. This film is not that, instead frequently changing both key plot points as well as seemingly insignificant details throughout. For example (spoiler-free), the famous fairies that watch over Aurora while she grows up have been inexplicably renamed from Flora, Fauna, and Merryweather to Thistletwit, Knotgrass, and Little. Likewise, Diablo is now Diaval. These and many other alterations to Disney’s classic tale seem to exist for no reason other than to differentiate the two.

Though the new character names are relatively minor changes, other differences are far more major in their impact on how the story unfolds. Aurora is cursed. She spends time in a forest cottage. Prince Phillip arrives. There is a kiss meant to awaken Aurora. And ultimately there is a dragon. But none of these familiar elements play out exactly as one might think. Every major plot point receives a twist – big or small – frequently feeling like the elements were changed simply for the sake of change in an effort to make “Maleficent” feel new. But few of these changes actually improve the story.

There is one scene in “Maleficent” that plays out almost identically to “Sleeping Beauty” – Aurora’s christening – which is a highlight of the entire new film.

“Maleficent” isn’t entirely the film fans of Disney’s villains are hoping for. Those who arrive expecting a dark and foreboding film will be somewhat disappointed. It is rated PG, after all, intended for family audiences. But since its story doesn’t jive at all with the original, the new movie should be viewed on its own merit, forgetting about Disney’s classic animated film and simply enjoying a different take on that story. “Maleficent” is indeed an interesting and entertaining exploration of how the evil of “Sleeping Beauty” came to be, even if that origin story makes this villain a bit less bad.

Want more Maleficent? Here she is appearing at Walt Disney World recently (or, at least, an excellent lookalike):

And a trailer for the film: