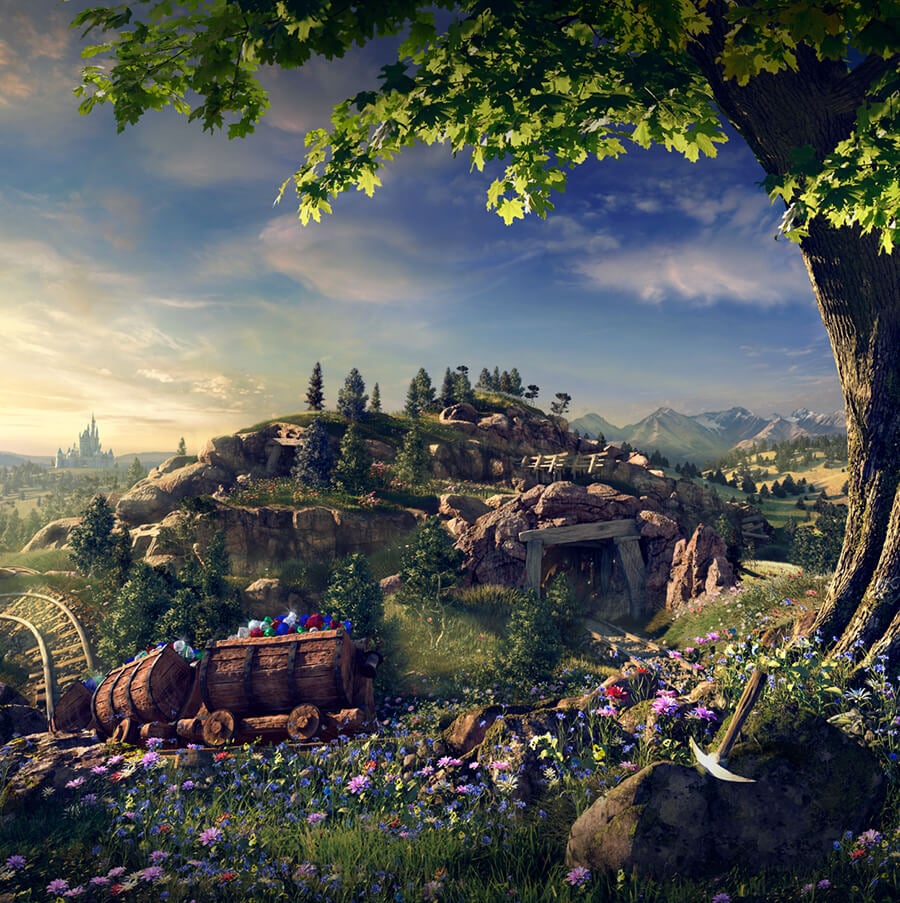 Fresh for 2014, Walt Disney World is offering a first look inside the Seven Dwarfs Mine Train – though a brief one at that. In a new video, Imagineers show off the details they are adding to the unique swinging ride vehicles that will be part of this attraction when it opens in Spring 2014.

But the video also offers glimpses of Snow White’s cottage (still under construction) and inside the mine itself: Related: Behind The Walls Preview: Seven Dwarfs Mine Train To Give A Uniquely Fun Ride With High-tech Surprises At Walt Disney World

Disney has also released a new CG-rendering of the highly-anticipated ride: Their latest description of the Seven Dwarfs Mine Train adds a few more details about the experience as well:

The lovable world of Sleepy, Doc, Grumpy, Bashful, Sneezy, Happy, and Dopey comes to life in spring 2014 when the Seven Dwarfs Mine Train takes New Fantasyland guests on a rollicking, musical ride into the mine “where a million diamonds shine.” Inspired by the 1937 Disney animated film classic “Snow White and the Seven Dwarfs,” the fun starts as guests cross a stone bridge and walk through a beautiful forest with the Dwarfs’ cottage in the distance, leading to the entrance to the attraction — and immersion into the endearing story of the radiant and kindhearted Snow White and her forest friends led by the lovable Dwarfs.

After passing through an interactive pre-show area with fun activities themed to mining, guests will proceed to the mine train. Just like the iconic movie, surprises are in store! The family-style coaster will feature first-of-its-kind ride vehicles mounted in cradle-like pivots that allow the vehicles to swing back and forth during the ride. Adding to the fun, the journey will be accompanied by beloved music from the film classic and there’s a cast of animated figures of Snow White, the Seven Dwarfs, and playful forest critters.