The final piece of the New Fantasyland puzzle will be the highly-anticipated Seven Dwarfs Mine Train roller coaster at Walt Disney World. Not scheduled to open until spring 2014 officially, the ride’s rocky hills and twisted track are already drawing attention at the Magic Kingdom, and today, Disney offered a first look behind the construction walls to reveal some new details.

The Seven Dwarfs Mine Train will fill a void left when Disney closed the classic dark ride, Snow White Scary Adventures, to make Princess Fairytale Hall. But the new experience heightens that slow-moving concept by combining a dark ride with a thrilling roller coaster adventure.

Imagineer Mark Kohl described Guests’ experience at the Seven Dwarfs Mine Train, answering questions on what careful work is going on behind the scenes during construction.

Sneak peek of the Seven Dwarfs Mine Train with Imagineer Mark Kohl
https://www.youtube.com/watch?v=HjtM65RDoVs

The ride will vary in speed, slowing down for elaborate dark ride-style moments, then speed up for higher-speed thrills inside and out. In addition to the namesake mine scene, there will be other dark ride scenes that Imagineers aren’t ready to reveal. However, they do say more characters than just the seven dwarfs will be featured within, with some similarities to the former Fantasyland ride.

When it debuts, the Seven Dwarfs Mine Train will take Guests on a ride into the mine “where a million diamonds shine” and through a rolling countryside past the Dwarfs’ familiar cottage. It will form the centerpiece of New Fantasyland, adding kinetic excitement as an obvious focal point of the area.

Standing a few feet behind the walls, Imagineers described what will ultimately take shape within the current jumble of steel, dirt, and concrete. The Seven Dwarfs Mine Train will be unique in that Guests will walk around all sides of it, seeing different themed elements throughout the different viewpoints. From the front, it will have a wooded and shady entrance leading to the Dwarfs’ cottage, similar to the walkway that heads toward Enchanted Tales with Belle. From the back, it will resemble a seaside village opposite The Little Mermaid, complete with a waterfall.

To entertain Guests while they wait to ride, an interactive queue will feature various activities themed to mining.

But it’s much more than just the ride’s theme that will catch Guests’ attention. The family-style coaster will feature a first-of-its-kind train of ride vehicles mounted in cradle-like pivots that allow the cars to swing back and forth during the ride. It’s a patented Walt Disney Imagineering creation that designers are quite eager for riders to try. Disney likens the thrill level of the Seven Dwarfs Mine Train to somewhere between the Barnstormer and Big Thunder Mountain Railroad. 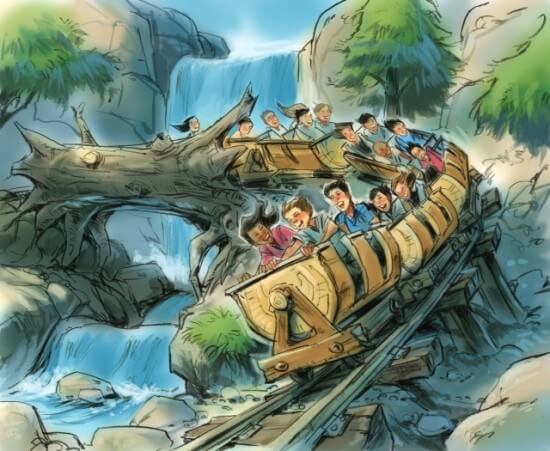 Music from the classic Disney film “Snow White and the Seven Dwarfs” will accompany the ride along with an impressive cast of animated figures of Snow White, the Seven Dwarfs, and forest critters. The Dwarfs themselves will be advanced Audio-Animatronics figures, coming to life in ways never before seen in a Disney theme park.

Imagineers haven’t revealed the entirety of the ride yet, not even discussing a complete ride time, speed, or any other technical details. But they have shown a virtual ride-through of a portion of the ride in the past, seen in the video below.

Video: Virtual ride-through of portions of the Seven Dwarfs Mine Train
https://www.youtube.com/watch?v=ZvF0WO0Dzms

Disney says the slow progress of the Seven Dwarfs Mine Train construction is because they want to take their time to make sure the magic is perfected before they open. And with never-before-used ride vehicles and new high-tech effects inside, this attraction sounds like one worth waiting for.

The Seven Dwarfs Mine Train is set to open at Walt Disney World in spring 2014.