Iron Man Experience announced for Hong Kong Disneyland as Disney's first Marvel ride, to open in 2016 with high-flying thrills - Inside the Magic

The first Disney theme park ride from a Marvel franchise has been announced for Hong Kong Disneyland. It’s called Iron Man Experience, based on the highly successful “Iron Man” series of films to debut in late 2016.

The attraction is a “thrill ride” on an E-ticket scale, also including a gift shop and photo opportunities featuring a meet-and-greet with Iron Man.

As the story unfolds, Tony Stark – Iron Man – has brought his Stark Expo to Tomorrowland, where Guests have the opportunity to see the progression of Tony’s Iron Man suits and many other Stark innovations. The Iron Man Experience itself will have Guests take flight alongside Iron Man, fighting off bad guys (aliens?) throughout the skies and streets of Hong Kong.

The experience won’t be its own themed land, instead located within the existing Tomorrowland. It won’t be a roller coaster, but rather will use next-generation simulator technologies akin to Star Tours, but further advanced. A closer look at the concept art and model reveals a vehicle similar to the Star Tours Starspeeders (which fans are already dubbing “Starkspeeders”) – with a distinctly Iron Man appearance: 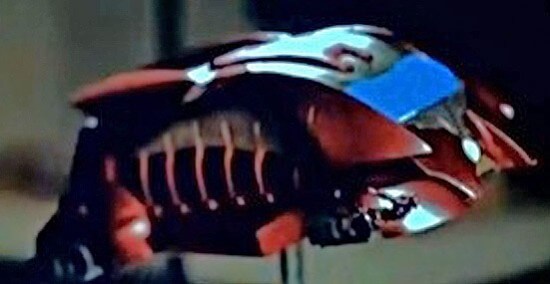 Walt Disney Parks and Resorts chairman Tom Staggs was on hand to announce Hong Kong Disneyland in front of Tony Stark’s famed Hall of Armor, aided by a bit of video including the ride vehicle model above. 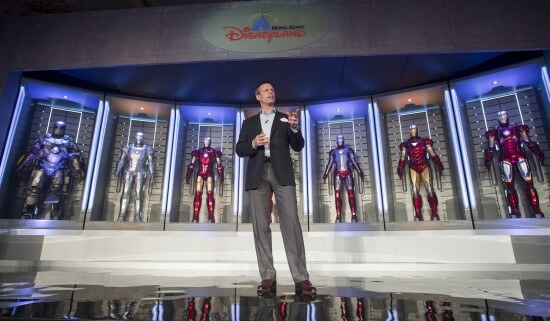 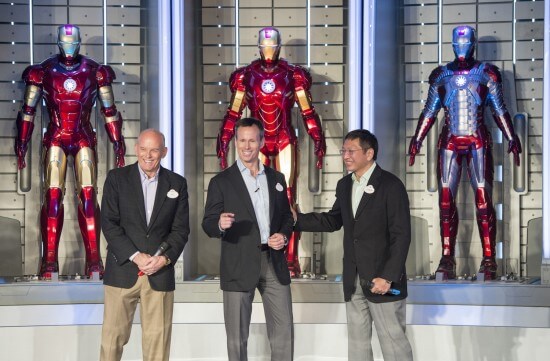 This attraction will feature much more than the Hall of Armor currently on display at the Disneyland Resort in California. In addition to the Hall of Armor, other Stark inventions will be on display as the Stark Expo comes to Tomorrowland, explorable before Guests join Iron Man in a simulated battle in the skies. 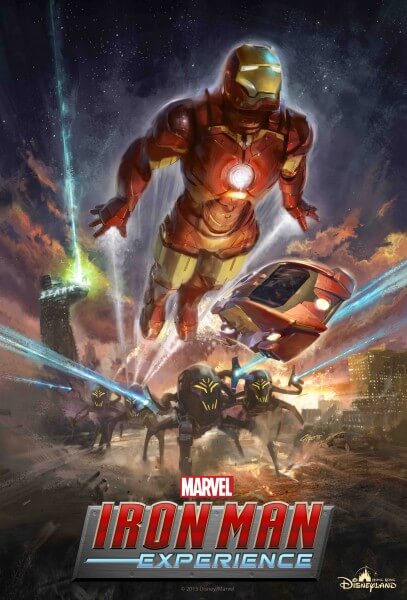 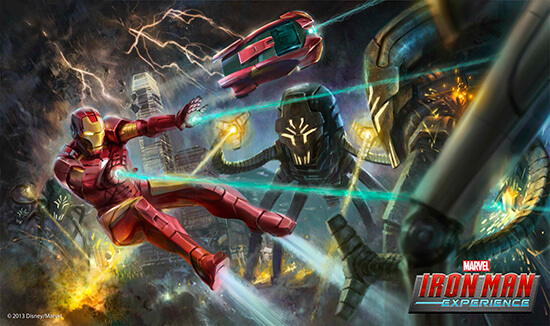 This still from an animatic storyboard gives an idea of what types of visuals will be seen during the ride, including Iron Man flying alongside the ride vehicles: 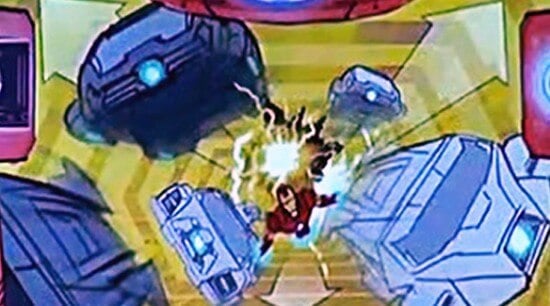 Tom Staggs will share the announcement with the world on the Disney Parks Blog tomorrow. I’ve received an advance copy of his post:

As I’ve often said, one of the greatest things about Disney is the treasure trove of characters and rich stories we have to draw upon for the immersive experiences we provide our guests around the world. With Marvel joining the Disney family in 2009, our character and story base grew even further, and the anticipation for how Marvel comes to life in our parks and resorts continues to energize our guests and Cast.

That’s why it was so exciting earlier today at Hong Kong Disneyland to announce that the very first Disney attraction based on a Marvel character experience will debut in Hong Kong Disneyland. And I’m excited to be able to share some of the initial details with you today about this Iron Man Experience.

Audiences around the world have been captivated by the amazing inventions and innovations of Tony Stark and we’re basing this experience within a piece of the Stark Expo. Located in Tomorrowland at Hong Kong Disneyland, the Expo will allow guests to see firsthand the progression of Tony’s Iron Man suits and many other Stark innovations.

Upon entering the ride vehicle our guests will be able to take flight with Iron Man on an epic adventure that not surprisingly pits Iron Man, and our guests, against the forces of evil. This adventure will take place in the streets and skies of Hong Kong, which will make an even more unique and special experience for our Hong Kong Disneyland guests. In addition, guests will be able to meet and take photos with Iron Man.

It’s obviously no secret that Marvel’s Iron Man movies are immensely popular, and we expect this experience will emulate the success of our most recent expansion – Toy Story Land, Grizzly Gulch and Mystic Point – all of which have been huge hits with our guests.

We are extremely confident in and committed to the continued growth and success of Hong Kong Disneyland. I’m excited to see Iron Man become a part of that success when we welcome guests to the attraction in late 2016.

No further ride details have been released, leaving Disney’s Imagineers with plenty of surprises yet to share, promising a thrilling experience. This announcement follows up on remarks made a bit too early by Hong Kong Financial Secretary John Tsang back in February, pre-announcing an upcoming Marvel attraction.

Click the image below for a closer look at the Iron Man Experience exterior concept art: 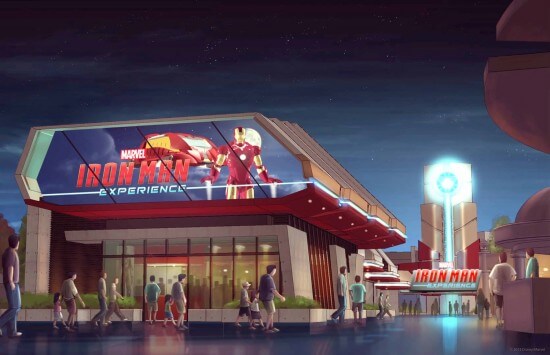