Fear is almost here. Tonight Universal Orlando has revealed the full lineup of haunted houses, scare zones, and shows for Halloween Horror Nights 2013 with the addition of Resident Evil as the final maze.

Returning to eight haunted houses this year, Universal Orlando is featuring five based on outside properties and three original, plus an elaborate street experience straight out of all three seasons of “The Walking Dead.”

On with the full reveal…

The Halloween Horror Nights 2013 map offers up the locations of each of this year’s haunted houses, shows, and open rides scattered throughout the park. 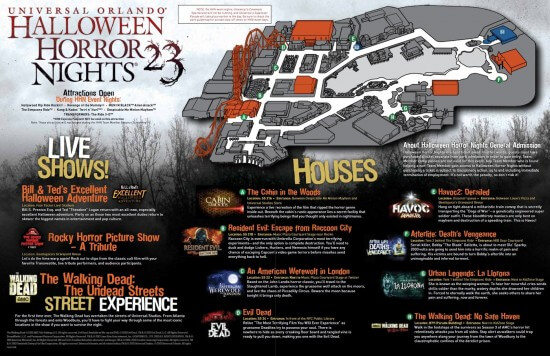 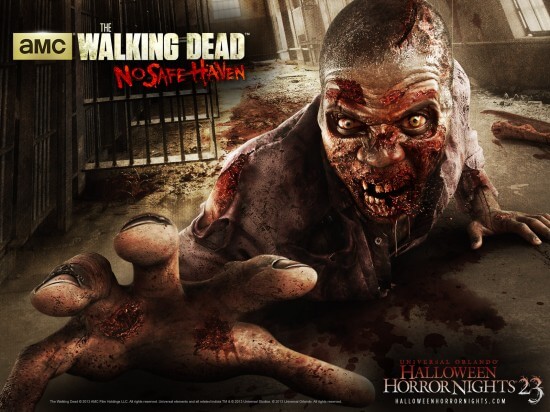 Walk in the footsteps of the survivors as Season 3 of AMC’s horror hit relentlessly attacks you from all sides. Stay alert as walkers could trap you anywhere along your journey from the town of Woodbury to the claustrophobic confines of the derelict prison. 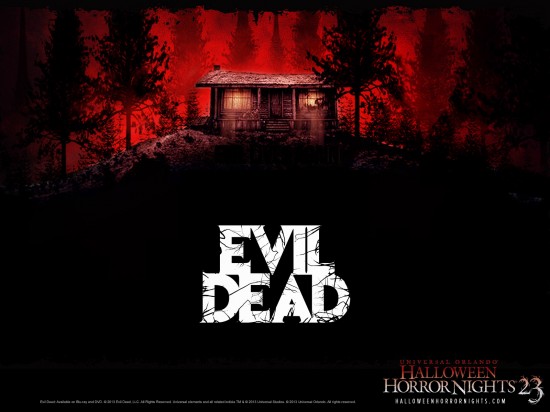 Relive “The Most Terrifying Film You Will Ever Experience” as gruesome Deadites try to possess your soul. There is nowhere to hide as every creaking floor board and tangled vine is ready to pull you down, making you one with the Evil Dead. 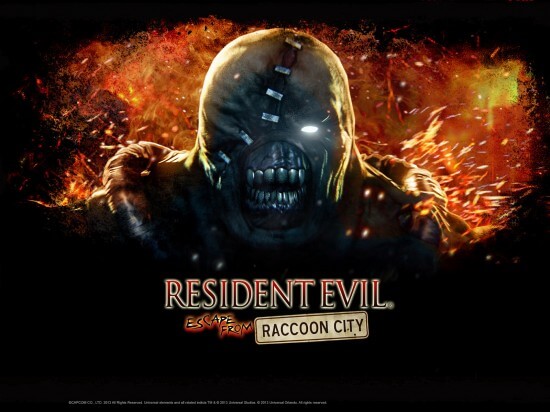 Raccoon City is overrun with Umbrella Corporation’s most terrifying experiments—and the only option is complete destruction. You’ll need to duck and dodge Lickers, Hunters, and Nemesis himself if you have any chance of escaping Capcom’s video game terrors before missiles send everything back to hell.

Cabin in the Woods 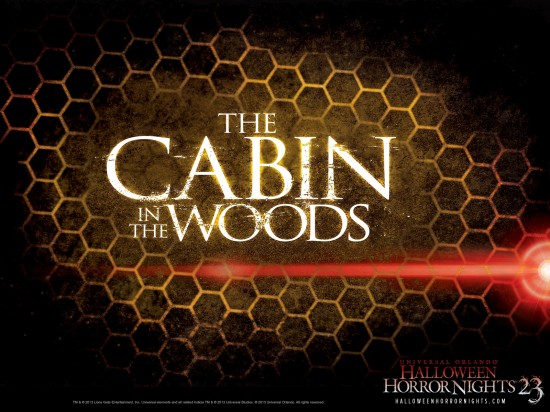 Experience a live recreation of the film that ripped the horror genre inside out. Beneath the cabin’s rustic appearance lies a secret facility that unleashes terrifying beings that you thought only existed in nightmares.

An American Werewolf in London 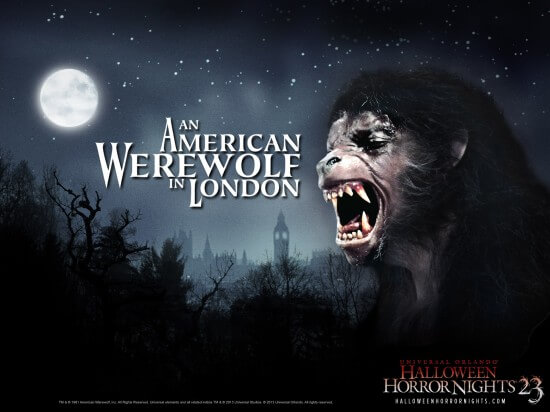 Based on the John Landis horror classic, you’ll travel to the Slaughtered Lamb, experience the gruesome wolf attack on the moors, and live the chaos of Piccadilly Circus. Beware the moon because tonight it brings only death. 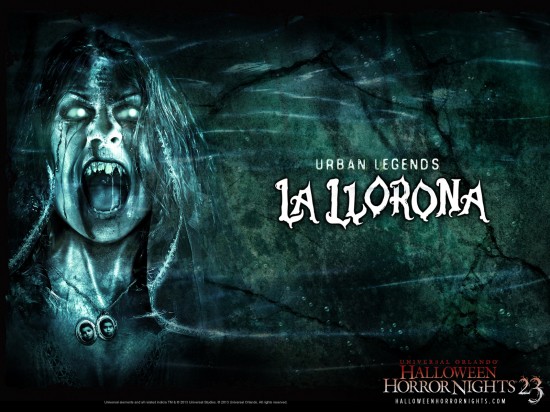 She is known as the weeping woman. To hear her mournful cries sends chills colder than the murky, watery depths she drowned her children in. Forced to eternally walk the earth, she seeks others to share her pain and suffering, now and forever. 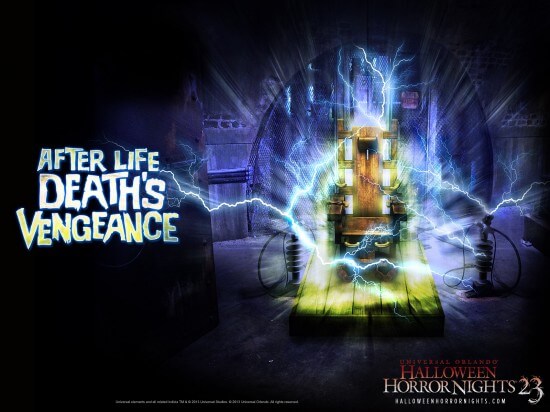 Serial killer, Bobby “The Blade” Galletta, is about to meet Ole’ Sparky. 2000 volts are going to send him into a horrific realm of pain and suffering. His victims are bound to turn Bobby’s afterlife into an unimaginable and infernal torment. 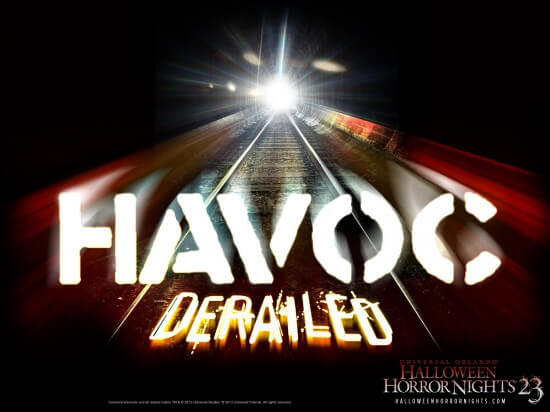 Hang on tight aboard a militaristic train convoy that is secretly transporting the “Dogs of War”—a genetically engineered super soldier outfit. These bloodthirsty maniacs are only bent on mayhem and destruction of a speeding train. This is Havoc! 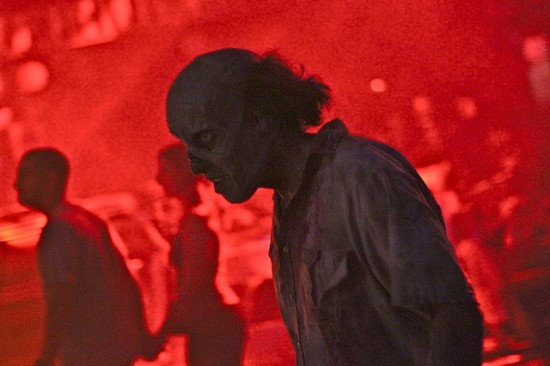 The streets of Halloween Horror Nights 2013 will be taken over by walkers as AMC’s “The Walking Dead” fills the park with recognizable sets from across all three seasons of the show. Unlike last year’s free-roaming “legions of horror,” more permanent scare zones are being set up this year.

The Walking Dead – The Fall of Atlanta
The smell of death is in the air as you make your way past an iconic tank, sandbag barriers, and decayed rotting corpses on your journey through this decimated city. But be warned—the city’s not empty.

The Walking Dead – Clear
Turn around and live—proceed and face your fate. Stick together as you head down this street, because the spiked barriers are there for a reason. If you refuse to heed the spray-painted warnings, you’re in for a terrifying walk that will feel like an eternity.

The Walking Dead – The Farm
Something’s burning and it’s not a Sunday roast. Gasoline fumes ignite your senses as you encounter the smoldering remains of a singed country farm. See and smell the putrid barn, the red tractor, and more as you learn what’s causing that horrifying stench.

The Walking Dead – Woodlands – Central Park area
Tread carefully through these woods, as you never know who you might encounter. Lurking deep in the hidden depths are unforgettable scenes and characters from Seasons 1, 2 and 3.

The Walking Dead – Survivor’s Camp
There’s no one telling ghost stories at this derelict campsite, but there are plenty of undead. Will you dare to go closer to the eerily abandoned RV? Keep your wits about you or you might become a ghost story yourself. 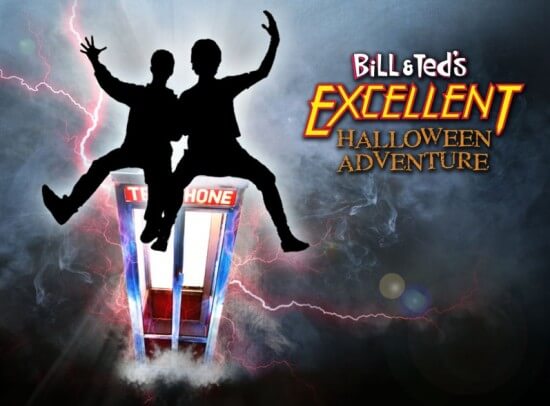 Party on as those two most excellent dudes return with an all new show to skewer the biggest stories of the past year with the biggest names in pop culture. 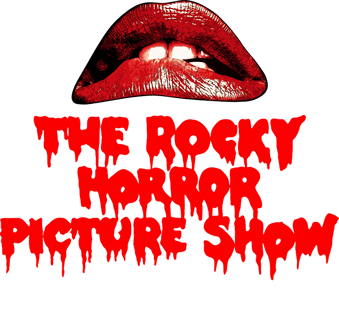 Let’s do the Time Warp again! Rock out to clips from the classic cult film with your favorite Transvestite, live tribute performers, and audience participants.

Transformers: The Ride 3D, Hollywood Rip Ride Rockit, Revenge of the Mummy, Men in Black Alien Attack, Despicable Me Minion Mayhem, The Simpsons Ride, and Shrek 4-D will all be open during Halloween Horror Nights.

Halloween Horror Nights 23 screams in to full gear at Universal Orlando on September 20, 2013.