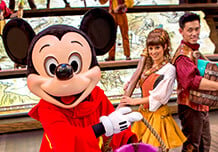 Kicking off the summer season, Limited Time Magic continues with some smaller offerings at Walt Disney World and Disneyland, one promoting the new Mickey and the Magical Map stage show and the other a slightly new variation on an old favorite street show. Celebrate the opening of the all-new live show “Mickey and the Magical Map” at Disneyland Park with a little extra Limited Time Magic! This June, Guests who join Mickey Mouse on this musical journey to imagination and back will be invited to extend their experience, courtesy of Mickey’s Compass Quest. Once the show comes to a close at the Fantasyland Theater, fetch yourself a map and follow a series of show-inspired clues to secret spots around the park. Uncover hidden markers, complete each challenge and take home a special reward! What are you waiting for? The quest awaits!

Also continuing throughout the summer is the addition of the Monsters University Gang to the Pixar Play Parade at Disney California Adventure. Starting in June at Walt Disney World Resort, hop on for a magic ride down memory lane as the Citizens of Main Street U.S.A. get summer hummin’ along in style! The second you walk through the gates at Magic Kingdom park, keep your eyes peeled for a toe-tappin’, parasol-spinnin’ good time—the Citizens have got the red, white and blue spirit after all and they’re ready to pass it along to you! So get in the mood for some good old-fashioned summertime fun and join the Citizens for this unforgettable bit of Limited Time Magic!

Also continuing throughout the summer is the updated version of the Celebrate the Magic projection show on Cinderella Castle.