Move over, Rapunzel. The honor of being named the newest Disney Princess will soon go to Merida from Disney/Pixar’s Academy Award-winning film “Brave.”

Merida will officially become Disney’s 11th princess in a royal coronation, set to take place at Walt Disney World’s Magic Kingdom theme park on Saturday, May 11, 2013. The ceremony will take place at 9:30 a.m. 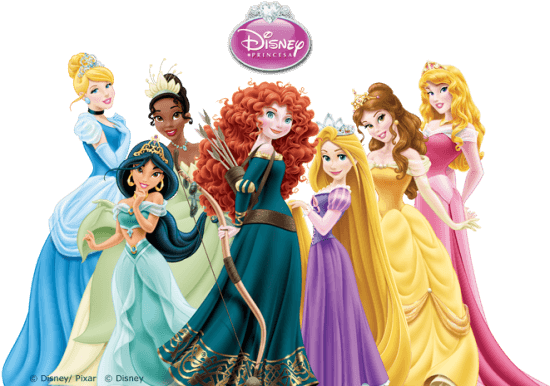 All Magic Kingdom Guests are invited to watch the Disney Princess coronation of Merida on May 11, 2013, at Cinderella Castle. Still, they should be aware that Disney’s own cameras will be recording the event and will likely be blocking off a large area directly in front of the castle.

Click here for a gallery of photos and more videos from the event.

The “Brave” princess is the first to join the line-up from the world of Pixar. However, she is getting an artistic new look on some merchandise to match the new Disney Princess look seen on a broad array of merchandise, as seen here, .

UPDATE: To clarify, a Disney spokesperson has reached out to emphasize that they have “many style guides from which merchandise is made from, so some images of Merida may be in 2D, and some may still be 3D – it all depends on the product and what type of art is most appropriate.” She gave the examples that the 3D rendered version could be used on a backpack, while the 2D imagery seen here might be used on bedding. 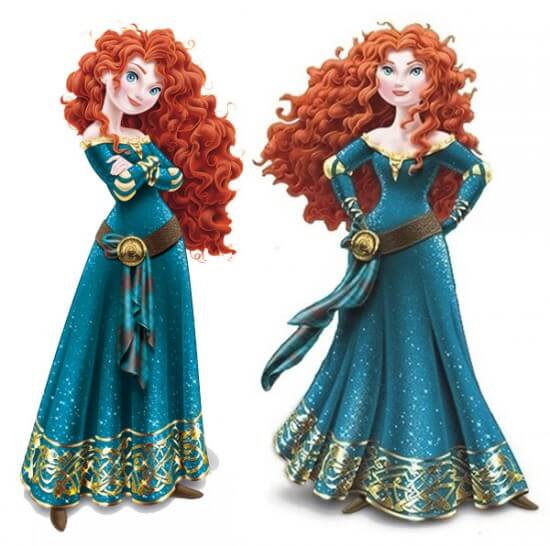 She will be joining existing Disney Princesses Snow White, Mulan, Aurora, Belle, Tiana, Ariel, Cinderella, Jasmine, Pocahontas, and Rapunzel in the line, all of whom are to make an appearance at the coronation.

UPDATE (5/10/13): In a new Q&A, Disney Consumer Products asks “Brave” producer Katherine Sarafian about how Merida fits in with the other Disney Princesses:

A: Merida is an adventurer and a warrior. She fights her battles, advocates for what she believes in and asserts her point of view. She adores her family, her horse Angus and her sport, archery. Merida refuses to let others tell her who she is. These are such relatable qualities for girls today. I love that there is room for all kinds of girls in the royal court, all of which are inspiring role models. Merida is unlike any of the other Disney princesses we’ve seen.

Q: Yes, and not only is Merida unique, she is a modern-day princess who embodies qualities that resonate with moms and daughters today. What do you think it takes to be a princess and why do you think Merida is so relatable?

A: I know a lot of moms and daughters today who share more open communication and still have different points of view. Not every child wants the same future that her parents want for her, much like Merida. How many of us have chosen a different path in life, but still retained our parents’ love and respect? I know I have. Merida shows us that it’s OK to tell the world who we are. That’s a quality that I feel many girls can relate to today.

UPDATE (5/12/13): Merida creator and “Brave” co-director Brenda Chapman sent an email to the Marin Independent Journal, her home county newspaper, blasting Disney for the update to the carefully crafted look she helped create.

The newspaper quotes Chapman as writing:

“There is an irresponsibility to this decision that is appalling for women and young girls. Disney marketing and the powers that be that allow them to do such things should be ashamed of themselves.

“I think it’s atrocious what they have done to Merida When little girls say they like it because it’s more sparkly, that’s all fine and good but, subconsciously, they are soaking in the sexy ‘come hither’ look and the skinny aspect of the new version. It’s horrible! Merida was created to break that mold — to give young girls a better, stronger role model, a more attainable role model, something of substance, not just a pretty face that waits around for romance.

“They have been handed an opportunity on a silver platter to give their consumers something of more substance and quality — THAT WILL STILL SELL — and they have a total disregard for it in the name of their narrow minded view of what will make money. I forget that Disney’s goal is to make money without concern for integrity. Silly me.”

UPDATE (5/15/13): Disney has reached out to officially comment on the controversy, stating the 2D look was intended for “limited” use only and that the website has featured the CG version of Merida since the day it launched – coronation day. More details here. 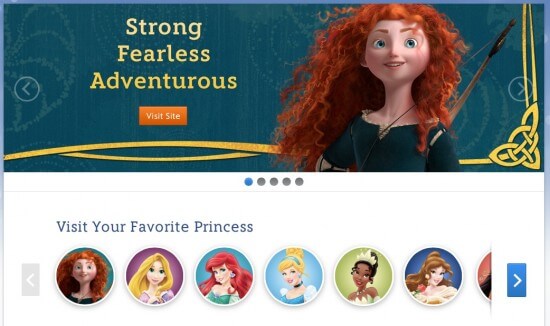 New hairstyles, makeup, and dresses were recently given to the princesses in a modern update to their looks, which are also now reflected at Disney’s theme parks. But from this new artwork, it doesn’t seem that Disney will be changing Merida’s wild signature hairdo.

And here’s Merida alongside the other 10 Disney Princesses for the first time, in an updated version of the above promo image:

The most recent addition to the Disney Princess group was Rapunzel from “Tangled,” whose 2011 coronation took place in the regal setting of Kensington Palace in London, England.

In 2009, Tiana from “The Princess and the Frog” was welcomed for the first time to the Magic Kingdom in a special ceremony in front of Cinderella Castle. However, her coronation took place in 2010 at the historic New York Palace Hotel.

Merida has been meeting and greeting Walt Disney World Guests (along with her three special bear cub friends) since May 2012.