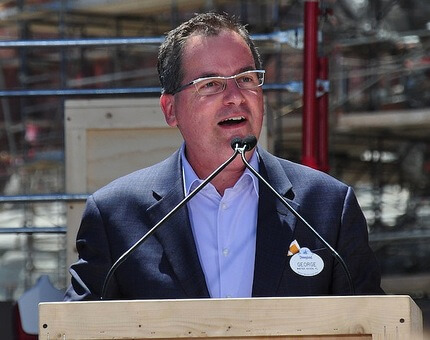 Kalogridis is a Central Florida native. He was born in the Orlando area and attended the University of Central Florida. He worked at Disney’s Contemporary Resort back in 1971 when Walt Disney World first opened and eventually worked his way up the ranks to vice president of Epcot, after which he transitioned across the country to Disneyland, now returning to Florida as head of the entire resort.

During the Cars Land grand opening in June 2012 at the Disney California Adventure theme park, I asked Kalogridis about his transition from Orlando to Anaheim, to which he replied, “Easy. In many respects, other than the humidity, Southern California and Central Florida are very similar.”

Michael Colglazier has been at the helm of Disney’s Animal Kingdom for two years, seen in the video below at the debut of the park’s Wild Africa Trek:

All management changes will be effective February 1, 2013.

Chairman of Walt Disney Parks and Resorts Tom Staggs today announced key leadership changes across one of the world’s leading providers of family travel and leisure experiences to better position the organization for growth. Effective Feb. 1, Meg Crofton will fully assume her global role as president, Walt Disney Parks and Resorts Operations, U.S. and France – a position she has held since July 2011 – while concurrently serving as president of Walt Disney World. With Meg’s transition complete, George A. Kalogridis is named president of the Walt Disney World Resort, and Michael Colglazier is named president of the Disneyland Resort. Both Kalogridis and Colglazier’s roles are also effective Feb. 1.

“With all that we currently have in flight across our resort destinations in the U.S. and France, the time is right to move forward with this leadership transition,” said Staggs. “This group of Disney veterans has the knowledge and expertise needed to continue delivering on our legacy of creating unforgettable experiences that our guests have come to know and expect. I would like to thank Meg for her tireless devotion and the extraordinary contributions serving in both positions, and wish George and Michael the best of luck in their new roles. They both bring a wealth of operational expertise, leadership and passion to these roles, which will contribute to the success of Walt Disney Parks and Resorts.”

With the appointment of a Walt Disney World president, Crofton will focus all of her attention to providing strategic oversight of the broader initiatives that impact Disney destinations in the U.S. and France.

Kalogridis brings a tremendous amount of knowledge and expertise to his new role at Walt Disney World, including more than 40 years of experience at Disney parks in a number of positions around the world. Most recently as president of the Disneyland Resort, he oversaw one of the most extensive expansion projects in the Resort’s history — including the immensely successful transformation of Disney California Adventure. Throughout his career, Kalogridis also has proven himself to be a leader in the travel and leisure industry, as well as a respected partner in the community.

For the last several years, Colglazier has served as head of Disney’s Animal Kingdom where he has been instrumental in the planning and development of an Avatar-themed land. He brings more than two decades of wide-ranging experience to his new role at the Disneyland Resort, including leadership positions in Operations, Global Development, Operations Strategy and Technology and Strategic Planning.

The company also announced several other corresponding changes. As part of the organization’s approach to providing new opportunities and challenges to leaders, each of these transitions is designed to give seasoned executives the opportunity to broaden their knowledge of the segment’s diverse businesses and operations around the world.

Claire Bilby will relocate to Paris as senior vice president, Sales and Marketing Disneyland Paris and Europe, reporting to Leslie Ferraro, executive vice president of Global Marketing and Sales and Philippe Gas, CEO of Euro Disney S.A.S. Bilby has held a variety of executive positions around the world, including several in sales and marketing, and most recently she has been instrumental in leading the Disney Vacation Club business, making it a priority to deliver an exceptional experience to the more than 175,000 Member families.

As a result of Bilby’s new position, Ken Potrock has been named senior vice president and general manager, Disney Vacation Club and Adventures by Disney, reporting to Karl Holz, president of New Vacation Operations and Disney Cruise Line. Throughout his Disney career, Potrock has been a leader in a wide array of Parks and Resorts businesses, and has become known as a creative catalyst with deep experience in marketing and operations. Most recently leading both the sports and Downtown Disney organizations, his leadership abilities have been apparent with the sports business and the unprecedented growth of the Walt Disney World Marathon Weekend.