Though One More Disney Day began relatively slowly at the Magic Kingdom at Walt Disney World, the 24 park hours that followed the morning’s welcome ceremony on Feb. 29, 2012 proved to be an unforgettable and unique experience for the thousands who attended.

As much as I would have liked to have stayed in the park for the full 24 hours, Leap Day fell on a weekday and thus I had to leave to attend to normal, everyday matters. I left the Magic Kingdom at around 7:30 a.m., returning just after midnight. And I didn’t miss much while gone. The daytime hours of One More Disney Day were nothing more than a typical day at the park. Guests rode rides, saw shows, and met with characters. But as the day turned to night and locals left work, a seemingly normal day in February turned extraordinary.

After dark, crowds began pouring into the park, with a long line of cars leading to the Magic Kingdom parking lot: 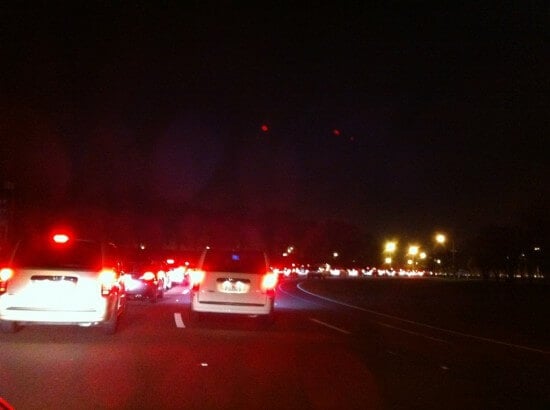 Despite some complaints of heavy crowds in the early to late evening, lines for most attractions in the late night hours after midnight were bearable, certainly busier than most nights, but nowhere near the massive turnout that showed up to Disneyland Park in California, which was also celebrating One More Disney Day. That park reached capacity early in the evening, no longer admitting guests, producing 60+ minute waits just to enter the park. One unofficial report suggests record numbers of guests visiting Disneyland that day at numbers approaching 90,000 visitors.

Disney does not officially comment on attendance and as such Disneyland spokeswoman Erin Glover could only offer a general comment about the evening, telling me, “Since Leap Year added one day to the year, One More Disney Day was a 24-hour celebration, not just the extension of a regular day. This concept obviously resonated with our guests and many of them chose to celebrate the additional day at Disneyland.” Many indeed!

But back out here at Walt Disney World, throughout the late-night hours, the Magic Kingdom was filled with smiling faces, enjoying both the park’s regular attractions as well as the added entertainment.

When I asked for a comment about if One More Disney Day was seen as a successful promotion and event, Walt Disney World spokeswoman Andrea Finger said, “We are pleased that our Guests enjoyed their extra time by celebrating Leap Day with us, creating memories with families and friends that will last a lifetime.”

So let’s jump back to two nights ago, Feb. 29, 2012, and take a look at some of those magical memories that were created…

One More Disney Day ended without a bang. There was no park-wide announcement, no countdown. 6 o’clock came and went quietly as guests slowly trickled out, many dragging their feet from a long but exciting day. But it was the satisfaction of being there for the special event that resounded among those who stayed until the end. And though I only witnessed the beginning and concluding hours of One More Disney Day, it was still a special experience for me.

The atmosphere and energy that filled the air throughout those late-night hours was unlike no regular day in the park, with even park regulars and locals excited to be there, as if it was their first time. Though the Magic Kingdom is often open as early as 7 a.m. and as late as 3 a.m. for Extra Magic Hours, there was something special in the air for this One More Disney Day, with many hoping Disney would do it again soon – or at least sooner than the next Leap Year in four years.

Though Disney isn’t saying whether the promotion was a success for them, judging by the long lines for food, thousands of special T-shirts purchased, and abundance of annual passholders and off-duty Cast Members who showed up and spent money in the park, it was likely a profitable event. And, more importantly, One More Disney Day fueled buzz across the Internet and served as one of those magical moments (even including a marriage proposal or two) that truly will be something for Disney fans to remember for years to come.

More photos from One More Disney Day at the Magic Kingdom: