This year’s lead-up to Halloween Horror Nights 2011 began somewhat innocently with a creepy playing card arriving in the mail, containing a cautionary message. Then came a somewhat more sinister delivery in the form of a second card with a single blood drop and a few scratches. Today Universal Orlando has upped the stakes for this 21st year of the Halloween event with a new deadly message. 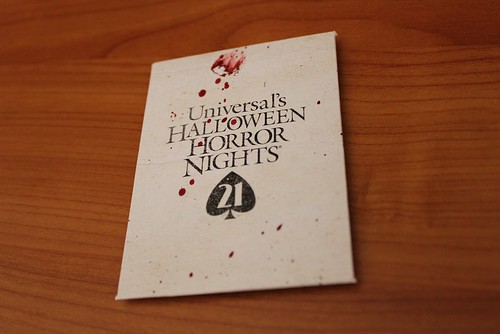 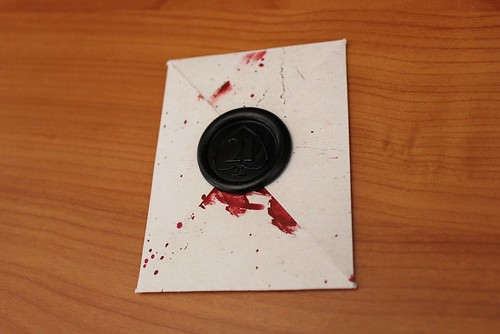 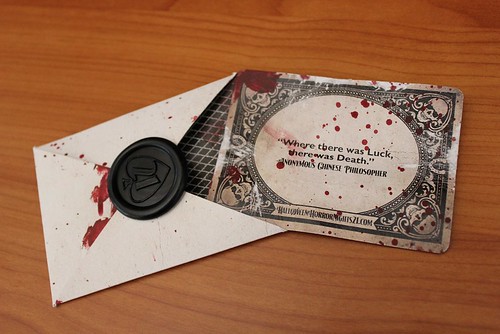 “Where there was Luck, there was Death.” – Anonymous Chinese Philospher 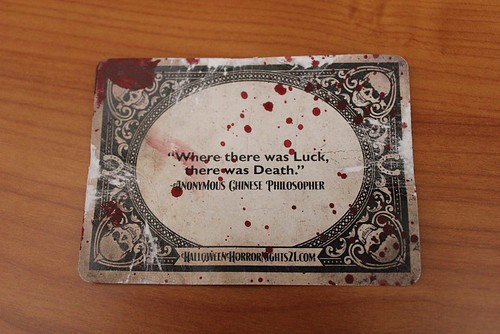 The previous card mentioned that luck will be seeking people out. And now, it appears that luck will run out for those whom it/he/she seeks, if the spattered blood and further scratched card is any indication of what’s in store. 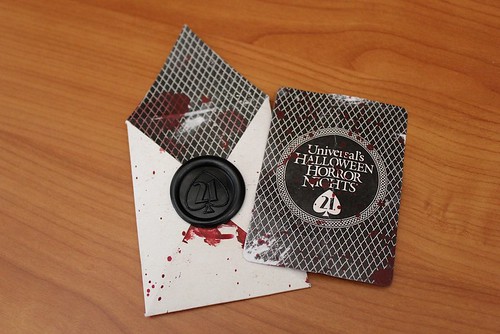 In our last mailing update, a request was made that we show the scale of these cards, so I have included a quarter as a frame of reference in the photo below. 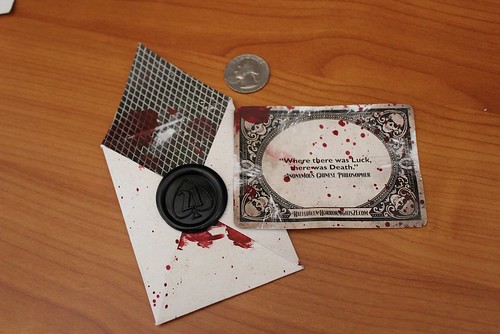 Universal has promised weekly mailings through September 1, at which point it’s likely they will reveal the entirety of what haunted houses, scare zones, and shows await attendees at Halloween Horror Nights 21 when it begins on September 23. While those specifics are thus far mostly unknown, the games of chance available in the Orlando section of HalloweenHorrorNights.com do seem to hint at what’s to come, with some houses themed around steampunk, pirates, demons and runes, classic horror, a graveyard, and a few other general topics.

We’re likely to see these mailings get a bit crazier in the coming weeks. On their Facebook page, Universal Orlando recently posted, “And you think you’re just waiting for cards. As fate would have it… there’s more… much more to come to those fortunate enough to be the first 21 each week…” In addition to press (like us) receiving these cards, this year Universal is also sending these teasers to 21 lucky fans each week who respond to their Twitter and Facebook posts the quickest, so monitor their pages, particularly on Mondays, to have a chance to get your own.

And check back here throughout the coming weeks and particularly on September 1 for all the latest details about Halloween Horror Nights 21 at Universal Orlando.