In the latest Star Tours 2 update from Walt Disney Imagineer Tom Fitzgerald, Disney is having a little fun with fans by featuring a Star Tours company flight list in the Aurebesh language, common to the Star Wars universe.

While Disney has not yet released the official list of all the destinations guests will visit when Star Tours: The Adventures Continue opens on May 20, 2011 at Disney’s Hollywood Studios (and later at Disneyland on June 3), this departure list does offer a couple new possibilities. It’s previously been revealed that Tatooine and Coruscant will be part of the updated ride, but Endor may be added to that list as well.

Take a look at the full departure list graphic Disney has unveiled: 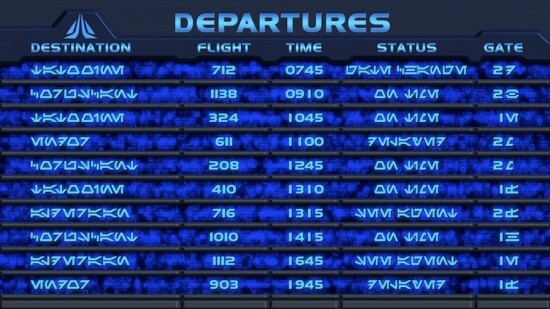 In the left column, the first, third and sixth locations read “Tatooine.” The second, fifth and eighth read “Coruscant.” The seventh and ninth are “Alderaan.” And finally, forth and tenth read “Endor.”

The graphic above also contains an in-joke about Alderaan, with its flight status listed as “See Agent.” With Star Tours 2 taking place before Alderaan is blown up in Episode IV, perhaps the Star Tours company is concerned for the well being of the planet with Darth Vader building the Death Star. It wouldn’t be good business for passengers to hear that “millions of voices suddenly cried out in terror.”

Of course, Endor was always supposed to be the destination for the original Star Tours attraction, though guests never quite made it there due to the “creative” flying of Captain Rex. Hopefully the attraction’s new pilot, C-3PO, will do a better job of reaching the proper destinations.

Fitzgerald promises more details will be revealed soon about where the Starspeeder 1000 will take guests when Star Tours: The Adventures Continue opens.