When the ride sequel opens at Disney’s Hollywood Studios on May 20, 2011, guests will virtually visit a variety of Star Wars locations and characters. The image above appears to depict the planet of Geonosis, as seen in Star Wars Episode II: Attack of the Clones.

Here’s another look at the planet from The Star Wars Wiki: 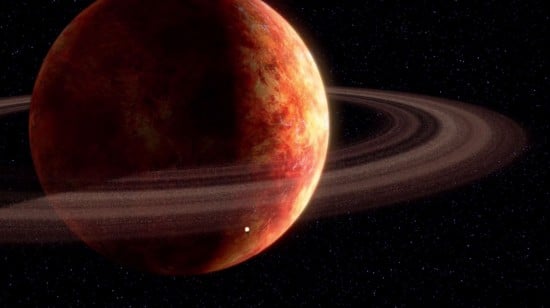 It’s possible the red planet is another of many in the Star Wars universe but the resemblance to Geonosis is close.

Also seen in the background of the image is a half-constructed Death Star. Given the ride’s new timeframe taking place between the two Star Wars trilogies, it can only be assumed that this is the first Death Star being built (as seen completed in Star Wars Episode IV: A New Hope). Here’s a closer look at the new image from Star Tours 2 (Click to enlarge):

The new artwork was revealed in an e-mail sent today to Walt Disney World Annual Passholders in promotion of the attraction (re)opening in May. Star Tours: The Adventures Continue will also open at Disneyland in California, but not until June 3, 2011.