A week ago, Disney unveiled changes to its Fantasyland expansion plans, replacing Princess meet-and-greet cottages with the new Seven Dwarfs Mine Train. Being referred to as New Fantasyland will feature a roller coaster diving in and out of colorfully lit mines filled with animated characters from the film Snow White and the Seven Dwarfs.

At the time, Disney only offered artwork depicting what the attraction will look like on its outside. Since then, an inside look at one of the animated mine scenes was revealed on construction walls behind Dumbo in the Magic Kingdom: 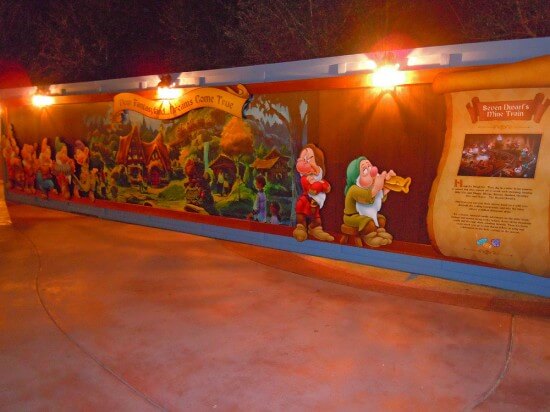 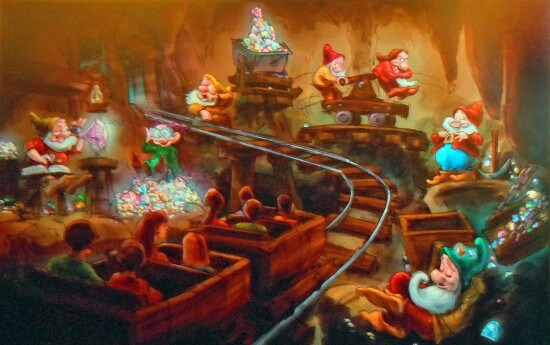 And a wider shot including the text below the concept art: 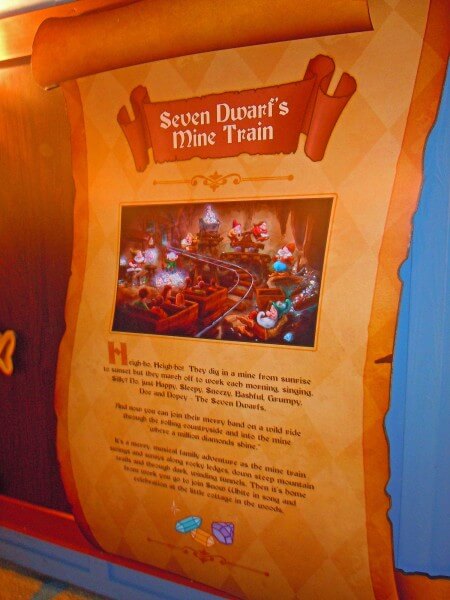 “Heigh-ho, Heigh-ho! They dig in a mine from sunrise to sunset, but they march off to work each morning, singing. Silly? No, just Happy, Sleepy, Sneezy, Bashful, Grumpy, Doc, and Dopey – The Seven Dwarfs.

And now you can join their merry band on a wild ride through the rolling countryside and into the mine ‘where a million diamonds shine.’

It’s a merry, musical family adventure as the mine rain swings and sways along rocky ledges, down steep mountain trails, and through the dark, winding tunnels. Then it’s home from work you go to join Snow White in song and celebration at the little cottage in the woods.”

The Seven Dwarfs Mine Train will open as part of the New Fantasyland, which will premiere in phases in 2012.

Click here for all the latest details of the Fantasyland expansion.