Each year Disney celebrates the holiday season with a special event at the Magic Kingdom called Mickey’s Very Merry Christmas Party. The after-hours event adds even more character to the fantasy-filled theme park, bringing the Christmas spirit to life by way of lighting, music, fireworks, a parade, and plenty of Disney characters mixed in.

So take a photo journey with me around the Magic Kingdom for a sampling of the holiday cheer brought to the park this time of year: 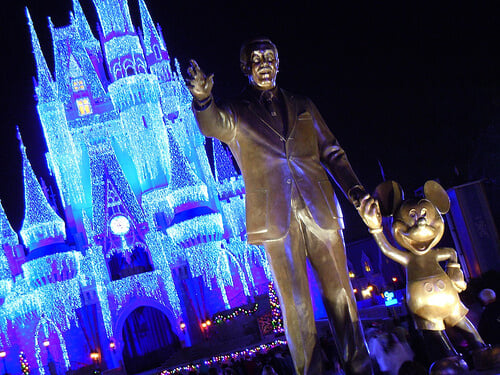 We begin with the most famous Disney character of all: Walt Disney. While it’s often said that “it all started with a mouse” (Mickey, of course), it was Walt that truly created what we know today as Disney magic. Though he was a real person, he has since reached character-like status with this famous Partners statue, holding hands with the Very Merry Christmas Party’s host, Mickey. They stand majestically in front of the sparkling Cinderella Castle during the holiday season. 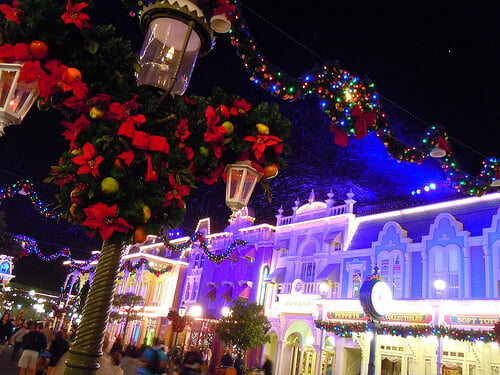 But the most-viewed character in all of Mickey’s Very Merry Christmas Party is not a person or a talking animal, but rather a street: Main Street USA. During the party, it takes on a life of its own, with garland strung across the road, colorful lighting present along its walls, upbeat music echoing, and even an occasional magical snow flurry overhead. 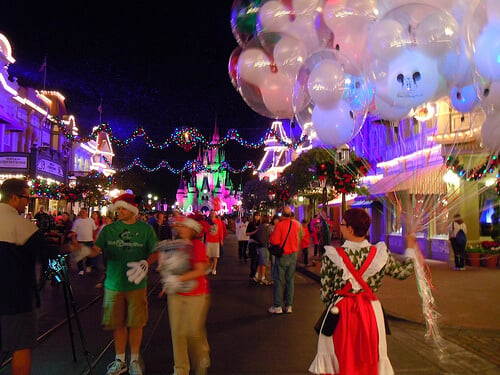 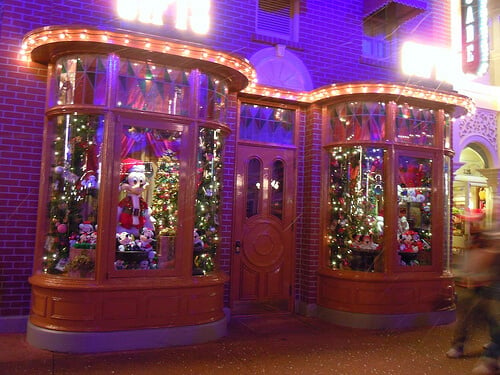 The shop windows on Main Street USA are decorated for the Christmas season, featuring a few familiar faces of their own… 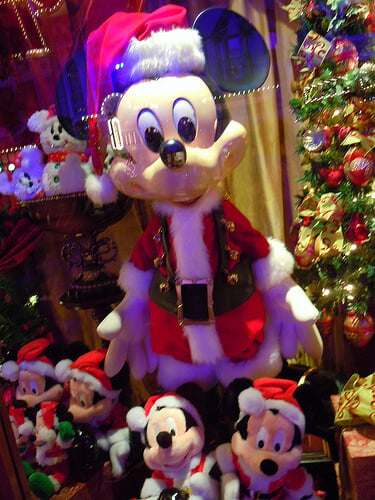 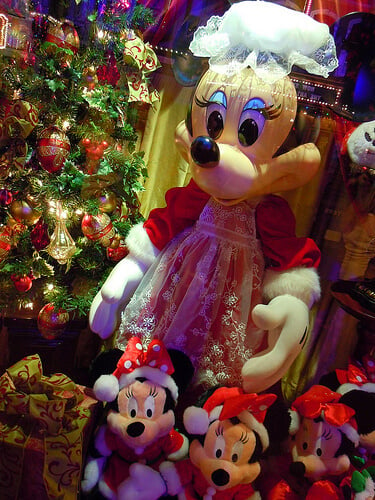 …and his buddy Minnie. 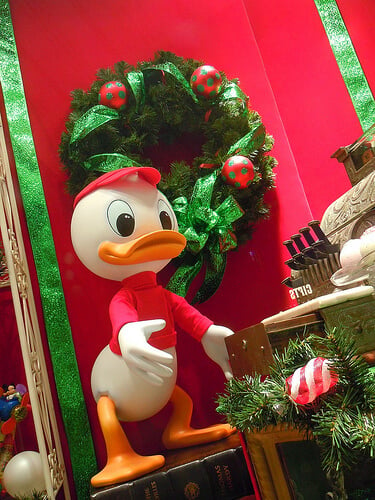 On the other side of Main Street, we find the famous quackarific trio, Huey… 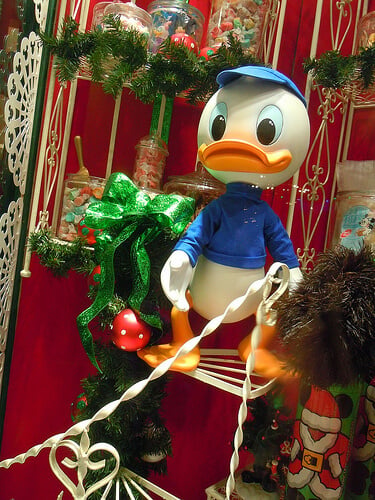 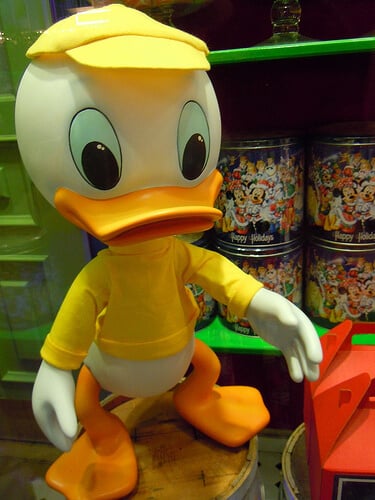 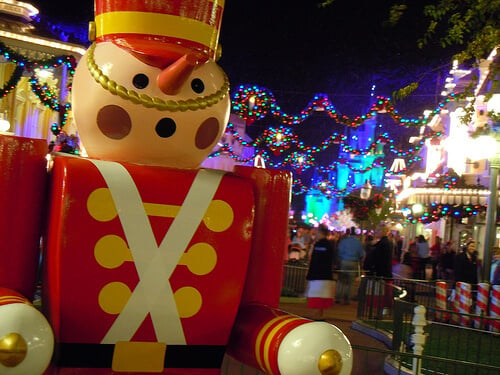 Back in Town Square, guests entering the park are greeted by larger-than-life toy soldiers. 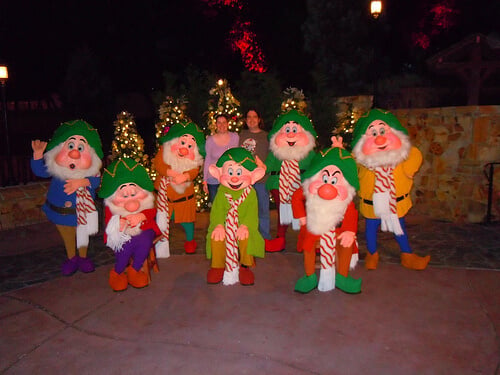 During Mickey’s Very Merry Christmas Party, Fantasyland is home to one of the most amazing meet-and-greet photo opportunities Disney ever assembles: all seven dwarves. Yep, all of them, all at once. There’s (left to right) Sneezy, Bashful, Sleepy, Dopey, Happy, Grumpy, and Doc. And in the middle are myself and my wife Michelle. The dwarves always have a long line to meet them, but photos like this are worth waiting for. 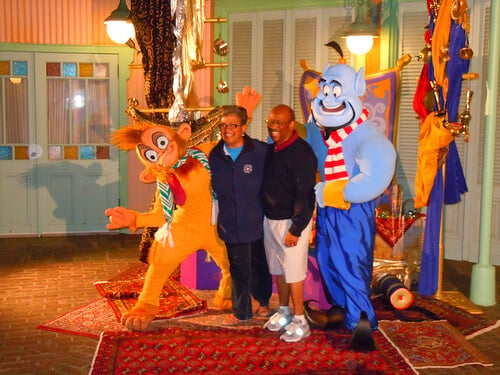 Adventureland offers up the Genie and Abu from Aladdin. While I’ve seen the Genie take pictures with guests occasionally, this party is the first time I think I’ve ever seen Abu available for a picture. 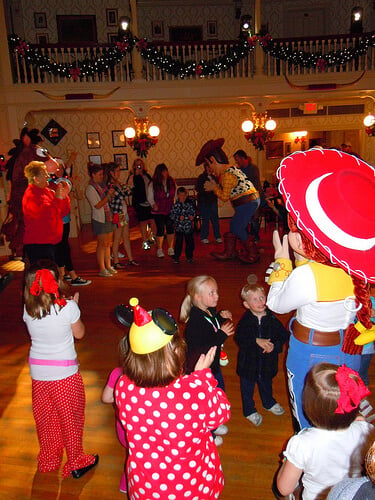 Over in Frontierland, Woody and Jessie from the Toy Story series host a rootin’ tootin’ dance party. 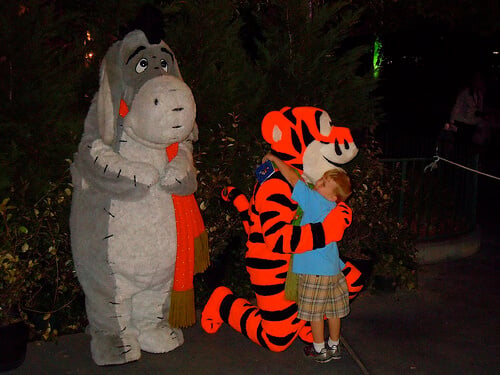 Back on the opposite side of Fantasyland, Eeyore and Tigger are not only available for photos and autographs, but even the occasional holiday hug. 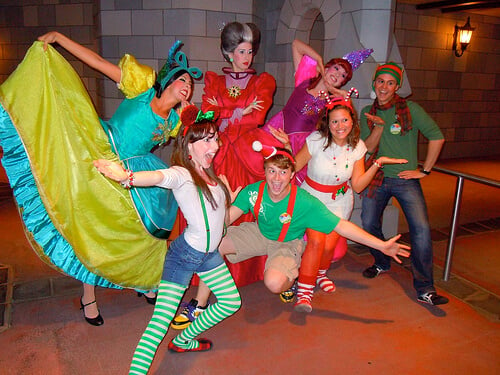 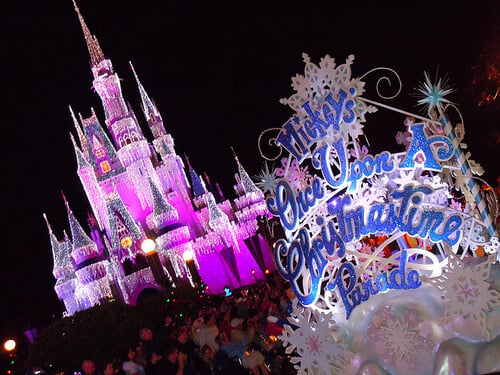 One of the highlights of Mickey’s Very Merry Christmas Party is the extra-long Mickey’s Once Upon a Christmastime Parade, which offers float after float filled with Disney and Christmas characters. This spot around the right side of the Hub is a fantastic vantage point for the parade, placing the twinkling, lit-up Cinderella Castle in the background. 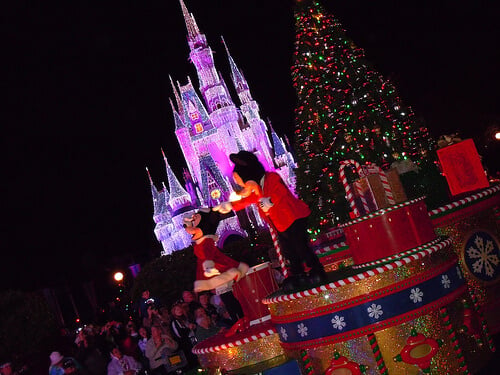 Of course, the stars of the show are Mickey and Minnie Mouse. 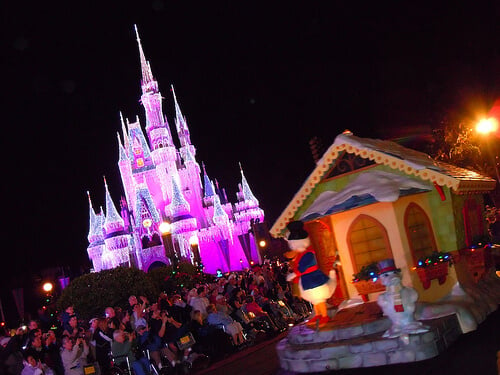 My favorite Disney character, Scrooge McDuck, also makes a grand appearance, with his own “Bah Humbug” snowman. Unfortunately, Scrooge is not posing for pictures at this year’s party, as he has done in the past. 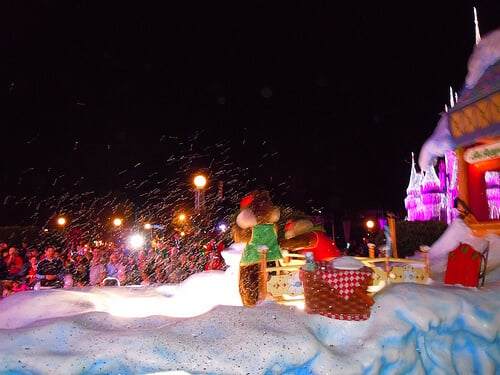 Chip and Dale are always up to no good, seen here launching a flurry of snow during the parade. 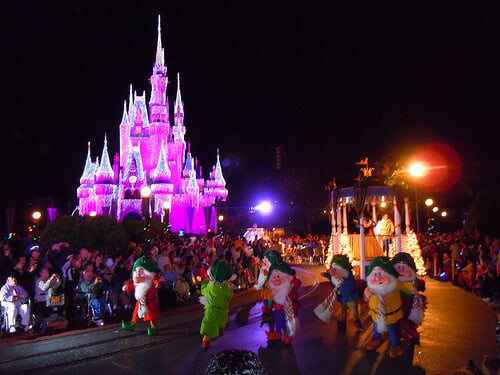 If you didn’t catch the seven dwarves’ meet-and-greet, you can still see them in the parade, along with Snow White and her prince. 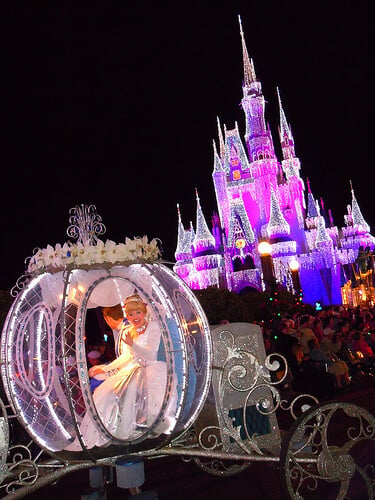 Picture-perfect moments happen all the time inside Disney’s theme parks, but it’s hard to top an appearance by Cinderella, with Prince Charming, in her pumpkin-turned-carriage, in front of her castle, lit up for the Christmas season. Only Mickey’s Very Merry Christmas Party can offer this incredible view. 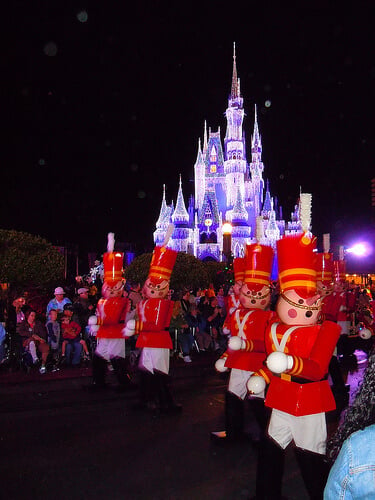 As the parade turns away from Disney and more to Christmas, toy soldiers spring to life, marching together in step. 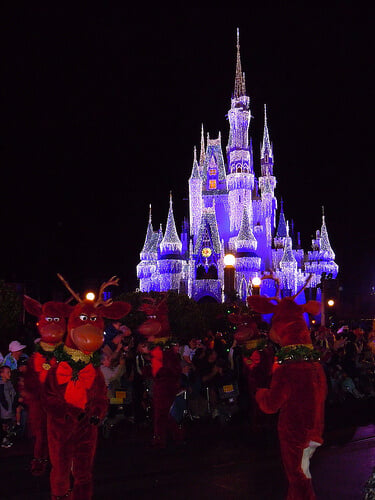 Santa’s reindeer dance around before the big man himself arrives. 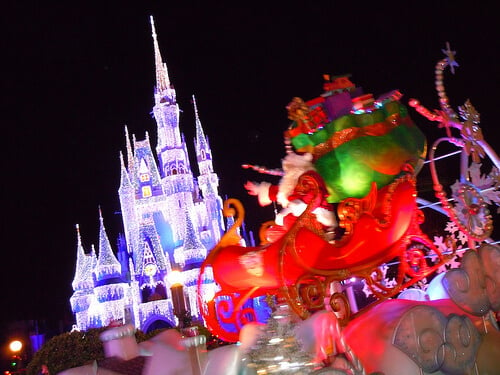 Capping off the parade, Santa Claus sits high atop his sleigh, shouting “ho ho ho” for all the good girls and boys. 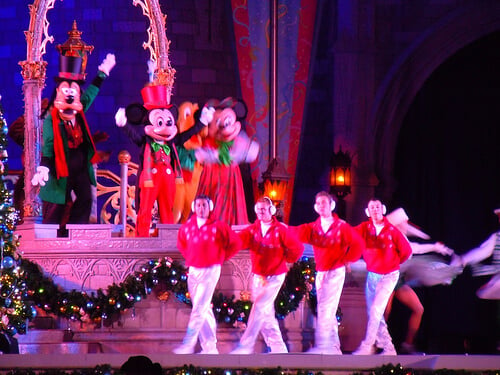 On the Cinderella Castle stage, Christmas comes alive through dance and song with the “Celebrate the Season” show, performed several times during the party. 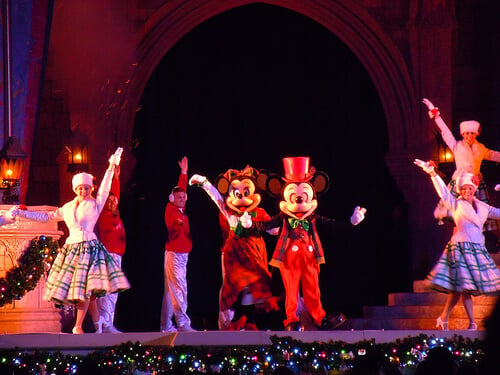 The stage show provides some excellent photo moments, provided that Mickey Mouse doesn’t blink!  I love new theme park technology, but this is an unintended side effect I could do without. 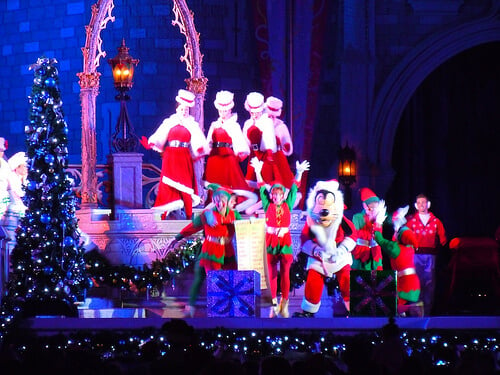 Looks like Santa Goofy was at it too, blinking just at the moment I snapped this photo.  Sigh. 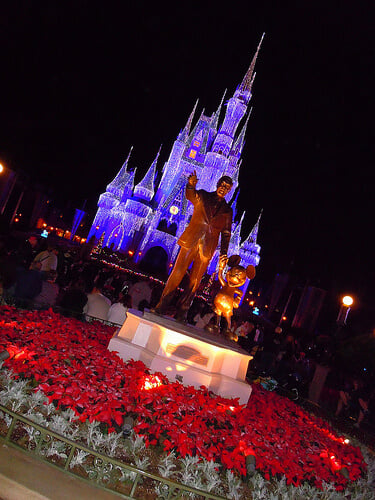 I’ll conclude our photo trip through Mickey’s Very Merry Christmas Party where we began, with another look at Cinderella Castle and the Partners statue.

It should be noted that while the party is filled with fun characters, meet-and-greets conclude 30 minutes before the night ends, at 11:30 pm, so act early to not miss your chance for a great photo.

Including tonight, Mickey’s Very Merry Christmas Party still has 14 more dates, occurring on select nights through December 19. The party requires a separate ticket from regular Magic Kingdom admission, but does allow guests to enter the park as early as 4pm, 3 hours before the party begins.

But if you already have Magic Kingdom tickets (perhaps a Walt Disney World annual pass) and want to save the extra money – and don’t mind large crowds – you can visit the park during the week of Christmas and see the same special parade and fireworks show (Holiday Wishes) at no extra cost.