Following a spectacle–filled celebrity event two nights ago, several Harry Potter film stars were in attendance at today’s grand opening ceremony, including none other than Harry Potter himself, Daniel Radcliffe, who personally welcomed the world into Hogsmeade Village and the rest of the Wizarding World, along with actors Rupert Grint, Tom Felton, Michael Gambon, James and Oliver Phelps, Bonnie Wright, and Warwick Davis.

After a few technical glitches, the opening event was streamed live online and was eventually able to be viewed around the world. We bring a video of it to you here:

Thousands of fans have gathered in and outside Islands of Adventure, with numbers reportedly as high as more than 5,000 waiting to get into the relatively small theme park area. Early this morning, the line reached as far as Marvel Superhero Island, wrapping around the park: 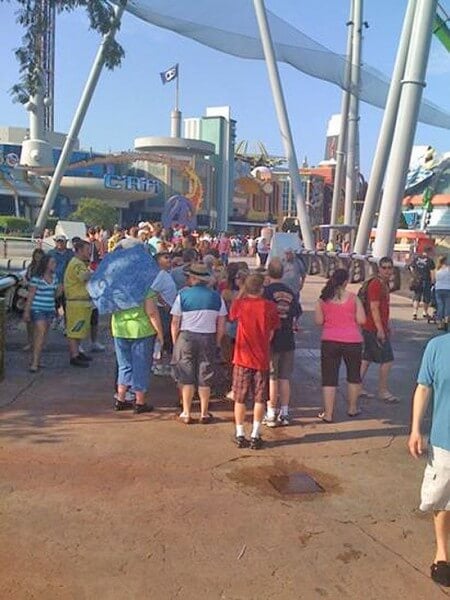 A large crowd of Guests has also been spotted lining up within nearby Universal CityWalk: 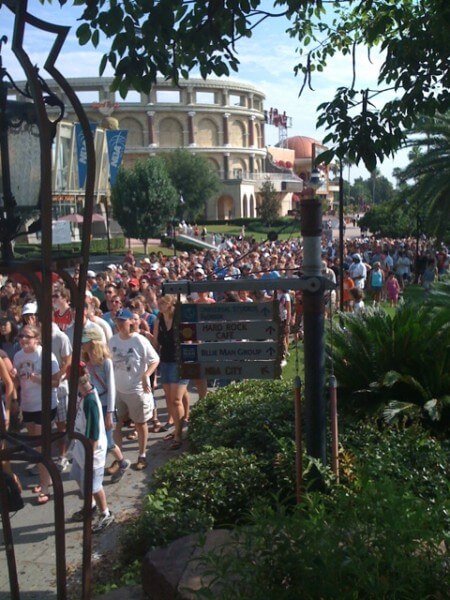 Universal is allowing Guests to enter the Wizarding World in phases, only letting small groups in at a time:

The streets, shops, and restaurants within the Wizarding World of Harry Potter are small. While Universal has not released specific capacity numbers, it is apparent that the area cannot handle everyone who showed up today all at once.

Guests are reportedly being told that the wait time to enter the Wizarding World could be as much as 6 hours today, a number expected to rise as more Guests arrive. Our recommendation here at Inside the Magic would be, if you can, to avoid being disappointed by today’s immense crowd and visit the Wizarding World at a later date. While being there on opening day is exciting, the near-record high heat and the large crowd may prove to be more than the average theme park Guest can handle.

Nevertheless, after many soft openings and special previews, the Wizarding World of Harry Potter has officially opened to muggles everywhere who can now walk through Hogsmeade Village, drink Butterbeer, get a magic wand at Ollivander’s Wand Shop, and even tour Hogwarts Castle and join Harry Potter on a Forbidden Journey through all of his adventures. It’s a great time to be a Harry Potter fan.

If you can’t make it to Orlando any time soon to experience all the fun yourself, you can virtually visit the Wizarding World of Harry Potter online via our popular videos, photos, articles, and reviews.