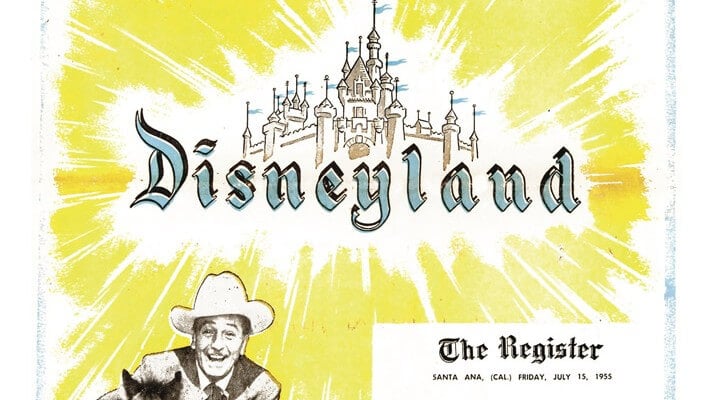 The Orange County Register celebrated Disneyland’s official diamond anniversary in a big way. They debuted a new Disneyland website at ocregister.com/disneyland and the also produced a 24-page anniversary section that ran in Friday’s newspaper. 2015 COLLECTIBLE SECTION
The 24-page section in the Register includes stories of people who attended, designed, built and worked at Disneyland when it first opened. It contains historic images and visually rich graphics to illustrate how the park has evolved from a 160-acre plot of sleepy farmland to the Happiest Place on Earth. Its contents include:

•A story on the first boy and girl through the gates, with photos then and now
•Innovations that are key to Disney’s success
•A story on the consultant hired to find the perfect spot for Disneyland
•A story on a Jungle Cruise skipper during Disneyland’s first year
•A photo collage of vintage Disneyland photos, with timelines
•Column from Marty Sklar, who led the Walt Disney Imagineering team for 30 years 1955 COLLECTIBLE SECTION
The Register, as it was called in 1955, published a 16-page special section on the weekend Disneyland opened that previewed what would be seen in the park. Dubbed the “Premiere Souvenir Edition Walt Disney’s Magic Kingdom,” the 1955 section features a message from Walt Disney himself on the front page, with stories inside detailing everything from the antique shops that graced Main Street U.S.A. to futuristic attractions like TWA’s Rocket to the Moon in Tomorrowland. Its historic headlines included:

Limited quantities of a 16-page souvenir section that originally ran in the Register during the park’s opening weekend in 1955 was reprinted, and distributed to all cast members late last week, and to the first 10,000 that arrived at Disneyland on Friday.

The Orange County Register has been nice enough to make sure that the public who may not have gotten a copy can now purchase them HERE You may order up to five copies of the 1955 and 2015 sections and pricing starts at $6.95

There is also a way for The Orange County Register subscribers and locals to get their hands on the issue.

Register seven-day subscribers may request a free copy of the 1955 collectible section at the Register’s headquarters at 625 N. Grand Ave. in Santa Ana by downloading a flyer through its Register Connect subscriber rewards site at ocregister.com/connect.

The public may also purchase the 1955 and 2015 collectible sections at the Register headquarters for $3.