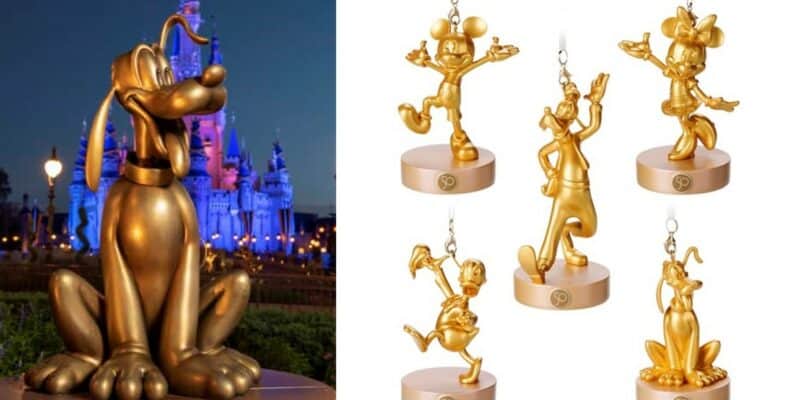 Get ready to bring a dose of Walt Disney World’s 50th Anniversary home with you! Now that we have officially welcomed November, Disney has revealed fantastic new holiday merchandise just in time for holiday shopping.

A fun experience that is part of Disney World’s 50th Anniversary celebration is the Fab 50 character collection which includes 50 Disney character statues spread throughout the four Parks. Now, new Disney ornament collections are available of these Fab 50 character sculptures. Just be prepared to pay $200 (plus tax and shipping) to have these little guys on your tree this Christmas!

The Fab 50 character collection has arrived in the Parks and they are absolutely stunning! Guests can now scavenger hunt through the four Disney World Parks looking for their favorite characters. Disney has thought up the smart idea to sell little replicas of select Fab 50 sculptures in ornament form. Check out the four sets of Fab 50 ornaments below:

The ornament first set is the Walt Disney World Fab 50 Character Collection Ornament Set – EPCOT available for $49.99. shopDisney’s description includes “We Join The World’s Most Magical Celebration with a boxed collection of five of our golden Fab 50 character ornaments corresponding to statues on display at EPCOT for Walt Disney World’s 50th Anniversary.”

The EPCOT set includes five ornaments of characters seen on display as Fab 50 statues at EPCOT including Miguel, Rocket Raccoon with Baby Groot, Olaf, and Figment. Plus, Joe Gardner as seen at Disney’s Hollywood Studios is also included in this EPCOT set.

Too cute! Keep in mind, there are a few Fab 50 character statues that are NOT included in what’s currently available on shopDisney. For example, at Magic Kingdom, you’ll find Stitch, but he is not available in a Fab 50 ornament set for Magic Kingdom Park. Miguel and Pua are examples missing from the EPCOT collection. R2-D2 is available, but BB-8 didn’t make Disney’s Hollywood Studios ornament set. All the Fab 50 statues from Disney’s Animal Kingdom are available, however. Purchase each set individually for $49.99.

Are you ready to have the four sets of the Fab 50 ornaments hanging on your tree this Christmas?