Recap: 'Star Wars: The Bad Batch' - "Entombed" - Inside the Magic 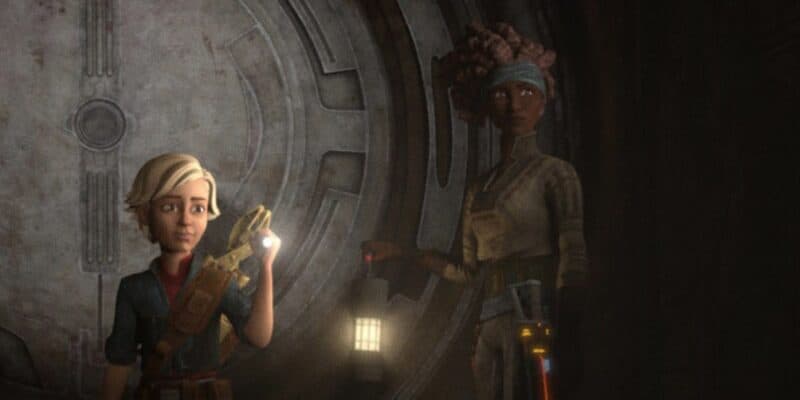 After last week’s episode saw our unlikely heroes involved in some high-speed motorsports, this week’s episode of Star Wars – The Bad Batch (2021) sees Clone Force 99 come for Indiana Jones’ gig as they raid a mysterious vault for unknown treasures.

The episode opens with Wrecker (Dee Bradley Baker, who voices all of the Bad Batch clones) and Omega (Michelle Ang) picking through a junkyard for a compressor. While there, Omega picks up an unusual artifact.

Back at Cid’s bar (Rhea Perlman), Phee (Wanda Sykes) is regaling patrons with stories of her past treasure-hunting exploits. When Omega presents her junkyard find, Phee tells her it’s a rare lead and contains mysterious co-ordinates for a location in the Kaldar Trinary System, on an uncharted planet.

The gang head off to the desolate world and discover scorched earth. Something has blasted the life off the planet’s surface. The compass leads them to a mountain wall, and Phee’s intuition uncovers a hidden entrance. With Wrecker’s help, they open it up, revealing markings from the Skara Nal — an ancient civilisation which pre-dates the Jedi. Phee tells the group they are on the trail of the Heart of the Mountain, a legendary treasure.

So begins an adventure through the booby-trapped mountain passage. Their first obstacle is a wall of symbols to be aligned. Lining up the obvious ones leads to them being entombed — get it? — within the mountain itself. But Omega uses the compass to discover a second layer of glowing markings, the ones which will open up the next step of their journey.

As they continue, Phee reveals that the Heart is actually a key to unlocking an ancient superpower. Her knowledge of galactic folklore is coming in very useful: Tech confirms she is pretty accurate, with his readings indicating the ruin to be very old indeed.

The gang is split up after being attacked by a vicious creature within the tunnels, with Omega, Wrecker and Phee forced to continue alone. They come to a round tunnel which, when Wrecker steps on the surface, nearly causes him to fall to his death.

Omega comes to the rescue once again, using the compass to identify safe passage on the ceiling of the tunnel, and then fitting it into a wall slot which allows her to rotate it and make it walkable. It means the compass is lost, but Phee says it has fulfilled it’s purpose. As the group come to the vault door, they are all reunited.

Phee opens the door and within finds the glowing Heart keystone. Retrieving it from it’s pedestal causes the walls of the vault to begin to glow. A huge energy beam blasts through the mountain top and it crumbles, revealing the group to have been venturing within a giant machine.

The striding walker — which looks uncannily like a similar machine from the Horizon series of videogames — begins a slow march across the landscape, blasting a devastating beam in front of it.

Hunter says they have to shut it down before it destroys their ship and their only way off-world. Tech says Phee has to re-insert the keystone, but as she tries to do so, the creature from earlier returns.

There’s a fraught struggle as Phee scrambles to grab the key and the rest of the gang fend off the monster. As she manages to do so, the massive machine begins to shudder, exploding and ending its reign of destruction. Phee’s droid Mel has been a casualty of the disaster, but Phee is unbothered, saying it has happened before and she can restore Mel from a saved backup on her ship.

As they had back to their exit, Phee says the group will be heading to Vadnay next, to retrieve an ancient chalice. Omega looks enchanted, while Hunter looks exhausted by her treasure tales.

Did you enjoy the adventure in this week’s episode of The Bad Batch? Tell us in the comments below.