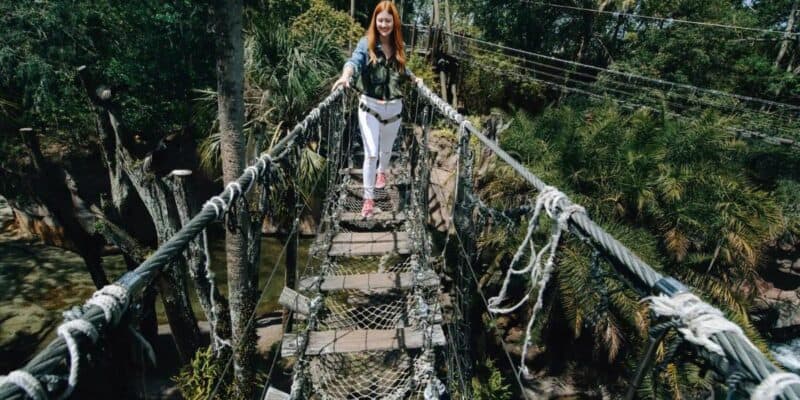 Disney’s Animal Kingdom is known for its animal and nature-inspired attractions and entertainment, as well as the incredible wildlife, which you can observe from the Kilimanjaro Safaris, the Discovery Island Trails, and more!

Have you ever wanted to go on a safari or an African excursion but were never able? Now, if you’re going to visit Disney’s Animal Kingdom at Walt Disney World Resort, you can!

Related: Walt Disney World specialty and VIP tours: Which ones are worth the price?

A new TikTok from @boundingwithtarri goes behind the scenes of the Wild Africa Trek in Animal Kingdom.

In the video, @boundingwithtarri explains what happens on the Wild Africa Trek, giving an insider’s look at some of the adventures that you can expect from this tour, including using harnesses, walking over rope bridges, and seeing the animals up close on a safari.

Some of the animals that the video creator had seen up close on the tour were hippos and crocodiles. She was able to see some hippo training and learn more about the crocodiles as well.

Related: 10 Unique Disney Park Activities For The Last Day Of Your Vacation

In addition to the animal experiences, she and the tour group enjoyed some African-inspired cuisine, including hummus, shrimp, fruit, meat and cheese, and more. Other perks of the tour included a complimentary photo service, a water bottle, and the ability to see these beautiful animals up close.

Here is the sample menu from the tour’s webpage. The poster also indicated in the comments of the video that there are other menu options for those with allergies or dietary restrictions:

Several commenters were intrigued by this tour, many of which had never heard of it, despite having gone to the Park several times (or in some cases, being a Cast Member). Some praised the tour guide that @boundingwithtarri had, saying she was incredible and loves the animals so much. Other commenters agreed with the poster’s overall sentiment of the trek, saying this was worth the price and was the best tour they’ve ever done.

This separately-ticketed event is a three-hour tour that costs $200 per person. The cost might seem steep, but @boundingwithtarri explains that it is definitely worth the price, as it was a highlight of her trip. For more information on tour availability, what to know ahead of time, and more, visit the tour page on Disney World’s website.

Have you ever taken the Wild Africa Trek tour at Animal Kingdom?