Kathleen Kennedy: Ten Movies She Helped Create - Inside the Magic 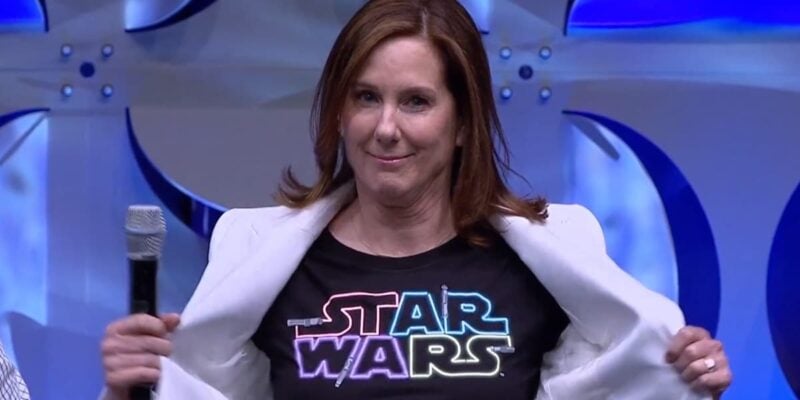 Kathleen Kennedy is a legend in the movie-making business. She rarely receives recognition for her efforts behind the camera, but she has been a key player in bringing some of blockbuster cinema’s most iconic movies, with legions of fans, to the big screen for decades.

Who Is Kathleen Kennedy?

Kathleen Kennedy is a long-time American film producer and the now-President of Lucasfilm, inheriting the title and baton from George Lucas himself in 2012 after he sold the entertainment monolith to Disney. Kennedy’s early career saw her work on the Indiana Jones film franchise (including the last return to the big screen Indiana Jones and the Kingdom of the Crystal Skull (2008)), and she received her first major producer credit in 1982 on E.T: The Extra-Terrestrial.

Her current work at Lucasfilm has seen her lead on the revival of Star Wars under the Disney umbrella, including the successful sequel franchise, including Rian Johnson’s Star Wars Episode VIII – The Last Jedi (2018), Rogue One: A Star Wars Story (2016) and the dive back into Han Solo’s youth in Solo: A Star Wars Story (2018). She was also part of the move into Star Wars TV with hit shows such as The Mandalorian (2019), Hayden Christensen and Ewan MacGregor’s return in Kenobi (2022) and Diego Luna’s star vehicle, show run by Tony Gilroy, Andor (2022).

Her working relationship with legendary filmmaker Steven Spielberg has seen her name appear on some of the most famous movies of the last 40 years, as the pair collaborated on everything from the aforementioned Indy series to the creation of the Jurassic Park (1993) film franchise.

She has more than 70 feature film credits to her name, with more than 120 Academy Award nominations and 27 wins. She’s been recognized with the Irving G Thalberg Memorial Award from the Academy, and in the UK, the British Academy of Film and Television Arts granted her the Fellowship Award, the highest honor they can bestow, for her contributions to cinema.

Before beginning her tenure heading up Lucasfilm in 2012, she headed The Kennedy/Marshall Company, which she founded in 1992 with director/producer and husband Frank Marshall. In 1981 she co-founded Amblin Entertainment with Marshall and Steven Spielberg.

What Films Has She Worked On?

As Kennedy’s producing debut, this one is a home run. A modern family classic, this story of a wayward alien finding his way home — and a place in the heart of a broken family — is a warm-hearted hug of a sci-fi adventure. Kennedy worked with Spielberg to develop the story and was part of the key process of finding the right person to create the script from which they could create the rest.

Kennedy had just worked with Spielberg on Raiders of the Lost Ark (1981) it was during a set visit from writer Melissa Mathison, who was visiting her then-boyfriend Harrison Ford, that Kennedy and Spielberg thought she could be the right person to bring this story to life.

Speaking to Collider, she revealed this was no easy debut gig:

This is the first movie I ever produced. I was throwing up every weekend. I was so nervous. I had no idea what I was doing. So I have to confess I wasn’t thinking other than day to day and making sure everyone was happy. I was as nervous as the [kids] were.

Talking about whether the success of this first solo venture gave her a lot of pressure to keep aiming higher, she said:

I had the wonderful good fortune to be involved in something that successful and that connected completely to audiences at the time. And I cherish little bits of that throughout my entire career.

Kennedy’s involvement in Temple of Doom might be more personal than any of her other credits: she appears in the film herself twice. Working alongside Spielberg and Frank Marshall, she was involved in the movie’s tumultuous production, helping to negotiate the last-minute change of plan after the Indian government banned the film’s production in the country due to the black magic and occult themes in the plot.

But clearly, there was time for levity, with Kennedy making a cameo appearance as one of the dancers in the opening ‘Club Obi-Wan’ sequence.

Kennedy became involved in executive-producing the Back to the Future franchise as part of her work with Amblin Entertainment, the production company she established alongside Spielberg and Marshall. Amblin was chosen by director Robert Zemeckis after he opted not to pursue studios who had rejected his pitch for the project a few years before the first film truly began development in the mid-Eighties. It’s another iconic franchise that Kennedy can claim her involvement in.

As Spielberg’s right-hand woman, Kennedy had a pivotal role to play in not only helping bring dinosaurs to the big screen but helping the CGI revolution hit Hollywood when Industrial Light and Magic revolutionized digital effects to create prehistoric creatures for the movie.

But what you might not know is that when Hurricane Iniki hit Hawaii in 1992, causing widespread devastation and a lockdown on flights, it was Kennedy who managed to find them all a way home. The long-time producer ran into Fred Sorenson, who had played pilot Jock in Indiana Jones and the Raiders of the Lost Ark (1981), now working as a pilot for Hawaiian Air Lines. She used her history and this pivotal connection to hire Sorenson to fly the production crew and talent — including stars Sam Neill, Laura Dern and Jeff Goldblum — out of the country.

With The Sixth Sense, The Kennedy/Marshall Company helped bring one of modern cinema’s most iconic twists — and a terrifying ghost story — to the big screen. Director M. Night Shyamalan’s vision of a haunted man, played by Bruce Willis, interacting with a psychic boy (Haley Joel Osment), might only have been his third feature directing job, but it led to a Best Picture Oscar nomination for himself, Kennedy and Marshall.

Horror doesn’t appear too much in Kennedy’s credits, but when it does, she picks winners: she also worked as an Associate Producer on Poltergeist (1982).

War of the Worlds is a movie that only Spielberg and his crack team, including Kennedy, could have made work — and made it speak to the time it was released too. His retelling of the classic sci-fi tale is a terrifying vision of what could actually happen in the event of a real alien invasion. It’s a far cry from the wonder of Close Encounters of the Third Kind (1979) or the cuddly E.T: The Extra-Terrestrial. This is alien warfare in a post-9/11 world, the fear of a country still quaking from the attacks in 2001 resonating in his movie.

Speaking about the movie in the production notes, Kennedy said:

Studio Ghibli’s enchanting movies have stunned audiences with sumptuous visuals and immortal stories. Kennedy was a key part of bringing the stories to a Western audience with the US dubs of some of their titles, including the classic Ponyo, as part of the Kennedy/Marshall Company.

Kennedy has spoken about her and Frank Marshall’s mission to bring Ghibli and director Hayao Miyazaki’s work to a global audience, helping collaborate with a stellar cast featuring stars such as Cate Blanchett, Matt Damon and Liam Neeson.

Lincoln was a huge critical success. The historical drama, covering a key period in U.S. President Abraham Lincoln’s life as he pursued the abolishment of slavery, was nominated for 12 Academy Awards, including Best Picture and Best Director.

Kennedy’s involvement was key to making it a thriving and successful work environment. Speaking at a 2013 ceremony to present Kennedy with the Pioneer of the Year Award by the Will Rogers Motion Picture Pioneers Foundation, Lincoln star Sally Field said:

“As an actor, every moment of working on that film (Lincoln) was perfect…

“In an industry that is not and has not been female friendly… Kathy has beaten those odds the only way a woman can – by being so much better than… everyone else.”

The Force Awakens marked the end of a decade since Star Wars had been on the big screen and the start of a new trilogy in the saga, one freshly under the Disney umbrella and Kennedy’s stewardship as the Lucasfilm head.

The movie invigorated a whole new generation with interest in the world originally created by George Lucas and started a wave of new titles, which are controversial within the heated, opinionated Star Wars fan base, have added undeniable new worlds and storytelling opportunities in a galaxy far, far away.

Indiana Jones and the Dial of Destiny (2023)

For her next venture, Kennedy is returning to a franchise she helped start in the Eighties: Indiana Jones. The Dial of Destiny sees star Harrison Ford return to the adventure series once more, this time joined by Phoebe-Waller Bridge as Henry Jones Jr.’s goddaughter Helena and facing off against villains Mads Mikkelsen and Boyd Holbrook. Questions have been raised over the character’s fate beyond this installment, but Kennedy will no doubt be there no matter what if the story of this iconic explorer continues.

What’s your favorite movie Kathleen Kennedy has worked on? Tell us in the comments below.