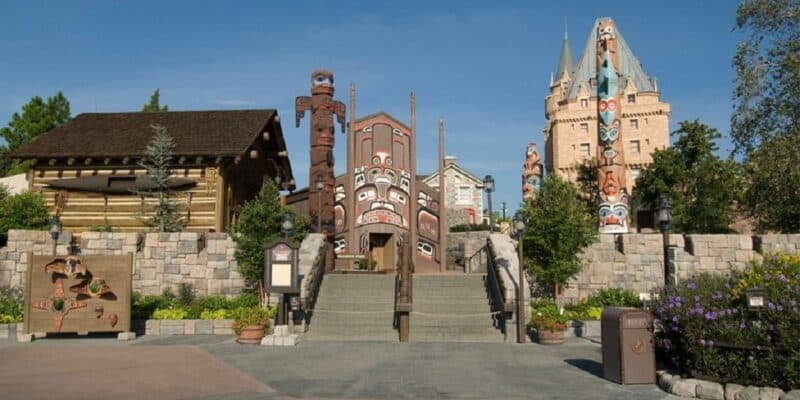 D23 gives us an inside look at where to find this beautiful art at the Resort to celebrate this special month.

First, there is the EPCOT American Heritage Gallery. This is located in the American Adventure Pavilion at EPCOT’s World Showcase. This experience has interactive displays for Guests to delve more into Native American art, history, and artifacts, by way of narration by some of the artists whose work is displayed in the gallery.

The gallery represents Native American communities from seven regions of the United States. It also has several artifacts, as well as more modern works of Native American art.

At the Canada Pavilion inside EPCOT’s World Showcase, Guests can find hand-carved totem poles. These were created by David Boxley, a Tsimshian artisan, who created his first totem pole for Canada Pavilion’s Trading Post back in the 1990s. He then created two more in 2017.

D23 delves more into the story behind these totem poles:

The recognizable Eagle Totem Pole represents a famous cultural folktale in which a boy finds an eagle caught in a net and frees it. Years later, when hunger strikes the boy’s tribe, he walks on the same beach, only to find the eagle there waiting for him with food as payback for his kindness. Boxley’s Whale Totem Pole tells the tale of the first potlatch, a ceremonial feast celebrated by the Nagunaks and creatures of the sea.

Here is a description of this incredible lodge and what Native American art and artifacts Guests can find here, per D23:

Disney’s Wilderness Lodge is a resort hotel inspired by turn-of-the-century National Park lodges and celebrates American craftsmanship and the beauty of the untamed wilderness. While this hotel offers many unique experiences, such as nature trails and scenic overlooks, there is also plenty of Native American-inspired art to see in the lobby. Amid ceiling-high totem poles, headdresses, and various replicas of Native artifacts and art pieces, take the time to enjoy the hidden gems at this unique resort.

Next time you’re at Disney World, check out these various locations and enjoy these beautiful Native American art pieces!

Have you ever noticed this Native American art at Disney World before? Tell us below in the comments!