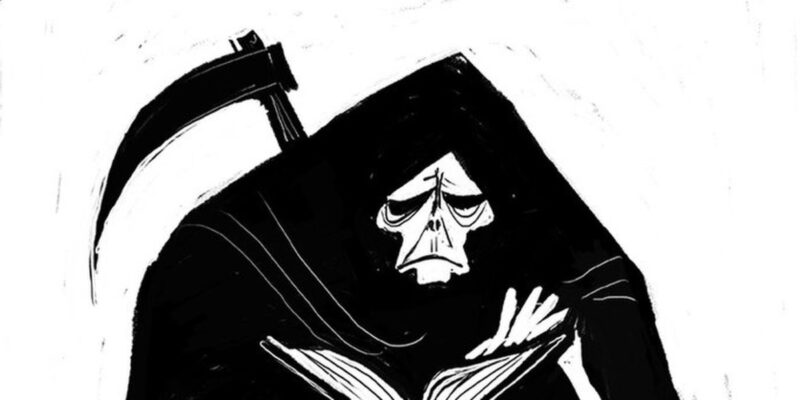 A story about a young man who gets a job working as the grim reaper’s apprentice doesn’t exactly sound like the most Disneyfied fairytale in the book, but Terry Pratchet’s Mort almost became an animated masterpiece.

With films like The Black Cauldron and The Nightmare Before Christmas, its clear Disney knows how to handle the dark fantasy genre, but knowing they almost took a dive into Terry Pratchett’s Discworld novels is more than a little bit bizarre. In 2019, concept art for this ghoulish delight surfaced and fans were given a glimpse of the gothic comedy that might have been. With that in mind, it’s a wonder Disney hasn’t revisited this piece with the success of adaptations of Good Omens (cowritten by Pratchett) and other strange and unusual films. Needless to say, there is definitely an audience for this type of project.

For those who aren’t familiar, the Discworld books are a series of fantasy comedies by the late Sir Terry Pratchett. Think of them as Harry Potter or Shrek by way of Monty Python and the Holy Grail. While there are certainly more than a handful of books that Disney could very well adapt, The Color of Magic and The Amazing Maurice and His Educated Rodents have a certain potential, Mort was more than likely not at the top of everyone’s list.

Mort concerns Death, as in the grim reaper himself, and the titular young man he takes on as an apprentice. In a plot concerning his master’s morbid fascination with humanity, no pun intended, Mort falls head-over-heels for Death’s daughter and a black comedy ensues. While this might not sound like the typical Disney production at first, there is a certain Nightmare-Before-Christmas-esque flavor about the plot.

With films like Hocus Pocus 2 reaching the top of Disney+’s watchlist, there’s practically never been a better time for Disney to explore the stranger subject matter, even outside of Halloween. With many fans wanting Disney to return to the fairytale and fantasy formula, something like the unmade Mort would more than likely gather a fan following, possibly even becoming a cult favorite if given to the right creative team. That being said, it might be harder to bring to life considering the most qualified director, Tim Burton, has recently walked away from the studio.

Related: When Disney Movies Get Gory

Of course, this is all speculation. Of all the words of tongue and pen, the saddest are “it might have been.” Disney has a laundry list of projects that never made it out of concept art, much like Mort, but that doesn’t mean they have to remain lost. With more attention to the constantly-developing tastes of their fanbase, Disney might pick this project up again.

Would you have gone to see Mort? Tell us in the comments below!